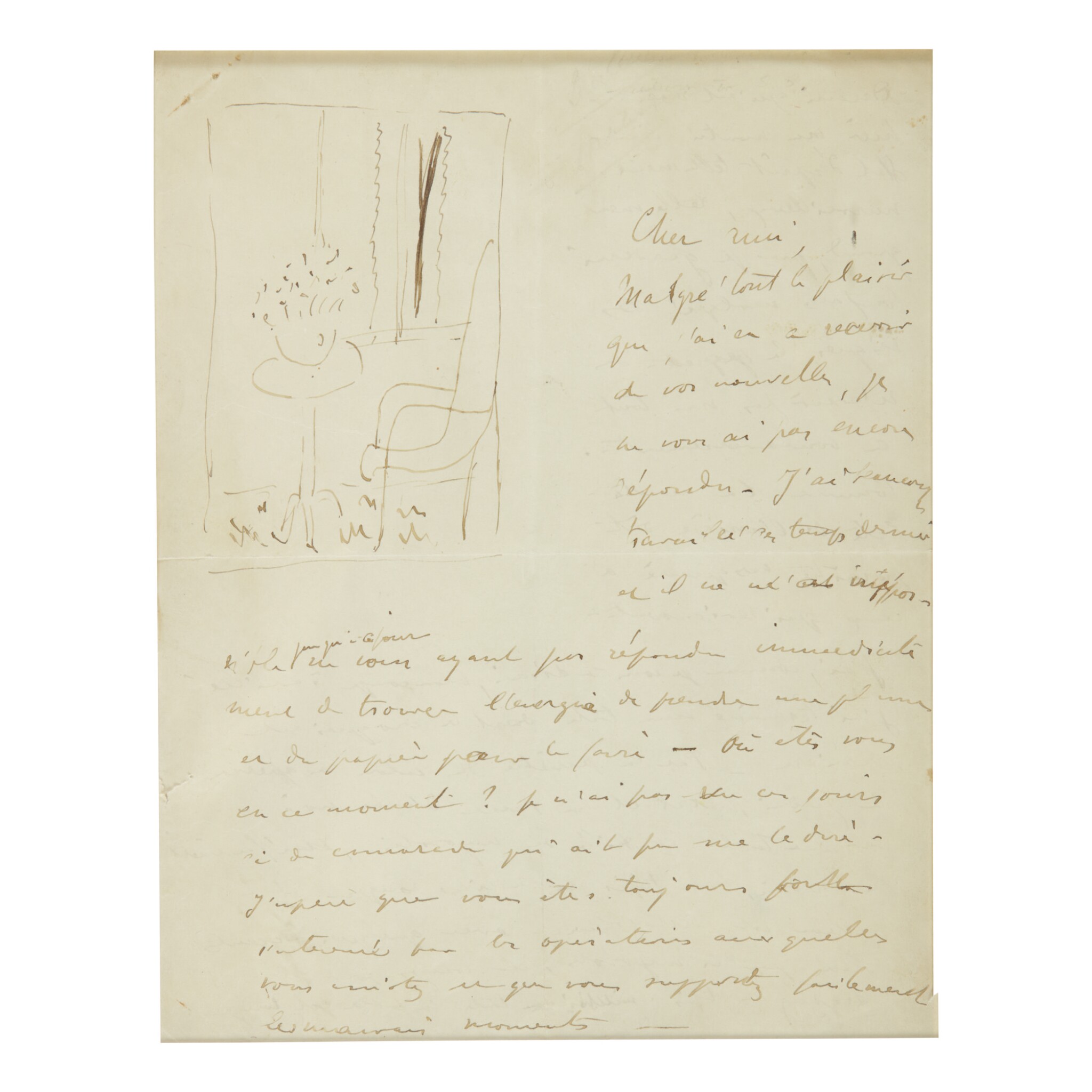 An important and lengthy letter describing the artist's work in Nice in the summer of 1916, including two integral sketches, and a discussion of the events of World War I

Léonce Rosenberg was an influential art historian, collector, and art dealer who, along with his brother Paul, handled a number of Matisse's canvasses. Writing to him in the summer of 1916, when Rosenberg was serving with the Allied forces on the Somme front, the artist speaks at length about his ongoing artistic endeavors. After some pleasantries and well-wishes, he goes on to describe a visit from André Derain, his fellow Fauve and friendly rival: "Derain came back yesterday in wonderful high spirits, spirits so great that I will always cherish them, despite the risks he took and his regret at not having seen all the destruction."

Matisse both sketches and describes his painting "The Window, (Interior with Forget-me-nots)" now in the permanent collection of the Detroit Institute of Arts, acquired 30 January 1922 at the Dirkan Kelekian sale at the American Art Association. Of the painting, Matisse writes: "I've been working a great deal. On the verso is a sketch of the oil I have just finished. Through the window of the drawing-room one sees the green garden and a black tree trunk. On a table [a] basket of forget-me-nots, a garden chair, a carpet pattered in red. The painting is green [and] white with blue accents for the forget-me-nots and red for the zigzag of the carpet. Also the table is entirely red."

The artist then goes on to address his work on an ongoing canvas, his monumental "Bathers by a River," now in the collection of the Art Institute of Chicago, noting: "I have resumed work on a large painting of 5 meters representing women bathing." "Bathers" is one of the artist's most noteworthy works, comprised of four faceless, columnar figures against a muted background of green, black, white, and blue panels. The relative sobriety of his bathers composition, finished in 1917, is perhaps a reflection of the artist's concerns over the destruction of World War I, which he here muses upon at length, and with considerable pathos:

"This war will have had its repercussions; what weight it will have given our lives, even to those who have not participated in it. If only they could put themselves in the shoes of the common man, who gives his life without really knowing why, but who grasps the necessity of the gift. I hope my musings on the 'man of the home front' will not cause you to judge him too severely. Painters, and I in particular, are rarely able to translate their thoughts into words — subsequently this 'man on the home front' feels helpless."