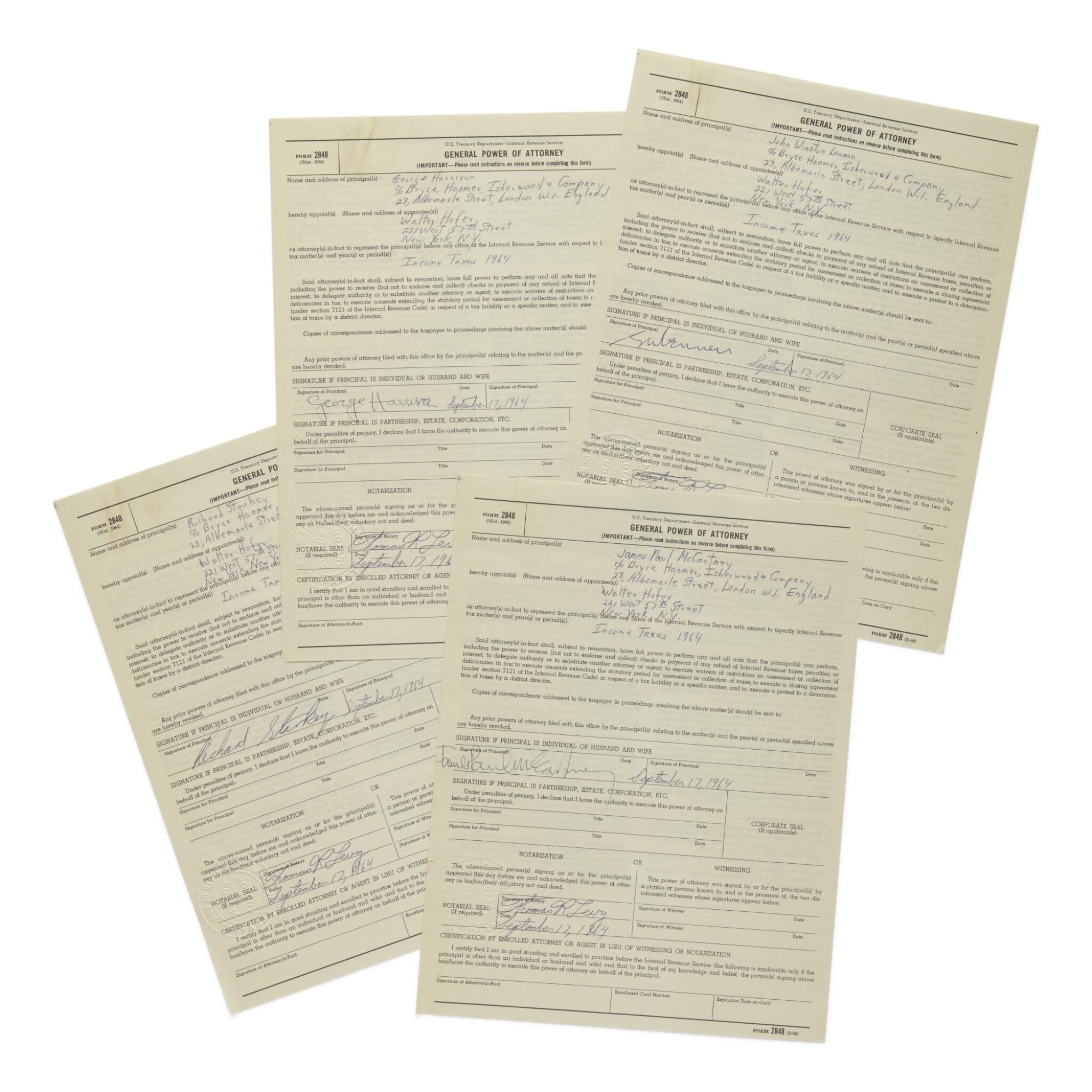 Archive related to taxation of the first Beatles tour of the United States, containing three full band signatures, and one signature from Brian Epstein, 1964

(iii) Escrow Agreement, xerox copy, 5 pages (13 x 8½ in.), [New York?], 1964, outlining the deposit of $328,271.25 in escrow as a trust fund for the United States to secure the payment of tax liability finally determined to be due from NEMS Enterprises, Ltd., and The Beatles; signed on the terminal page by all four Beatles, and Brian Epstein. [With] Xerox copies of each band members' U.S. Nonresident Alien Income Tax Returns from 1964,1965, and 1966.

The Beatles come to America, and meet the Taxman

Seventy-three million viewers gathered in front of their television sets on 9 February 1964 to watch as the Beatles make their first live American television appearance on The Ed Sullivan Show, a record breaking audience that encompassed roughly one third of the population of the United States. As the Fab Four embarked on their first US tours that year, there was no doubt that Beatlemania had come to American shores. It was a pivotal year of expansion for the band, one that would introduce them to a worldwide audience, and unprecedented levels of fame.

The staggering acceleration of Beatlemania quickly proved somewhat overwhelming for their management team, though the indispensable Brian Epstein did everything he could to position the band for success. In late 1963, as Epstein began to lay the groundwork for their introduction to American audiences, he engaged entertainment attorney Walter Hofer as his legal representative in the United States. Hofer would prove instrumental in navigating the complexities of their first year in the American market — liaising with EMI and their American subsidiary Capitol Records, assisting in negotiations with The Ed Sullivan Show, and helping to organize the Winter and Summer US Tours.

The second leg of their US tour began on 19 August in San Francisco, and included 32 dates in 24 cities over the following month, and "everywhere they went, there were greater displays of mayhem" (Spitz, p. 531). The Kansas City gig at Municipal Stadium on 17 September hadn't been originally included on their itinerary, but when Charles Finley (the owner of Kansas City Athletics), offered Epstein a staggering $150,000 fee regardless of ticket sales, the manager was compelled to accept, though the band members weren't particularly keen to lose one of their precious few days off. The band made the Muehlebach Tower Hotel their headquarters for the gig, which is where items i. & ii. in the present lot were executed. Prior to the performance, they held a press conference on the top floor of the hotel, where they joked with reporters with characteristic panache. Including the following exchange:

Young girl: "How much does the United States government get from what you earn?"

Q: "What about the British government?"

Ringo: "The British government are getting..."

Ringo: "We'll end up with ten dollars when we get home."

This exchange was quite possibly inspired by the events of that day, which are reflected in the present archive. Epstein had failed to ensure that the necessary Internal Revenue Service foreign-withholding tax forms were filled out in advance of their tour, which resulted in some last-minute scrambling on the part of Hofer and his associates. Attorney Thomas Levy, who worked for Hofer in 1964 and whose notarial seal is seen throughout the archive, recalled, "Walter came into my office one afternoon and asked, 'You have anything that you can't get out of this afternoon? ... I want you to go to Kansas City. We need to get some documents completed for the Beatles so they can get tax clearance. They're leaving the U.S. next week.'" The band was scheduled to return to England on September 21, but their passports were needed for Hofer's firm to complete the necessary IRS processes. Levy traveled to Kansas City, where he obtained the band members' signatures, each executing an IRS General Power of Attorney, and a New York State General Power of Attorney, before collecting their passports and returning to New York. (Soocher, pp. 10-11).

Though the Fab Four were able to return to England on schedule and round out their legendary year with a fall UK tour, their tax complications were far from over. According to the escrow agreement in the current archive (item iii), the concert earnings from August 19 to September 20 netted the Beatles $1,094,237 gross (or about 9 million dollars today). Hofer's firm, acting on behalf of NEMS, entered into an agreement with the IRS to place $328,271.25 in escrow while the US and UK negotiated tax liabilities. As Epstein would later comment: "The money has got to be paid to someone in tax, and Washington and London are trying to decide who'll scoop the lot."

All things told, 1964 was a remarkable year for the Beatles. By the end of that year, the band had placed 28 records in Billboard’s Hot 100 Singles chart, (11 of which where in the Top 10), and taken in $25 million in earnings, which translates to an excess of $200 million today. The present lot, which contains three signatures from each band member, and one signature from "the fifth Beatle" Brian Epstein, reflects the growing financial complications for the band as their newly found international fame and success brought them to new heights.

Signed documents relating to critical moments in The Beatles' career are quite desirable — their 1962 managerial contract with Brian Epstein achieved £365,000 in 2015, and McCartney's 1970 Affidavit initiating the lawsuit that would break up the band achieved $125,000 in 2018.

Stan Soocher. Baby You're a Rich Man: Suing the Beatles for Fun and Profit. ForeEdge, 2015; Bob Spitz. The Beatles; The Biography. Back Bay Books, 2005