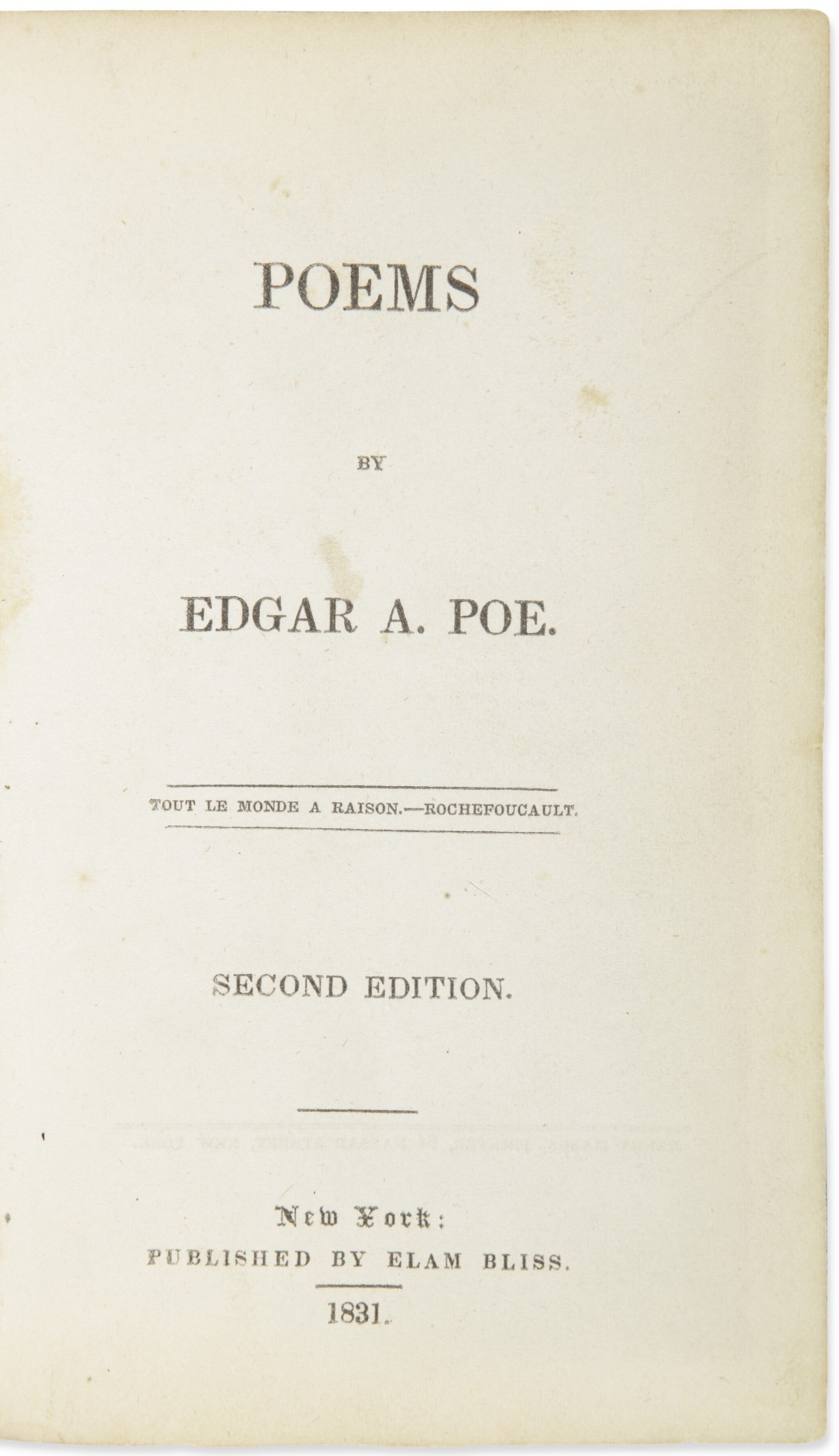 12mo. Half-title. Bound for the recipient John Neal, his name in gilt at spine tail, in contemporary half black calf gilt, the original yellow-coated endpaper preserved though browned and so Poe's presentation is very much faded but for a few letters. Red morocco case.

Before moving to Portland, Maine in the late 1820s to edit and publish his two monthly magazines, John Neal worked in Baltimore and was known to Poe's friends and family. Poe wrote to Neal in 1829, offering his poem "Fairyland," and Neal responded in print "If E.A.P. of Baltimore.... would but do himself justice, [he] might make a beautiful and perhaps a magnificent poem."

Poe, who was not yet 20 and deeply moved by the encouragement, responded to Neal with a letter about his new book (Al Aaraaf, Tamerlane and Minor Poems) and his feeling that he was a poet "if deep worship of all beauty can make me one." To Poe's sure delight, Neal published not only extracts from the letter, but selections from the poems Poe had enclosed.

Shortly thereafter Poe endured West Point for 8 months until he was removed by court martial for refusing all classes and duties. Nevertheless, he was able to convince 131 of 232 of his fellow cadets to each contribute $1.25 to produce the present book of poems. The printing was a small one, with perhaps as few as 500 produced. Although called second edition on the title-page, as Poe considered it to be because of his earlier issuing of Al Aaraaf,  this is in fact the first edition with this title. Those poems previously published are in the revised form along with previously unpublished additions including "To Helen" "Isafel" "Irene" and "Lenore."

Only about 20 copies survive, with only a handful of those owned privately. The roll call of legendary collectors of the present copy is fairly staggering - Stoddard, Gredes, Locker-Lampson, Church, Wakeman, H. Bradley Martin, and Susan Tane.

Poems' rarity is such that only four other copies have appeared at auction since 1894, including one in poor condition and another with parts in facsimile. The present is the only known inscribed copy.

The notes on this copy's provenance in the Bradley Martin sale, Sotheby's New York, 30 January 1990, lot 2193, provide a full accounting up to that sale of the legendary dealers (Rosenbach and Wells for instance) with dates of the following collectors' acquisition: