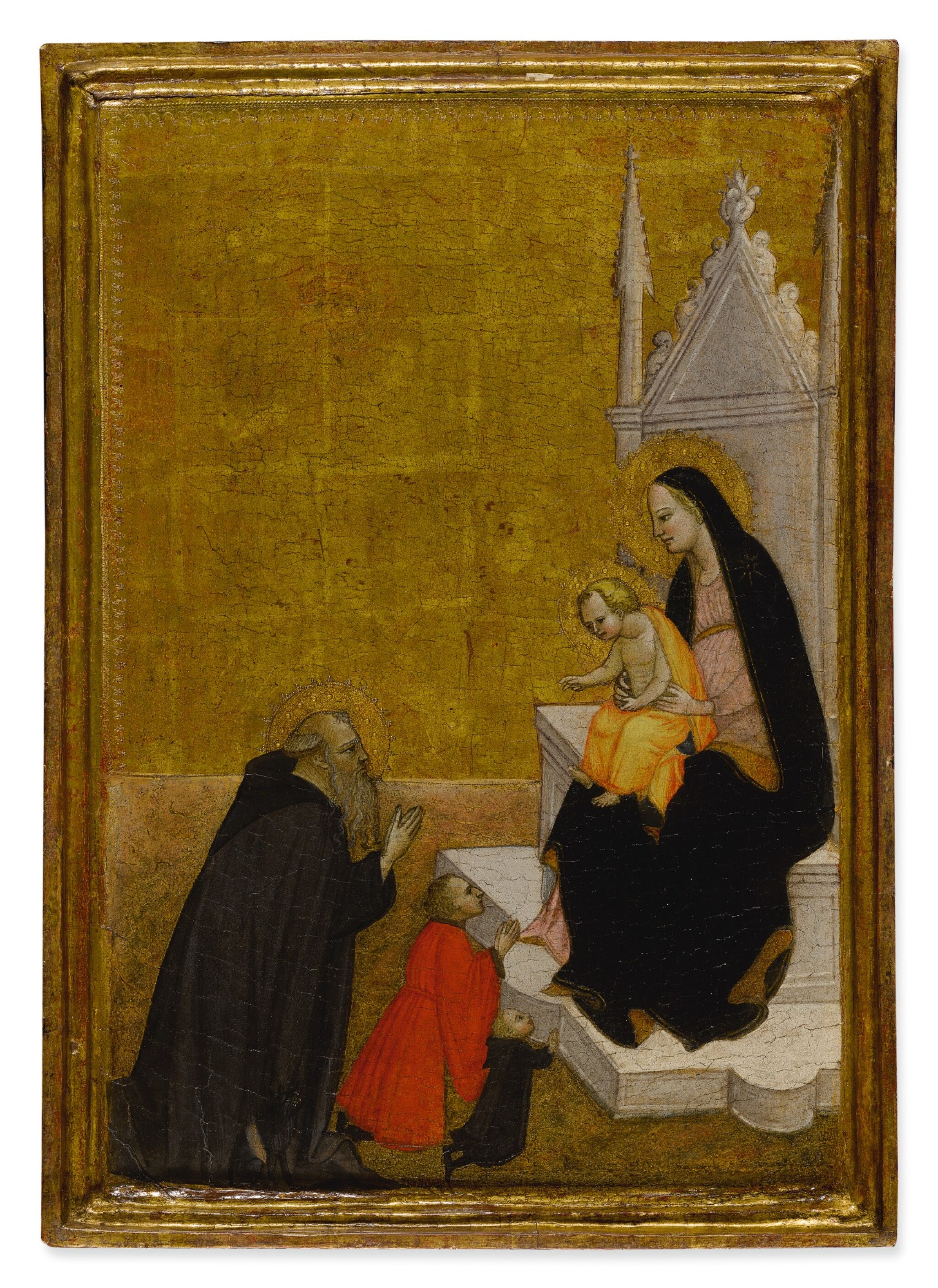 MADONNA AND CHILD WITH SAINT ANTHONY AND TWO DONORS

This well-matched pair of scenes have been restored to a high level, highlighting the crisp contours and linear elements. Not obvious under either normal or ultra-violet light, retouching reinforces the sharpness of the details drawn in with paint, enhances the vibrancy of the palette, and knits together wear along the age-related craquelure. Both horizontally grained boards are in sound condition. The Dormition of the Virgin has been painted on a single board, while The Birth and Presentation is comprised of two boards with a join running across the middle of the panel. On the reverse of The Birth and Presentation, a deep recess for a butterfly insert spanning the join is visible. The varnish is clear and even. Neither scene shows any need of conservation treatment at present.

The Florentine artist Ventura di Moro specialized in small-scale portable tabernacles destined for private devotion, such as this one. In 1416, he enrolled in the Compagnia di San Luca and was running a bustling workshop by 1427.

The artistic identity of Ventura di Moro has been subject to scholarly debate throughout the 20th century. After Osvald Sirén (1909) erroneously attributed a group of works to the 14th century artist Ambrogio di Baldese, Raimon van Marle (1923-38) ascribed this group to the anonymous master “Pseudo- Ambrogio di Baldese.” Georg Pidelko (1935), Federico Zeri (1963), and Miklós Boskovits (1979) put forth significant additions to the oeuvre of Pseudo-Ambrogio.1 In 1971, Enzo Carli identified this anonymous artist as Ventura di Moro based on a signature on the edge of the blue cloak in his Madonna and Child of circa 1430 in the Pinacoteca Nazionale in Siena.2 Serena Padovani, however, argued in 1979 that Pseudo-Ambrogio can instead be identified as Lippo d’Andrea (1370/1371 - before 1451).3

Current scholarship holds that the group of paintings ascribed to the "Pseudo-Ambrogio di Baldese" can be divided between these two personalities: the early group to Lippo d’Andrea, a Florentine painter during the Late Gothic age and a contemporary of Bicci di Lorenzo and Lorenzo Monaco; the later group to Ventura di Moro, a younger artist who adapted the humanist advancements of the Renaissance, favoring a more individualized representation of figures.

We are grateful to Andrea De Marchi for endorsing the attribution to Ventura di Moro on the basis of photographs. He dates the painting to the artist's earlier years and compares it to his triptych in the Museo Civico e Diocesano d'Arte Sacra, Colle di Val d'Elsa.4

A note on the Provenance:

The painting was with Charles Henry Coster (1897 - 1977), the famous jurist from New York who graduated from Columbia Law School in 1923 and moved at an early age to Florence. There, he married Vincenza Giuliani and inherited her family's villa in Costa Scarpuccia. Mr. Coster was an avid collector of Italian paintings and sculptures and received advice from the famous art historian Bernard Berenson as witnessed through extensive letter exchanges.