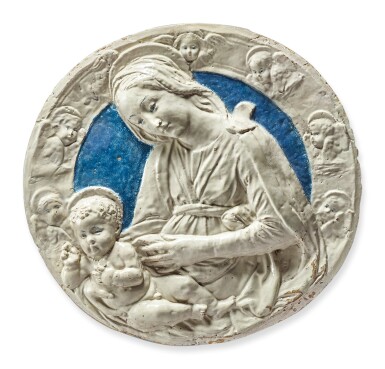 This lot is sold with a Thermoluminescence report from Oxford Authentication Ltd., stating that the sample taken (No. N119p93) was last fired between 400 and 600 years ago.

There are 2 repaired breaks to the right of the Virgin: One along her side and through the wing of the putto and one through her shoulder up through the border. They are barely visible with the naked eye and are extremely stable ( and are likely to be original firing cracks that were repaired by the workshop after firing). There are general surface abrasions and chipping throughout with minor restorations to some chips. Some porosity and bubbles from firing.

This lot is sold with a Thermoluminescence report from Oxford Authentication Ltd., stating that the sample taken (No. N119p93) was last fired between 400 and 600 years ago.

This roundel typifies the influence and collaboration between artists in late Quattrocento Florence. Benedetto da Maiano created this composition, an adaptation of Verrocchio's model of the "Madonna di Piazza" on the altar in the chapel of the sacrament in the Cathedral of San Zeno, Pistoia, in around 1485. Benedetto Buglioni was well-known for his faithful and expressive adaptations of works by Desiderio da Settignano, Antonio Rossellino and Benedetto da Maiano which he translated into glazed terracotta.

Buglioni's close relationship with Benedetto was not only demonstrated by his works but also was clearly documented in his workshop inventory, drawn up upon the sculptor's death in 1497, which refers precisely to how Buglioni had appropriated some of the compositions of his more famous colleague, with his blessing.

A very similar roundel of the Madonna and Child with angels, after Benedetto (with an associated wreath of fruit and flowers), was in the Thyssen-Bornemisza Collection (cat. no. 14, op. cit.) dated circa 1525, and derives from a model, of which casts in stucco exist in the Museo Nazionale del Bargello, Florence and the Isabella Stewart Gardner Museum, Boston. While some of these derivatives have been ascribed to Giovanni della Robbia, scholars have more recently given the present piece to Benedetto.