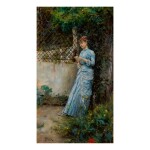 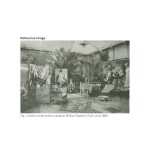 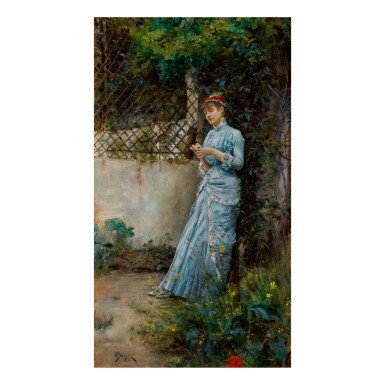 Private Collection, Waterford, Connecticut (gifted from the above)

An American by birth known throughout his artistic and social circles as the “Parisian from Philadelphia,” Julius LeBlanc Stewart moved to Paris in 1865 and went on to establish a career as a society painter best known for capturing the fashions and everyday pleasures of Belle Époque Paris. He had an art-centric upbringing because of his father, William Hood Stewart, a collector of contemporary paintings who engaged with the most important artists in Paris during weekly gatherings at his home. Thanks to the patronage of Parisian socialites and other well-to-do American expatriates such as the millionaire James Gordon Bennett, Jr., owner of The New York Herald, and Anthony Drexel, head of the prestigious banking firm Drexel, Harjes & Co., Julius Stewart experienced great success and a fruitful career once he became an artist in his own right with his colorful compositions that featured characters from his adventurous social life.

Far Away Thoughts provides a glimpse into Stewart’s early oeuvre. The present lot was painted in 1880, two years after Stewart’s debut at the Salon des Artistes Français at the age of twenty-three. Stewart spent formative years in the atelier of French titan Jean-Léon Gérôme in the early 1870s before studying with the Spanish painter Raimundo de Madrazo y Garreta, from whom he must have learned about the meticulous depiction of jewelry, flowers, fabrics and drapery. Madrazo’s influence can be found here in the brilliant blue dress the model wears. By the early 1880s, Stewart began incorporating the influences of artists such as Jean Béraud, Giovanni Boldini and Alfred Stevens, who earned fame for their quotidian scenes of Paris and its fashions. It was also in the early 1880s that Stewart finished building the stylish studio he shared with his brother at 36 Rue Copernic (fig. 1). The studio was essentially a conservatory complete with Oriental screens, sculptures, a marble fountain and a glass roof to let in the light, allowing the artist to paint figures “out of doors” without braving the elements. The studio featured one wall with lattice and vines, among other lush greenery, interestingly similar to the background of the present lot, further suggesting the artist’s interest in the effects of light and natural settings in his paintings of Belle Époque life.