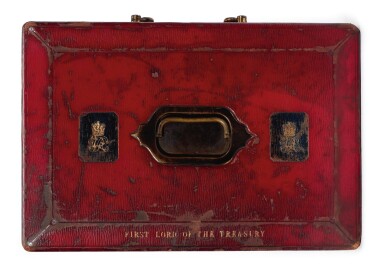 AN EXCEPTIONALLY RARE VICTORIAN PRIME MINISTER'S DESPATCH BOX. Despatch boxes, in their traditional red, are used for the secure transport of confidential government information (today's "Secret" or higher classification). Victorian despatch boxes are rare and collectible, but this is an exceptional piece as it was commissioned for the use of the Prime Minister. As would be expected, the user is given his formal title of First Lord of the Treasury ("Prime Minister", originally an informal term for the head of government, was first used in a royal warrant as recently as 1905). The box has a top handle for ease of opening, but also a side handle to carry it between Parliament and Downing Street. The side lock could hold paper slips, and the high-quality lock is on the base so the box cannot be carried unlocked.

The box can be dated with some certainty to the first third of the Victorian period, under the premierships of Peel, Lord John Russell, the Earl of Derby or the Earl of Aberdeen. Given the high quality of the workmanship the box is likely to have stayed in use for several decades, although it will not have had the longevity of the Chancellor of the Exchequer's despatch box (also manufactured by Wickwar of Poland Street), which was commissioned for Gladstone and remained in use for some 150 years. The presence of distinctive inset black lozenges with the royal cipher date the box to between 1841 and 1854. The disappearance of these lozenges after that year is almost certainly a result of the death of a master craftsman: Wickwar brothers relied on highly skilled craftsmen based in workshops along Poland Street, which was at the epicentre of the notorious 1854 Soho cholera epidemic.

Sotheby’s is grateful to Barrow, Hepburn & Gale for their advice in the cataloguing of this lot.

This box was presumably retired due to age and wear, and was kept by the manufacturer Barrow, Hepburn & Gale, who still make despatch boxes for the British Government. It was presented to Donald Anderson in 1980 for 30 years' service. Anderson was a master craftsman who worked extensively on red boxes, including repairing the famous Treasury Box used for the Budget.