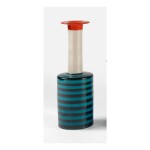 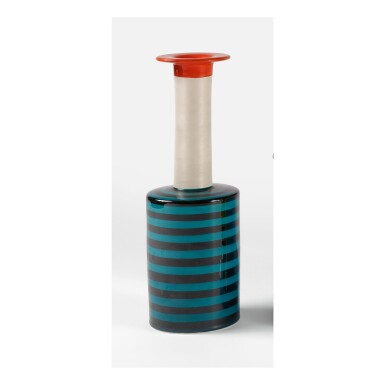 number 8 from an edition of 20

Overall in excellent condition. This reissued example of the original 1957 model presents with with very light scuffing throughout the surface consistent with age and gentle use. This lot has been examined under UV light and does not show any evidence of prior restoration.

Born into a collecting family with an illustrious presence in the arts, Ryan Brant was raised in an environment of immense creativity and aesthetic stimulation. The Collection of Ryan Brant, carefully assembled, provides perspective for collectors to experience the creative environment in which he lived.

Ryan’s impact and influence on the present generation’s adaptability to technological innovations and interactive aesthetics is unsurpassed and speaks volumes to Ryan’s understanding of the visual experience. Ever a forward thinker, Ryan founded Take-Two Interactive, a power-house in the video-game industry, which radicalized our perception of gaming in the 1990’s and through today. Take-Two Interactive, and its subsequent acquisitions, developed some of the worlds most recognized and esteemed video games such as the Grand Theft Auto empire and more recently Red Dead Redemption. The nascent years of Ryan’s collecting ran parallel with his budding career. Ahead of the curve, Ryan sought out works by pioneers of digital-photography such as Andreas Gursky and Thomas Struth amongst many others. While although Ryan left the company in 2007 his tastes were clearly sculpted through the eyes of a video-game designer with a knack for colorful character driven compositions and post-pop imagery. Keeping up with a changing market Ryan’s focus shifted and he began collecting artists and designers works in depth and with a discerning eye for quality. This earnestness made way for meaningful relationships which is immediately recognized by the intimacy and continuity throughout the collection. An early collector and advocate for KAWS and avant-garde designers, the collection is not only refreshing and young, but one of depth and knowledge. An arrangement of Sosstass’s atop a Campana credenza, or a wall of KAWS across from a Zaha Hadid table exude a fun, vibrant atmosphere which offers a glimpse into the way Ryan viewed the world.

Representing some of the most innovative and celebrated artists and designers of the twentieth century, including KAWS, Campana, Sottsass, Zaha Hadid and Wendell Castle, the Collection of Ryan Brant illustrates the capacity for human creativity and the importance of playfulness. This tenacious endeavor, and the present collection, is a tribute to a man who brought these works together.