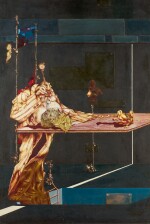 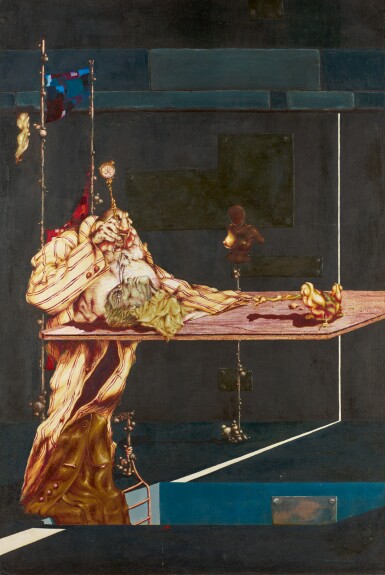 Born in Punjab in 1953, Ranbir Singh Kaleka studied painting at Chandigarh University before receiving the Charles Wallace Scholarship, which enabled him to complete his M.A. in painting at Royal College of Art, London. Throughout his career, Kaleka has experimented with different media and often combines both painting and video art in his installations. Kaleka is featured in many prominent museum collections. His first solo exhibition was at Art Today Gallery in New Delhi in 1995. He received the National Award from the Lalit Kala Akademi New Delhi in 1979 as well as the Sanskriti Award, New Delhi in 1986. His work was showcased at the Kochi-Muziris Biennale in December 2012.

"Critic's Dilemma was painted in response to the fat cat phenomenon. The suited ghoulish biggie with a small head is all jowl and belly. Gorging on the hapless victim, he supports his ever spreading insatiable stomach on the table. Below him is a bottomless pit, signifying his appetite or his corrupt deeds. Metal plates screwed to the walls may secure his horde of wealth. There is ambiguity as to the meaning of the diseased figure sitting on its haunches on the table. Does it represent the dispossessed or an accursed accomplice? In the tradition of Vanitas paintings, there are symbols of death, time, lust and gold as wealth. The title, Critic's Dilemma, alludes to the unease of criticising a potentate as well to the reading of an artwork." (Correspondence with the artist, April 2019)

This composition evokes the dream-like works created by Surrealist artists, in particular, Salvador Dalí. Time and place are superseded by Kaleka’s desire to focus on the scene itself. 'Morphing and reproducing exponentially, the image, as we now know it, is perennially beleaguered. To outwit this condition is a challenge, but Ranbir Kaleka is happy to pick up the gauntlet. […] Before merging painting and video to create a spectral cinematic interface, for two decades Kaleka honed a painterly practice of considerable theatricality. His penchant for surreal juxtapositions is evident. […] In these tableaux, Kaleka mined motifs of his childhood in Patiala, Punjab, such as cockerels, horses and wrestlers, as well as his fascination for outré inventions and his absorption with light, which he deftly controlled through his use of pigment. Everything Kaleka privileged in his paintings continues to exert gravity in his multimedia work.' (G. Dang, ‘Ranbir Kaleka’ , Frieze Magazine review, Issue 138, April 2011 - https://frieze.com/article/ranbir-kaleka)