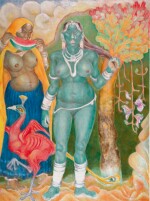 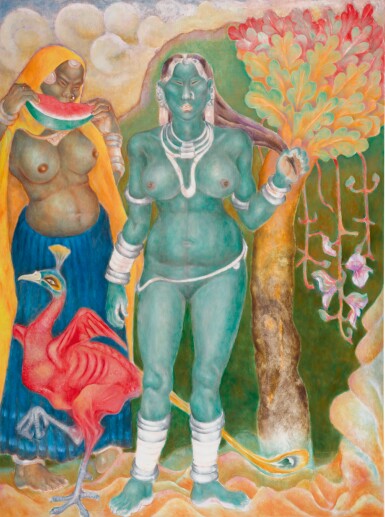 A. RAMACHANDRAN | Yayati - I

A. RAMACHANDRAN | Yayati - I

Achutan Ramachandran Nair is one of India's most illustrious senior artists whose career spans more than five decades. Known of his narrative paintings, the visual drama of Ramachandran's large-scale works is derived in part from his academic background in traditional Indian art history and epic literature. In 1957, the artist received his MA in Malayalam literature; then he pursued a diploma in Fine Arts at Visva Bharati University at Santiniketan studying under the tutelage of masters like Benode Behari Mukherjee and Ram Kinkar Baij. In 1964, he completed his doctoral thesis on Keralan mural painting and finally dedicated himself to art history instruction as Professor Emeritus at Jamia Millia Islamia University in Delhi until his retirement in 1992. In 1991, he was appointed honorary chairman of Kerala Lalit Kala Akademi, and in 2005 he became Professor Emeritus at Jamia Millia Islamia University. Ramachandran’s early works of the 1960s dwell on the angst of urban life. In the 1980s, his works underwent a dramatic transformation and the darker expressionistic works gave way to more colourful works in search of beauty, inspired by his knowledge of passion of Kerala temples and mythology.

It was the Yayati Series which heralded this breakthrough. The current lot is Ramachandran’s first version of Yayati which reached an apogee in his monumental mural of 1984 consisting of 60 feet of painted narrative canvases and 13 sculptures, executed between 1984-86. “The story of Yayati from Mahabharata fascinated me. I was intrigued by Yayati’s never ending desire for physical pleasure and that he, at the [tail]-end of his life, when he was a crippled old man, could ask his sons for their youth in exchange of his kingdom. Man’s quest for luxury and comfort today, aided by uber science and technology, is somewhat like Yayati’s weakness for pleasure, in my opinion. I struggled to formulate suitable communicative images for Yayati. In the process, I came across the nomadic tribe of Rajasthan who are metal smiths and found them to be ideal models. The heavy frontal nude like Didarganj Yakshi, the bare breasted woman devouring a water melon and the de-plumed peacock symbolising Yayati, all together have a great potential for erotic evocation. This work done in 1983, was my first attempt to do Yayati.” (Correspondence with the artist, April 2019)

Yayati is a multi-layered theme – “of sensuality, decay and death” (Artist statement, 1980s, Courtesy Barbier Family Archives) Here, we see the voluptuous women juxtaposed with the almost emaciated peacock, amidst a backdrop of a garden teaming with vegetation. “I like juxtaposition of contradictory pictorial imageries. Because they create layers of suggestions like ripples in the water. I take elements from different sources, viz., nature and traditional Indian art, like miniatures and wall paintings, in search of my contradictory imageries.” (ibid.) The Yayati mural and series, when initially executed caused a furor amongst those who found it to be too sensual and fantastical. However, today it is the hallmark of the artist’s career.