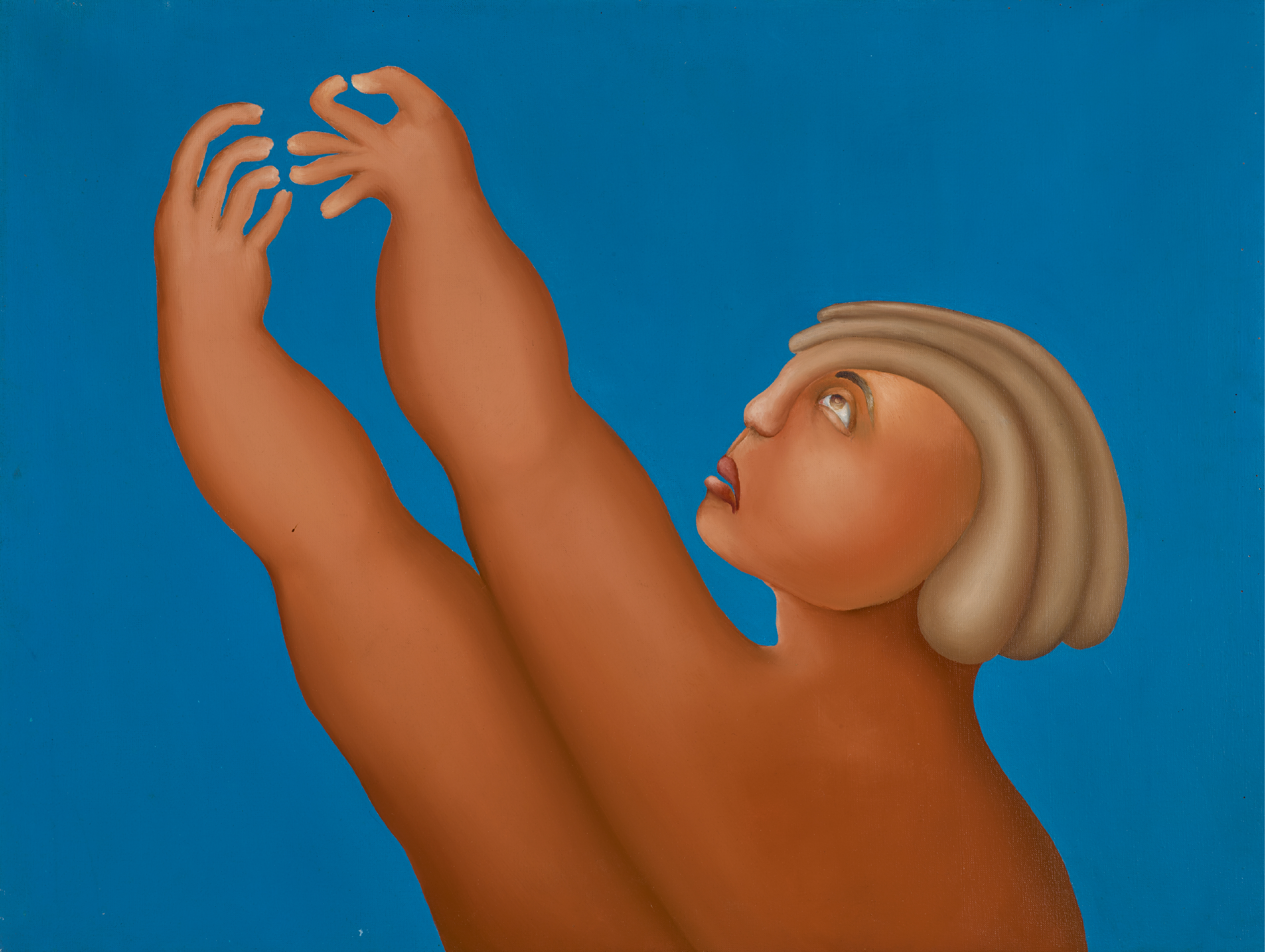 Signed in Devanagari and dated '83' on reverse

Acquired directly from the artist at his studio in New Delhi, 14 January 1983

Manjit Bawa's luminous paintings are an exploration of form and space that draws the viewer into an intimate experience with the artist's imaginary world. With an emphasis on colouration, his blending and gradation of colours on his subjects has an element of post-Renaissance painting, yet flat backgrounds and dismissal of perspectival space prevails. Bawa has attributed his bright and flat colour fields to his work as a silkscreen painter at the London School of Printing, Essex, United Kingdom, between 1967-71. 'For a period, he earned his living in a silk-screening studio and later he taught this technique. But, his attachment was to painting. His mastery of serigraphy instilled an appreciation of the power of luminous pure colour and sharply delineated forms. Nonetheless, it was not until 1973 that he began to use flat colour in his painting.' (G. Sen, Image and Imagination: Five Contemporary Artists in India, Ahmedabad, Mapin Publishing, 1996, p. 79)

This feature seems to render his forms weightless and his humans and animals appear like magic in the foreground. '[His] protagonists do not emerge from an imagined background or prop themselves against the wide horizon of an opening world; rather, they manifest themselves suddenly, like apparitions, in a field that could well be an aura. This is why Bawa's figures, modelled in a surreal manner as they are, can safely be placed in a tradition of innovation and experiment that goes back through the prints and paintings of Kalighat and the Company School to the miniatures of the Mughal and Rajput ateliers.' (R. Hoskote, Modern Miniatures, Recent Paintings, Bose Pacia Gallery Exhibition catalogue, 2000, unpaginated)

In the present lot, Bawa portrays Hanuman, the monkey god. Often inspired by icons and myths, his subjects represent the dual polarities of the human and animal world; although they share the same environment they occupy different universes. This work is reminiscent of the story of when Hanuman wanted the sun. Hanuman was the son of Vayu, the god of the wind, and Anjana, a celestial nymph. As a child, Hanuman displayed great powers and prowess. One morning, he saw the sun rising and thought it was a great yellow ball. He decided to get hold of it so that he could play with it. Indra, the king of gods, saw Hanuman leap into the sky and wanted to stop him. He threw his weapon, the Vajra/thunderbolt at the child. It appears as if Bawa is capturing the moment, when he leaps towards the sun. The sun is of course missing here. Bawa’s focus is not with the narrative but with the spatial and chromatic relationship of the canvas. His use of background space as a unified whole, combined with very Indian colours such as cerulean blue, as seen in this work, is reminiscent of Pahari miniatures, yet Bawa imbues a sense of ethereality or other-worldliness in his works that truly makes his artistic style unique.