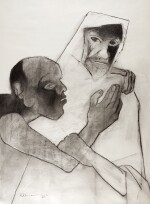 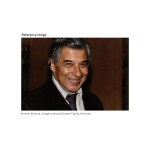 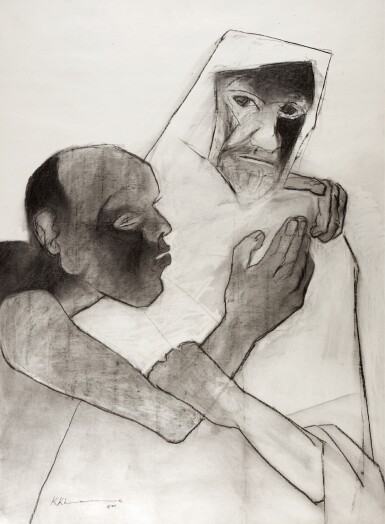 "I left the military men at their games and turned my attention to a nobler and more difficult game, that of love and its exponent Jesus Christ. This was not a programmed approach. I have been fascinated by Christ’s life for a long time and painted my first picture some thirty-five years ago. Since then I have painted many more and a few years ago I painted a series of fifteen, beginning with the Last Supper and ending with Emmaus. Take the Last Supper. There were subtle nuances in conversation. Jesus knew who the betrayer was and when asked by one of his followers, he gave him sufficient indication without embarrassing Judas. He was playing the game of love till the very end. His abhorrence of violence came through beautifully when he admonished Peter saying, 'Those who live by the sword shall perish by the sword.' All this is fascinating subject matter and has been for centuries." (K. Khanna quoted in 'Looking beyond his canvas: Krishen Khanna', The India Magazine, Volume 4, Number 10, September 1984, p. 21)

Within his work, Krishen Khanna uses biblical references within an Indian context, their religious symbolism becoming a social concern. Throughout his career Khanna has returned to the theme of persecution and suffering of the everyday man. Norbert Lynton notes that in this series, Khanna’s figures ‘are presented starkly, in an almost monochrome composition, the assailant clad in white and standing over a brown-skinned Christ. […] Khanna has witnessed or known of, over the decades, many fellow humans suffering at the hands of officials acting on the orders of superior powers.’ (N. Lynton, ‘The Betrayal and the Flagellation’, Krishen Khanna: Images in My Time, Mapin Publishing, Ahmedabad, 2007, p. 20)

The physique of the subjects with their sun darkened bodies and wizened callous faces are those of the labourers found in the Nizamuddin District of Delhi. This moving and emotional drawing from 1980, executed in charcoal is a sublime example of Khanna's mastery of light and tonality.