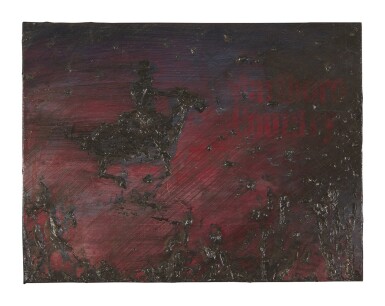 titled and dated 1984 on the reverse

This work is in very good condition overall. There are tonal and textural shifts due to the artists working method and chosen media. There is a fine layer of surface soiling, visible upon very close inspection. There are a few scattered losses in the lower right corner, potentially inherent to the artist's working method. Under ultraviolet light, there is no evidence of restoration. Framed under Optium Museum Tru Vue Invisible Acrylic.

An American-Canadian graffiti artist, Richard Hambleton initially attracted public attention by painting faux crime-scene outlines of bodies on pavements. In the early 1980s, Hambleton painted buildings in the Lower East Side of New York City alongside Jean-Michel Basquiat and Keith Haring, during which time the artist also began to portray iterations of his highly recognized Shadowman figures onto found objects and canvases. According to the artist, “they could represent watchmen or danger or the shadows of a human body after a nuclear holocaust or even my own shadow”.

“His early Shadowman period led to shadow images of bucking horses and riders on walls and canvases. By 1984, he had turned to the Marlboro Man, the cowboy figure whose macho image promoted cigarettes for decades. Mr. Hambleton, who smoked, toyed with the image, painting shadow figures over it, sometimes mixing tobacco with black paint for what he called a ‘black lung’ effect”