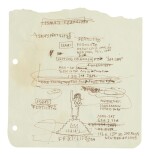 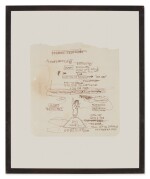 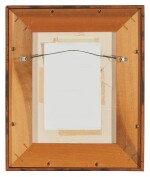 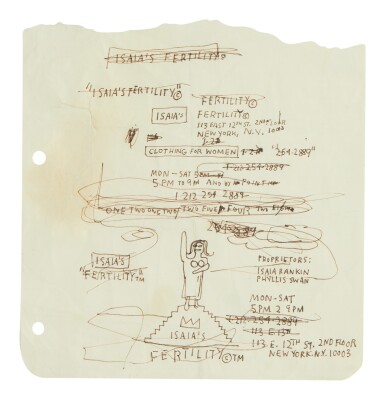 New York/New Wave: From Walls to Canvas Property from the Collection of Robert Page

New York/New Wave: From Walls to Canvas Property from the Collection of Robert Page

Property from the Collection of Robert Page

This work is in good condition overall. The sheet is hinged along the edges of the reverse to the backing board. There are minor undulations and creases throughout. The upper edge is irregular from having been torn from a notebook. The is minor aging to the sheet and fading to the ink. There is evidence of a 2 inch tear that has been stabilized in the upper left quadrant. There are areas of oxidation surrounding the tear and at the left of the lower figure. There is a pinpoint accretion at the lower right corner, visible upon close inspection. Framed under Plexiglas.

Collection of Isaia Rankin (acquired directly from the artist)

Collection of Robert Page (acquired from the above in 1989)

Born to a Haitian father and a Puerto Rican mother, and raised in culturally-diverse Brooklyn in the 1960s and 70s, Basquiat was painfully aware of the shadow that colonialism had cast over his personal heritage and the state of African-American people and culture within the country. In spite of his own meteoric rise to fame and fortune in the 1980s, Basquiat encountered a great deal of discrimination during his lifetime. As Keith Haring once recalled, “Being black and a kid and having dreadlocks, he couldn't even get a taxi. But he could spend $10,000 in his pocket[1]." Whilst operating in an art world whose protagonists were almost exclusively white, he made paintings filled with explicit textual and pictoral references to European colonization, the slave trade and the commodities reliant upon it, and homage to African-American figures (such as Jesse Owens, Cassius Clay, Charlie Parker and Miles Davis) that defied Western histories and its heroes.

The present work, Isaia’s Fertility¸ captures Isaia Rankin (who would come to be known by his first name), an African-American fashion designer whose career was taking off in the 1980s just as the AIDS epidemic that would too soon claim his life in 1989 began to sweep the country. Isaia was among those remembered (alongside Perry Ellis, Halston, Franco Moschino, and others) by the CFDA (Council of Fashion Designers of America) on the 28th annual World AIDS Day in 2016. Isaia was becoming known for his sleek looks that at his peak were retailing at Barneys and specialty stores such as Charivari and Fred Segal, and worked alongside several known figures that have since exploded as some of the best known fashion players in the industry. He appeared in Vogue alongside a young Marc Jacobs in 1986 and was photographed by Robert Mapplethorpe between 1981-83.

Isaia and Jean-Michel Basquiat met in the downtown scene early in their respective careers, soon developing a friendship and shared passion for the African-American creative movement in fashion and art. Isaia had asked Basquiat to create some artwork to advertise Fertility, his store in the East Village, and it was from this request that the present drawing was conceived and later gifted to Isaia. The promotional motive comes across via a repetition of the store name, copyright symbol, an address, phone number, and hours of operation, along with “Clothing For Women,” however it is turned on its head by Basquiat’s signature style – expressionistic crossing out of words, intermingling of text and drawing, and his signature crown below the central figure. While many interpretations have been made about the crown motif, most often it is recognized for its relation to kings and greatness – often in relationship to himself or others he admired.

Basquiat’s involvement with the fashion industry is well-documented: in the 1970s he developed a line of hand-painted clothing under the label Man-Made, and one of his first exhibitions, it is said, took place in the store of Patricia Field. The artist walked down the runway for Comme des Garçons in Rei Kawakubo’s Spring/Summer 1987 collection, and was well known to walk around in paint-stained Armani suits and Issey Miyake military jackets. Fashion it seems, might have been a way that Basquiat was able to personify his ambitions of greatness, or that of a king. In Keith Haring’s words, “he had to live up to being a young prodigy, which is a kind of false sainthood[2].”

Upon Isaia’s tragic death, one of Isaia’s mentees, Robert Page, inherited this work and piece of history, and has kept it in his personal collection ever since. On the 20th anniversary of Isaia’s death, Isaia’s story is being commemorated as the work appears at auction and in public realm for the first time.