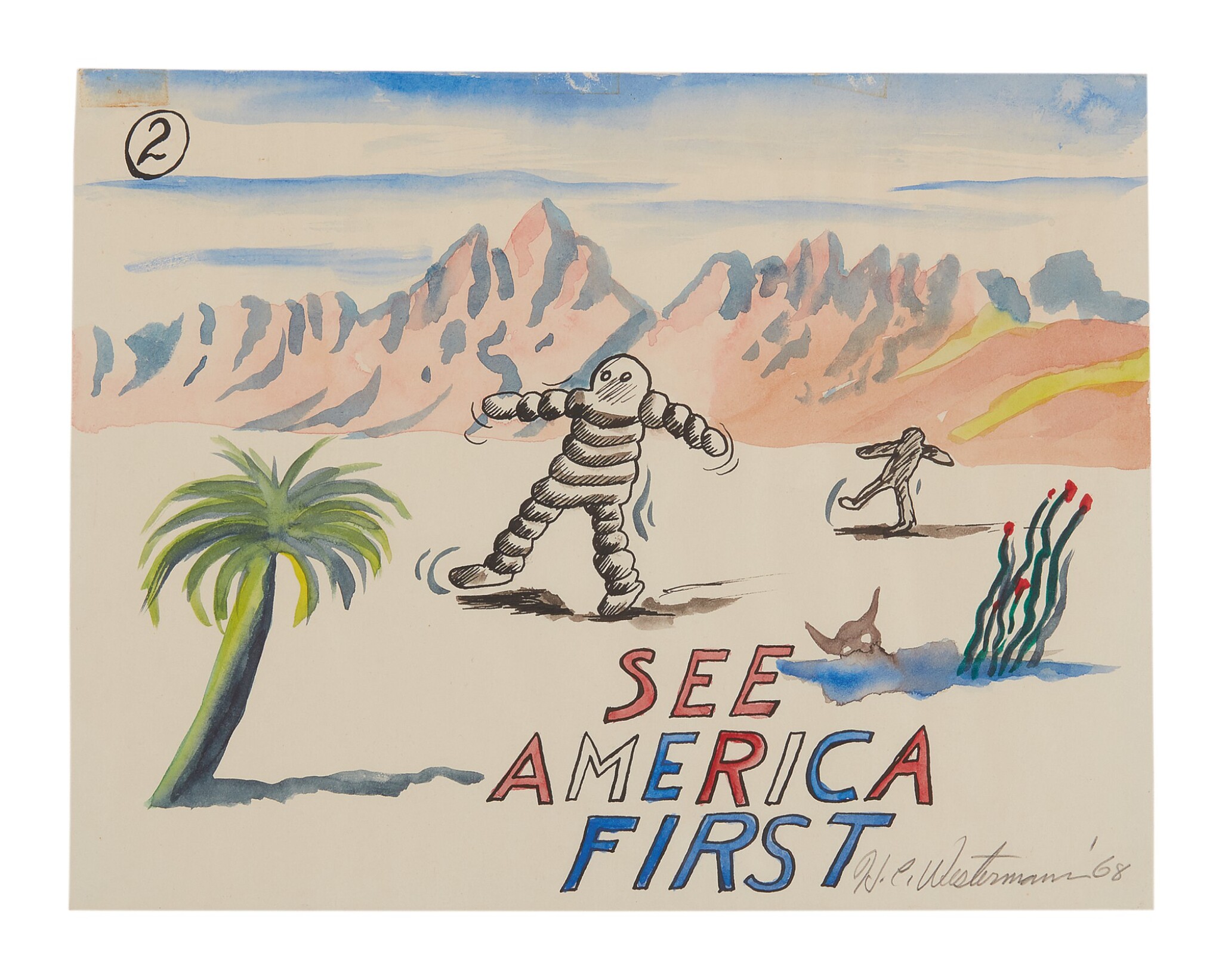 Acquired from the above by the present owner in October 1969

“H.C. Westermann is one of postwar art’s great misfits. Emphasis should immediately be placed on ‘postwar.’ For generations increasingly remote from the events, it is World War II, America’s last ‘good war,’ that is primarily at issue, though it is important to note that after serving in the Pacific during that global confrontation, Westermann signed up for a tour of duty in the Korean War, a murkier cause… This trajectory entailed Westermann’s increasing disillusionment with the use of moral righteousness and heroic virtue as alibis for carnage… Like Otto Dix, the German painter of social and physical decay, or Ivan Albright, the Chicago-based virtuoso of the macabre, both of whom saw action in World War I, Westermann emerged from his exposure to wholesale slaughter with no utopian dreams, but a few recurring nightmares.”

[Westermann’s] love of country was genuine and deep, and it was renewed by transcontinental car trips taken in the 1960s, when the ‘United’ States was on the brink of coming unstuck. Those migrations were documented in letter drawings and his See America First [drawings and] prints, whose principal motifs are not big-city sights but the empty spaces between – two-lane blacktop cutting through the desert past vintage signs, roadkill and roadside attractions, car wrecks and bleached bones, all of them metaphors of pioneer solitude in the age of V-8 engines. These scarred wastelands were also the nation’s blasted heartland, and if Westermann’s iconography was bleak, his rendering was vigorous and often gleefully obscene. His patriotism was for a place with room enough to get away from the air-conditioned nightmare of modernity. Far from treading the bitterly circular path cut by Thomas Hart Benton and the artistic America-firsters of the Depression, Westermann cut his own zigzag course across the landscape of American culture. To the extent that it resembles anyone else’s, it is Jack Kerouac’s minus Kerouac’s “O Wow” epiphanies and leavened by a wild sense of human akin to that of another Beat icon, Lord Buckley.”