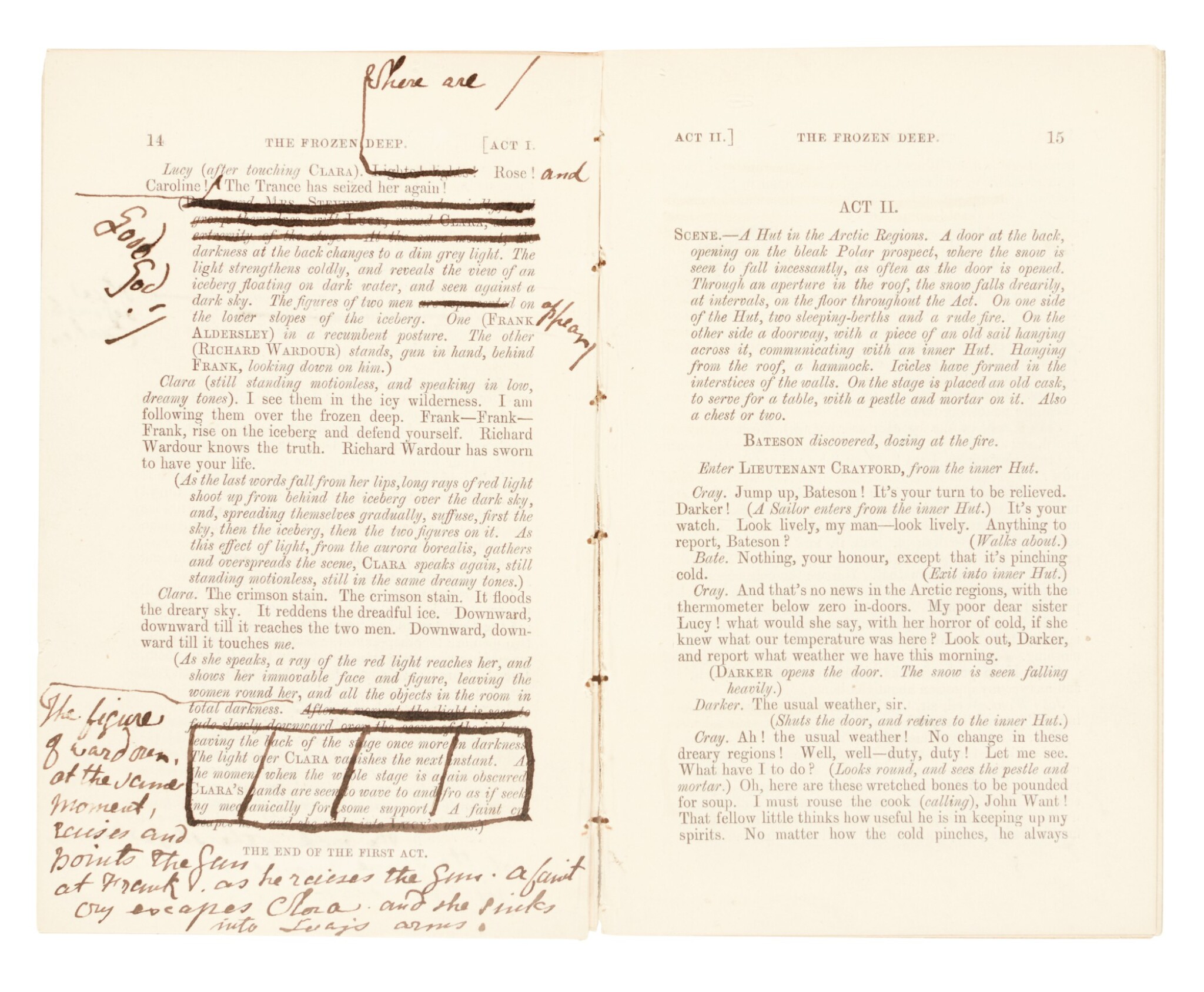 THE VERY RARE FIRST EDITION, WITH COLLINS'S CORRECTIONS. The author's changes mostly aim to increase the pace of the dialogue, although a sizeable number make changes - some of them substantial - to the staging. The most extensive change comes at the end of Act I, where new stage directions describe Clara's vision of Wardour aiming his gun at his enemy, Frank Aldersley ("...as he raises the gun, a faint cry escapes Clara and she sinks into Lucy's arms...", p.14).

The Frozen Deep, an arctic melodrama written in the aftermath of the Franklin expedition, was written by Collins in 1856 and first performed at Tavistock House on Twelfth Night in January 1857 to celebrate Dickens' son Charley's twentieth birthday. Dickens played the starring role of the sacrificial hero Richard Wardour, acting alongside Georgina, Mamie and Kate. "As usual with a play which passed into rehearsal under Dickens' auspices it came out improved. This was the case with 'The Frozen Deep.' The changes were so numerous that the drama almost may be ascribed to Dickens." (Eckel, p.166). On 8 June the same year his friend the playwright Douglas Jerrold died, and Dickens decided to revive The Frozen Deep to stage performances in aid of a fund to support Jerrold's widow and children. He was also aware that Queen Victoria was keen to see the play. Performances subsequently took place at the Gallery of Illustration in Regent Street, with the Queen attending on 4 July with a large party. In July he took the play to the Manchester Free Trade Hall, with the actress Mrs Ternan and her two daughters Maria and Ellen ("Nelly") taking the roles of the Dickens children (Dickens felt professional actresses were required to project properly in the larger space). The subsequent rehearsals and performances for The Frozen Deep and the farce Uncle John, with Dickens playing opposite Maria in one and Nelly in the other, all to great public acclaim, created the basis for Dickens' newfound attachment to Nelly, which resulted in profound changes to the author's life: he was to separate from his wife Catherine, ruptures occured in longstanding friendships and with publishers, Household Words ceased publication, and he parted company with his best illustrator, Hablot K. Browne ("Phiz").

The printed edition of The Frozen Deep did not appear until nine years after its initial performance, when the play was unsuccessfully revived on stage. The present copy may be the one Collins worked on around the time of the revival. Eckel is probably referring to the present copy ("a unique and interesting copy, having the autograph of Wilkie Collins on the title...throughout the text there were marginal changes in the same handwriting") when he speaks of a copy sold at Anderson's in New York in 1911. If so, he records that "it was said that the copy belonged to Mamie Dickens, daughter of the novelist". Mamie, who was the closest to her father of all his children and who went on to be the first editor of his letters, acted alongside him in the first performances of the play at Tavistock House. Collins subsequently rewrote the play in the form of a novella, and used it very successfully (mirroring the performances of Dickens), for his readings in Britain and America in the 1870s.

We understand that the author may have annotated copies of this play for other members of the cast.