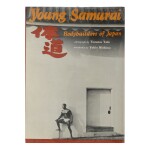 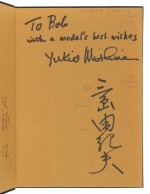 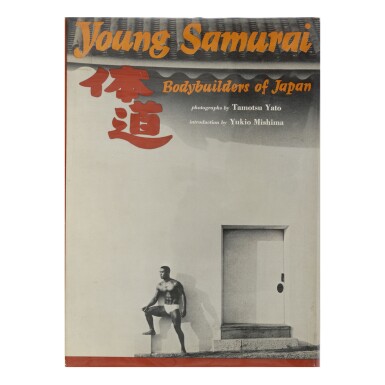 Together, 3 early editions of this title, each 4to (10 1/4 x 7 1/2 in.; 261 x 190 mm). Text printed on tan paper, numerous photographic illustrations by Tamotsu Yato, introduction by Mishima. Two-toned black and tan cloth, spines gilt-lettered, Japanese calligraphy stamped in black on upper covers; minimal wear. Original dust-jackets with photograph of Mishima; some wear and paper loss on some spine ends.

"[S]urely the first collection of photographs of Japanese bodybuilders ever to be published" (Yukio Mishima).

For this celebrated collection of bodybuilding photographs, novelist Yukio Mishima not only contributed the introduction, but also modeled for some of the most memorable photographs. "…for the past ten years and more there has been a group of young men in Japan who, privately, sweating silently, and with barbells for companions, have developed sturdy, well-proportioned physiques such as earlier Japanese never imagined even in dreams. The present book is eloquent testimony to their success. As the well-known essayist Michio Takeyama has written, it is amazing how faithfully the bodies of Japanese youths conform to the aesthetic standards of ancient Greece, and I am reminded of Lafcadio Hearn's having called the Japanese 'the Greeks of the Orient.'"