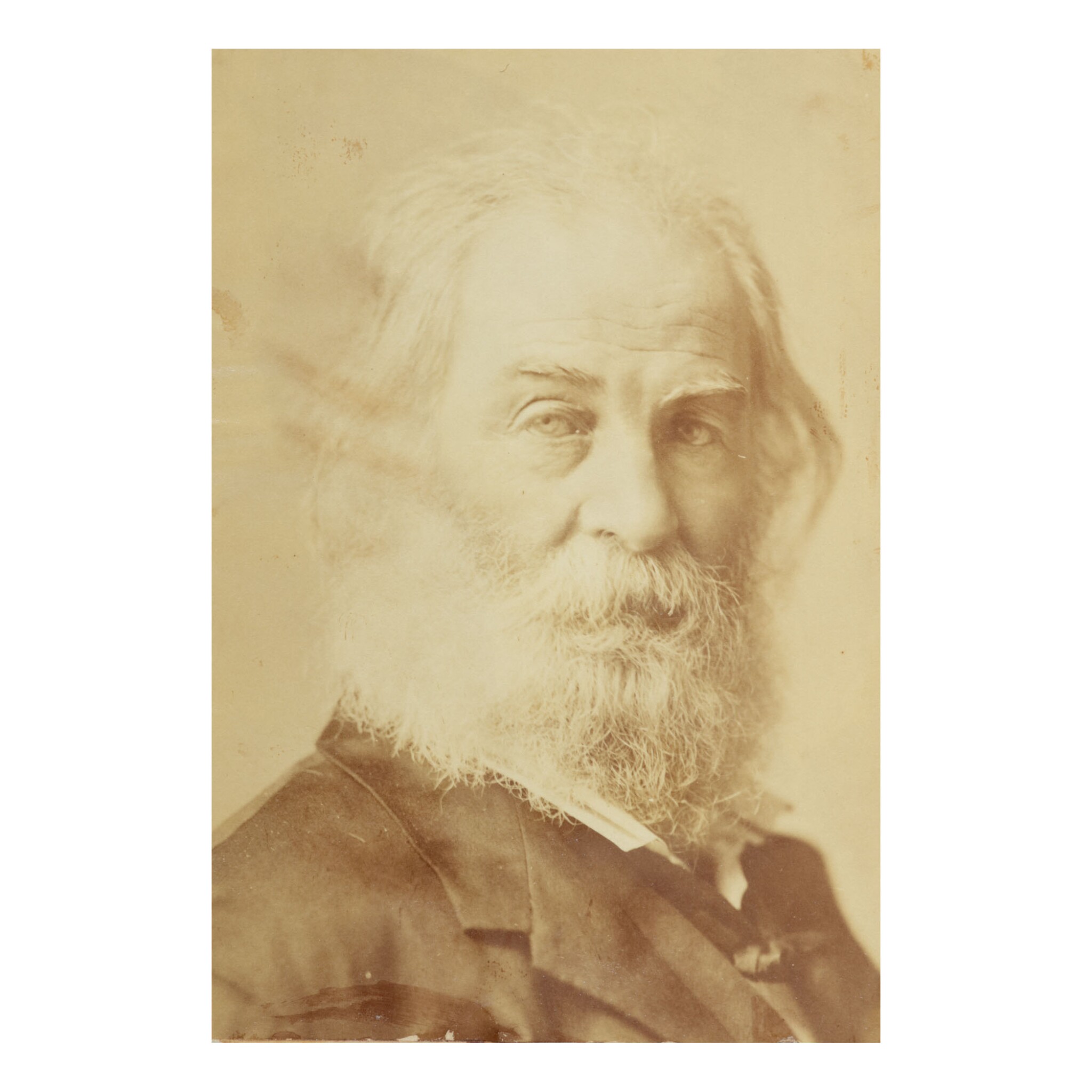 Presentation copy, inscribed by Whitman to his "Calamus Lover," Peter Doyle on the front flyleaf: "Peter G. Doyle, from Walt Whitman, Washington, April 29, 1868." Whitman probably met Peter Doyle in Washington, D.C., sometime in early 1865 while Doyle was a streetcar conductor, and—despite a number of dissimilarities: Whitman was 45, an accomplished literary figure, and an ardent Unionist, while Doyle was 21, virtually illiterate, and a Confederate veteran—they remained friends, lovers, and correspondents for many years. Dr. R. M. Bucke, one of Whitman's early adherents, edited and published their letters in 1897 as Calamus: A Series of Letters Written During the Years 1868–1880 by Walt Whitman to a Young Friend (Peter Doyle).

In an interview with Bucke published in Calamus, Doyle fondly recalled his first meeting with the poet: "How different Walt was then in Washington from the Walt you knew in later years! You would not believe it. He was an athlete—great, great. I knew him to do wonderful lifting, running, walking. You ask where I first met him? It is a curious story. We felt to each other at once. I was a conductor. The night was very stormy,—he had been over to see Burroughs before he came down to take the car—the storm was awful. Walt had his blanket—it was thrown round his shoulders—he seemed like an old sea-captain. He was the only passenger, it was a lonely night, so I thought I would go in and talk with him. Something in me made me do it and something in him drew me that way. He used to say there was something in me had the same effect on him. Anyway, I went into the car. We were familiar at once—I put my hand on his knee—we understood. He did not get out at the end of the trip—in fact went all the way back with me. I think the year of this was 1866. From that time on we were the biggest sort of friends."

Whitman and Doyle were near-constant companions for seven years. Martin Murray has written that the "effects of [Whitman's] friendship with Doyle may also be seen in the 1867 edition of Whitman's Leaves of Grass"—that is, the edition from which the present presentation copy derives: "Whitman added several new poems, but more significantly, deleted three poems that had been in the 'Calamus' section. As Florence Freedman noted in her biography of Whitman's knight-errant, William Douglas O'Connor [William Douglas O'Connor, Walt Whitman's Chosen Knight (Ohio University Press, 1985)], Whitman eliminated those poems that 'expressed self-doubt and despair,' but 'kept those which expressed love and longing unaccompanied by despair.' … It seems likely … that Walt's new-found confidence in love was, in large measure, a result of his satisfying friendship with Pete. The excisions can be interpreted as Whitman putting the unhappiness of his first 'Calamus' love relationship with Fred Vaughan behind him, as he embarked on this new love adventure."

Charles Shively finds in another poignant reminiscence captured by Bucke's interview an echo of the final poem in the Calamus cycle, "Full of Life Now": "I, that was visible, am become invisible, … / Fancying how happy you were, if I could be with you, and become your comrade; / Be it as if I were with you. (Be not too certain but I am now with you.)." Doyle's words were spoken after he had gone to the closet and retrieved an old raglan of Walt's: "I now and then put it on, lay down, think I am in the old times. Then he is with me again. It's the only thing I kept amongst many old things. When I get it on and stretch out on the old sofa I am very well contented. It is like Aladdin's lamp. I do not ever for a minute lose the old man. He is always near by."

This is the scarce first issue of the fourth edition, including first-edition sheets from the first editions of Drum-Taps, Sequel to Drum-Taps, and "Songs Before Parting," all with separate title-pages and pagination. An astonishing association copy and a vital relic of the greatest love of Whitman's life.