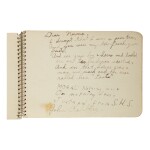 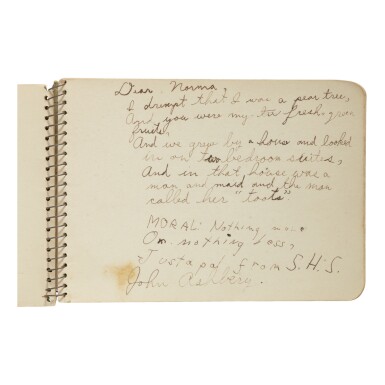 Two entries in the autograph book are definitely in Ashbery's hand and a few others may also be the work of the nine- and ten-year-old budding poet.' In an undated entry signed "John Ashbery," he writes, "Dear Norma, I dreampt that I was a pear tree, / And you were my fresh green fruits, / And we grew by a house and looked / in on two bedroom suites, / And in that house was a / man and maid and the man / called her 'toots.' // MORAL: Nothing more / Or nothing less, / Just a pal from S. H. S. / John Ashbery." Another entry signed "John L. Ashbery" is dated 15 January 1937. Other entries signed "Muriel" and "Lucille" may possibly be in Ashbery's hand