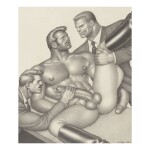 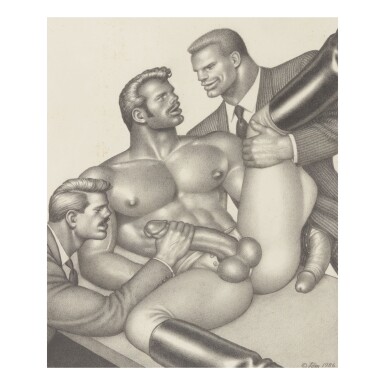 Casual Friday, 1986. This superb Tom of Finland drawing was used as the cover illustration for Oversexed Office, number 26 in the artist's popular Kake series of illustrated magazines. A copy of the magazine is included with the drawing.

Tom of Finland's drawings have reached a very wide audience since they were first published in America in 1947. With the relaxing of censorship in the 1970's, the artist's published drawings became more sexually explicit. Oversexed Office is a prime classic example of this final phase of Tom's career. Today his drawings can be found in the collection of many museums, including the Museum of Modern Art, the Art Institute of Chicago, Los Angeles Country Museum of Art, San Francisco Museum of Modern Art, and others. Writing in Artforum in 2014, Kevin Killian remarked that seeing Tom of Finland's original graphite drawings for his published work "produces a strong respect for his nimble, witty creation."