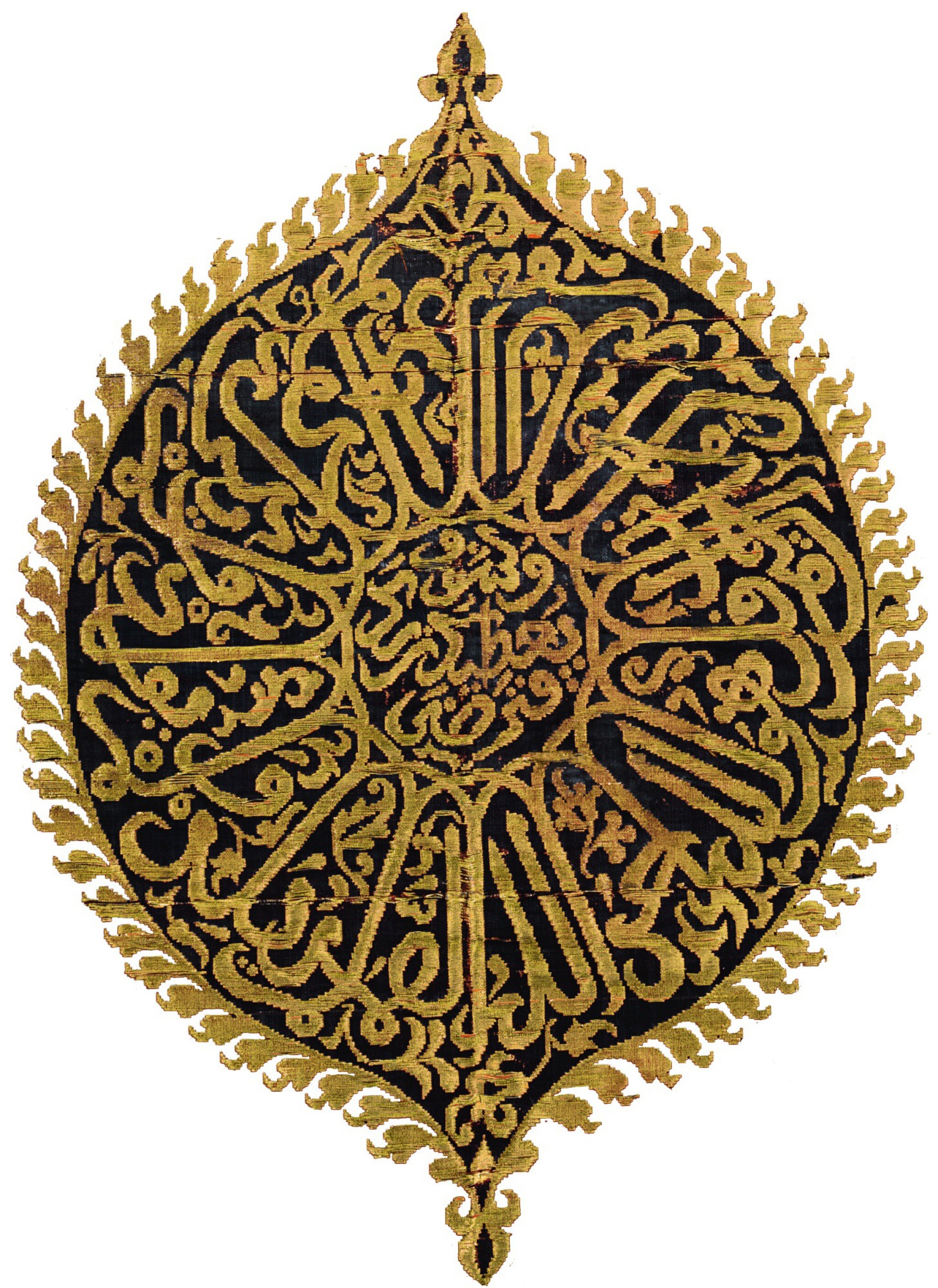 of rectangular form, the black cotton ground embroidered with gilt-metal threads, the design comprised of an arched inscription band with an inner ogee arch centred on a small calligraphic roundel with starburst surround and a larger leaf-shaped cartouche below enclosing a monumental radial inscription, the spandrels with crescent-form calligraphic cartouches, the interstices with leaf scrolls, flowerheads and further inscriptions, the tapered upper section with two broad inscription bands in oblong cusped cartouches, framed by a narrow scrolling border, modern backing

Some of the metal threads frayed, notably horizontally, with associated retouching and two tears, the upper section with a dark stain and a horizontal crease due to folding, further horizontal creasing in centre, on modern backing with velcro band to top for hanging, colours in centre remain strong and bright, as viewed.

In the corners of the second cartouche: 'God' and 'Muhammad'

In the two roundels in the corners of the main arch: The shahada.

In the centre of the large cartouche: Qur'an, surah al-Duha (XCIII), 5.

In the border around the central cartouche, the upper part: A couplet from al-Busiri's Qasida al-Burda.

In the leaf-shaped cartouches: Invocations to God.

This beautiful textile is a rare survival belonging to a small corpus of Maghribi textiles produced in North Africa, probably Morocco, for Mecca or with a connection to the Hajj, perhaps as early as the seventeenth century.

The reference to Idris in part of the inscription could be an allusion to Idris ibn Abdullah, or Idris I (reigned 789-791 AD), the great grandson of the second imam Hasan, son of 'Ali, and grandson of the Prophet Muhammad. Idris ibn Abdullah escaped the rule of the Abbasids in 786 AD and took refuge in North Africa where he established the rule of the Idrisid dynasty in present-day Morocco. This would confirm that the curtain is of Moroccan manufacture and that the person who commissioned it was consciously alluding to an illustrious predecessor who had a direct link to the family of The Prophet.

There are further clues to the function of the curtain. The tapered upper section and fabric dimensions are an exact match to a group of curtains made for Maqam Ibrahim at Mecca. Prior to 1940, when Maqam Ibrahim was rebuilt, the shrine had a distinctive sloping top and all curtains made to cover the structure reflected its truncated pyramidal form (see Ibraham Rafa'at, Marat al-Haramein, Part 1, Cairo, A.H. 1344, pl.53). Furthermore, the inclusion of surah al-Baqarah (II), verse 260, in the main arch, which refers to the Prophet Ibrahim, is typical of verses found on 'part one' or 'side one' curtains made for the four-sided shrine and provides further evidence that this textile was destined for Mecca (see Ibrahim Helmi, Kiswat al-ka'aba al-musharrafah wa funoun al-Hijjaj, Cairo, 1991). Other verses, such as qasida al-burda, are atypical.