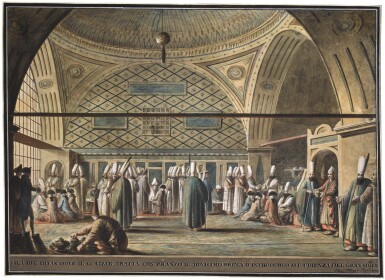 In good condition, laid down on card, some minor folds and minor losses to the paint, minor holes and minor areas of restoration, as viewed.

The Divan-i Hümayun, the Imperial Council, was the de facto cabinet of the Ottoman Empire for most of its history. Initially it consisted of an informal gathering of the senior ministers presided over by the Sultan in person but by the mid-fifteenth century the Council's composition and function became firmly regulated. The Grand Vizier, the Sultan's deputy as the head of government, assumed the role of chairing the Council, which comprised the other viziers, charged with military and political affairs, notably the two kadi-askers or military judges, the defterdars in charge of finances, the nişancı in charge of the palace scribal service, and later the Kapudan Pasha, the head of the Ottoman Navy, and occasionally the beylerbeyi of Rumelia and the Agha of the Janissaries.

The Imperial Council remained a crucial part of the Ottoman state until the mid-seventeenth century, after which it lost most of its power to the office of the Grand Vizier. With the Tanzimat reforms of the early nineteenth century, it was eventually succeeded by a Western-style cabinet government. In the present lot, the figure of the Sultan, listening to the discussions below, can be seen behind the grilled window. On either sides of the window are framed tughras, the imperial monograms of the Sultan. In the foreground is a servant preparing coffee. In the background there are members of a European commission, possible French diplomats, discussing stately matters with Ottoman high ranking bureaucrats.

Luigi Mayer worked for the British ambassador in Istanbul, Sir Robert Ainslie, from roughly 1776 until 1792. Mayer appears to have received his artistic training in Rome, often signing his work Luigi Mayer Romano, and was reputed to have been a pupil of Giovanni Battista Piranesi. For comparable Istanbul scenes by Luigi Mayer from the British Museum and the Ömer Koç Collection, please see Briony Llewellyn’s article ‘The Empire Unvarnished’ (Cornucopia, Issue 53, 2015, pp.48, 49, 52, 53, 54, 55, 56, 57, 58, 59). There is also one in the Victoria and Albert Museum (Interior of the Pavilion of the Grand Vizir with his Divan and Retinue, SD.655).