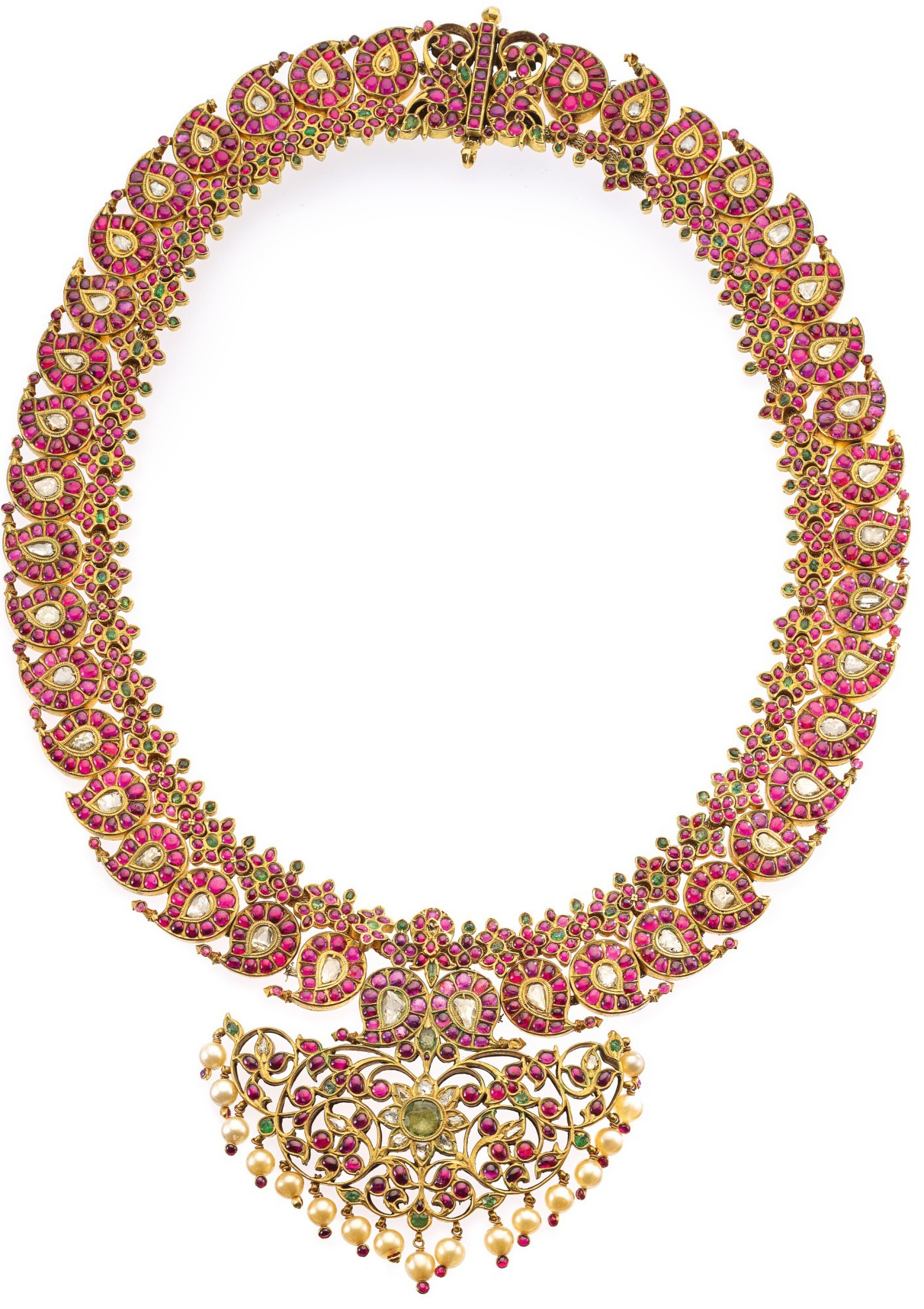 The fine woven metal-thread string on which beads are attached has some breaks and could benefit from professional restoration although the necklace still holds together, the gemstones in good condition, a few small gemstones missing from extremities of mango-shaped beads, clasp opens, as viewed.

The southern part of India, specifically Tamil Nadu, is renowned for its fine golden jewellery, pre-dating even the Sangam period (300 BC-200 AD). Jewellery like this piece was traditionally worn for special occasions such as rituals or weddings, as well as by Bharatha Natvam dancers during their performances (ibid). The Manga Malai, which directly translates to ‘necklace of mangoes’, is unique to ancient Tamil people, dating back to the Chola period (300 BC-1279 AD) or even earlier. The principal elements of design of the Manga Malai represent nature, with various forms of flowers, leaves, fruits and buds. According to Hindu mythology, the mango fruit is a symbol of love and fertility as well as nature, representing a wish-fulfilling tree. This can be seen in the way the present necklace is designed and shaped, with a series of mango-shaped units, held in place by the use of two thattaiyana ponnulla saradu (flat knitted gold wire chains) that pass through loops at the back. Similar gold Manga Malai necklaces to the present example, with Burmese cabochon rubies in mango-shaped units, are illustrated in Krishnan & Kumar 2001, pp.158-9.

Although most Manga Malai that have been preserved until this day look like this one, the traditional form of a Manga Malai normally extends all the way down to the waist. However, for equitable distribution of wealth between daughters and sons, these necklaces have been broken down, which is why most of the surviving examples today are shorter and stop at this length (ibid, p.162). A similar Manga Malai necklace was sold in these rooms, 8 October 2014, lot 302. Additional examples can be found in the David Collection, Copenhagen (Untracht 1997, p.234, no.494); the Museum of Islamic Art, Doha; and the Nasser D. Khalili Collection, London (Moscow 2014, nos.18 & 19).