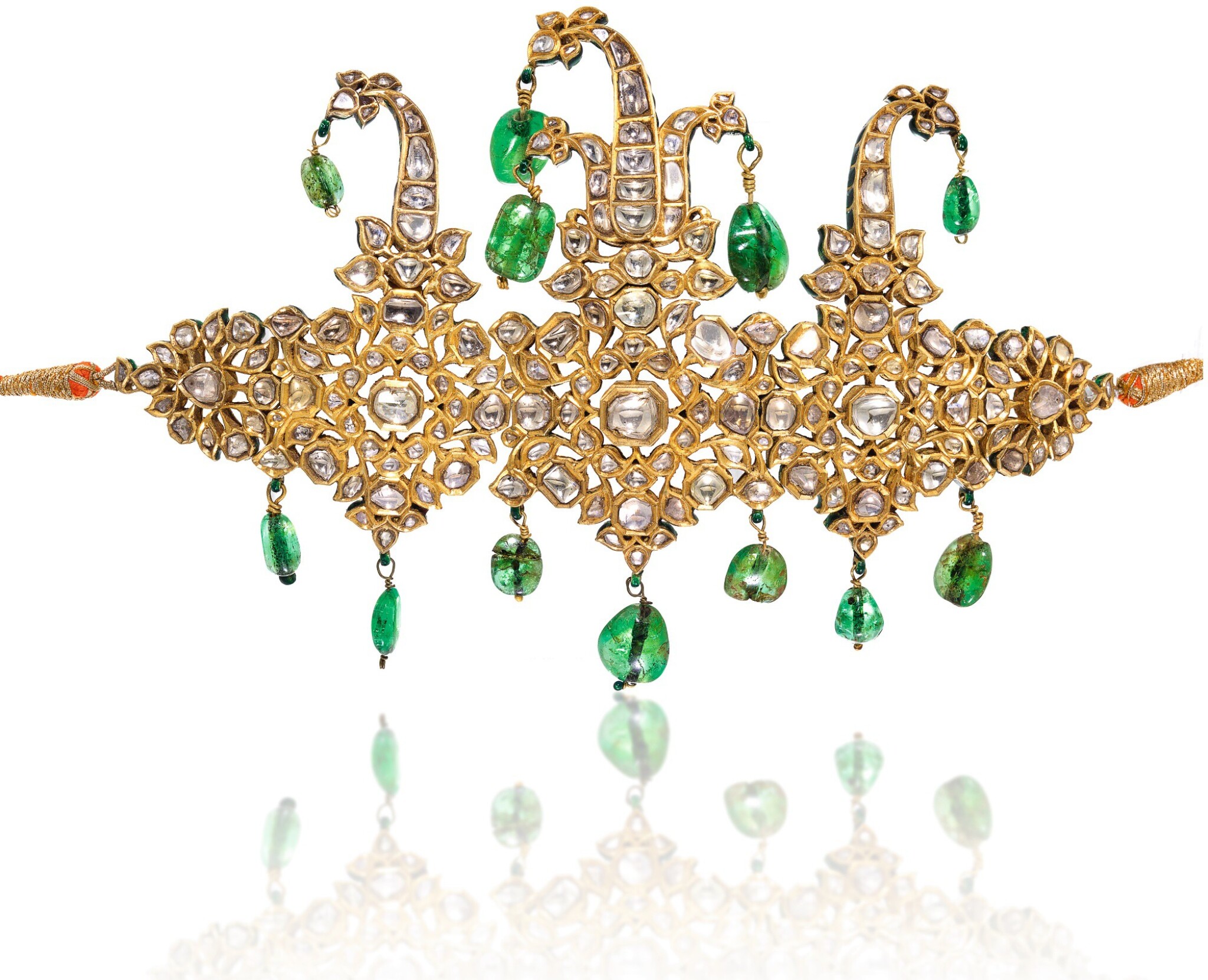 formed of eight hinged sections set in the kundan technique with foil-backed diamonds to the front with twelve drilled emeralds suspended from the top and bottom, the reverse decorated with finely enamelled pink lotus flowers, a plume holder, later strings for fastening

In overall good condition, the diamonds with some oxidisation visible to foiling on back, two diamonds with old drill holes, possibly from another use, the emeralds included with associated discoloration, one broken, some possibly later replacements, the hinge holding together two sections broken and recently restored, enamel strong with very minor wear, as viewed.

Whereas sarpechs normally have a single jigha, this triple sarpech is a particularly elaborate example. According to Katherine Prior and John Adamson, only the Mughal emperor, his intimate relations and select members of his entourage were permitted to wear a royal turban ornament (Prior and Adamson 2000, pp.38-39).

In the period of Emperor Akbar’s reign (r.1556-1605), the principal turban ornament was the kalgi, a simple gold or jewelled stem into which a heron feather was inserted (ibid, pp.38-39). During the reign of Shah Jahan, an ornate jewelled brooch appears to have taken the place of the feather. This solid plume retained the characteristic droop of the Jahangiri feather kalgi and one or more pendant stones were added to it as ornaments. In this form, the turban ornament is known as a jigha, though it is important to note that like the present example, most jighas retain a stem or tana for the insertion of the original feathered plume.

Retaining their imperial connotations, such kalgis were considered as marks of honour, worn by the emperor and ceremonially presented on important occasions. These continued to hold their mark of prestige as notable examples entered into British aristocratic collections. One is in the collection of Robert, 1st Lord Clive ('Clive of India') (illustrated in Prior and Adamson, p.67) and another example now in the Victoria and Albert Museum (inv. no IS.3&A-1982) was originally presented to Admiral Charles Watson on 26 July 1757 by Mir Ja’far ‘Ali Khan, successor to Suraj-ud-Daula as the Nawab of Bengal.