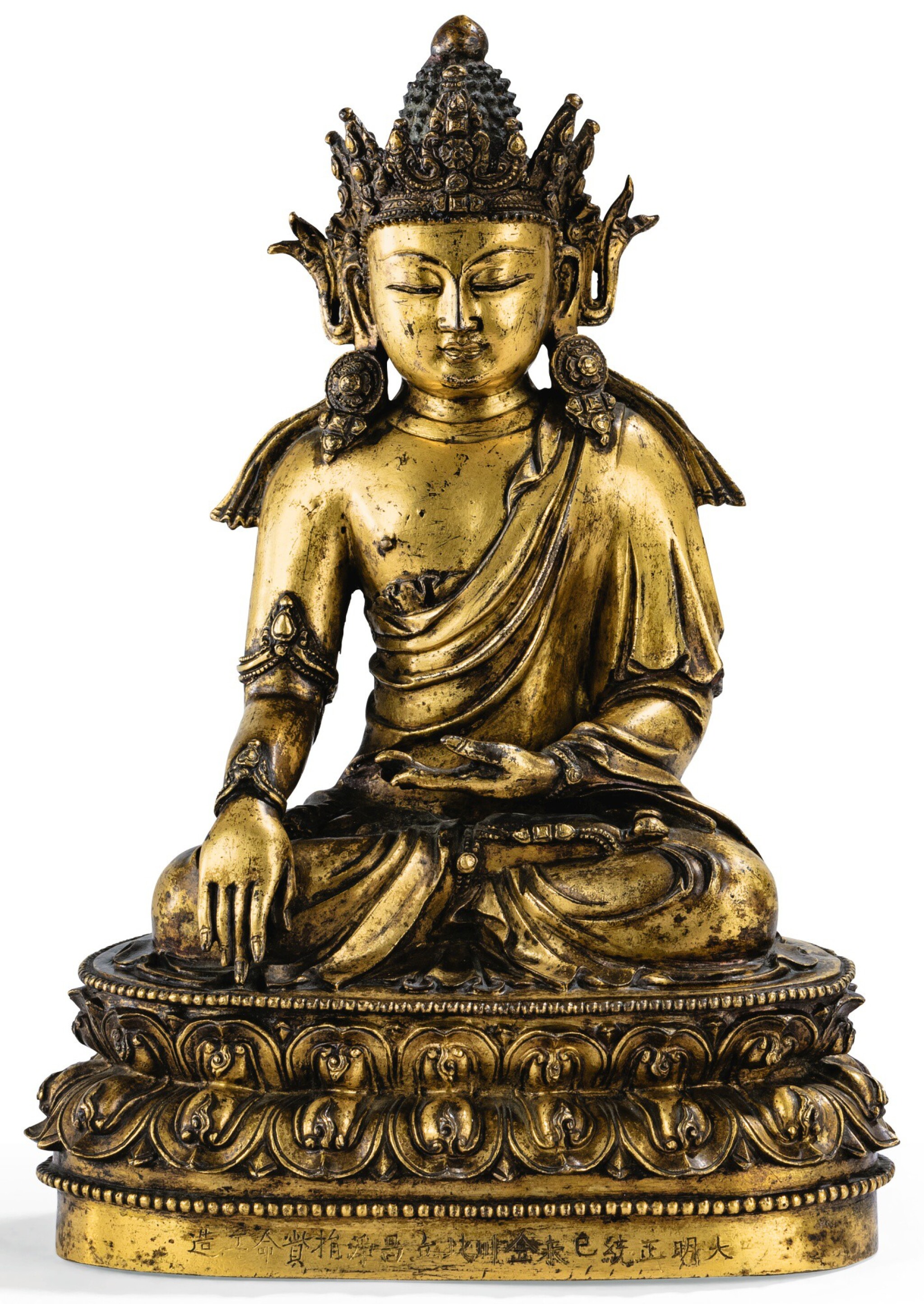 There is overall light wear and scratching to the gilding, particularly around the chest and back. There is a small dent to the upper right hand shoulder. There is a very minor 0.3 cm stress crack to rim of the base on the back of the figure. The base is open.

The finely cast and fire-gilded bronze represents the historical Buddha Shakyamuni as a crowned and bejewelled sovereign, yet wearing the garments of a mendicant. The monk’s inner robe, antaravasaka, is tied at the waist with the hem just visible above the abdomen, and the outer robes uttarasanga and sanghati cover only the left shoulder according to early Indian monastic regulations. The Buddha is portrayed with hands in the earth-touching gesture, bhumisparsha mudra, recalling the episode when as a meditating ascetic he was tempted by the demon Mara and his army of spirits and seductresses, and endured taunts questioning his worthiness to attain the enlightenment he sought. He resisted, and reached forward to call the earth to witness his right to enlightenment. This triumph and the consequent attainment of enlightenment is celebrated in the regalia that adorn this image of Shakyamuni Buddha. The statue is sensuously modelled and imbued with a perception of inner spirituality and calm resolve, the eyes lost in meditation, a gentle expression on the lips and the upright yogic posture. The work is an important art historical document in the stylistic development of early Ming period Buddhist metal sculpture. Relatively high numbers of gilt bronzes were produced in the Yongle period (1403-1424) compared with the Xuande (1425-1435), in part because the Xuande emperor did not lavish gifts on Tibetan hierarchs in the same quantity as his forebear. This trend continued in the Zhengtong period (1435-1449). The overall style introduced in the Yongle period nevertheless remains more or less consistent in this rare Zhengtong example dating to 1439. The robe covers the body in loose folds as seen on the majority of Yongle and Xuande gilt metal statues depicting male and female pacific deities: the scalloped folds of cloth in front of the elbow on the left arm are a distinctive feature of the early Ming style: cf. this detail on the Speelman Yongle Buddha, see Sotheby’s Hong Kong, October 7, 2006, pp. 60-71, lot 808. The crown and earrings are related to Yongle and Xuande models: cf. the large Xuande Amitayus, Sotheby’s New York, March 25, 1999, p. 124-7, lot 121. Compare also the distinctively narrowed eyes of the Xuande Amitayus. Zhengtong period Buddhist sculpture thus remained stylistically related to that of the Yongle and Xuande periods. A small gilt bronze Vajradhara in the Capital Museum with similar crown, earrings, robe style and physiognomic detail to the Shakyamuni Buddha is dated 1436 and confirms this continuity of the earlier Ming style, in Selected Works on Ancient Buddhist Statues, Beijing, 2005, fig. 58, see Michael Henss, Buddhist Art in Tibet, Ulm, 2008, p. 214, fig. 36