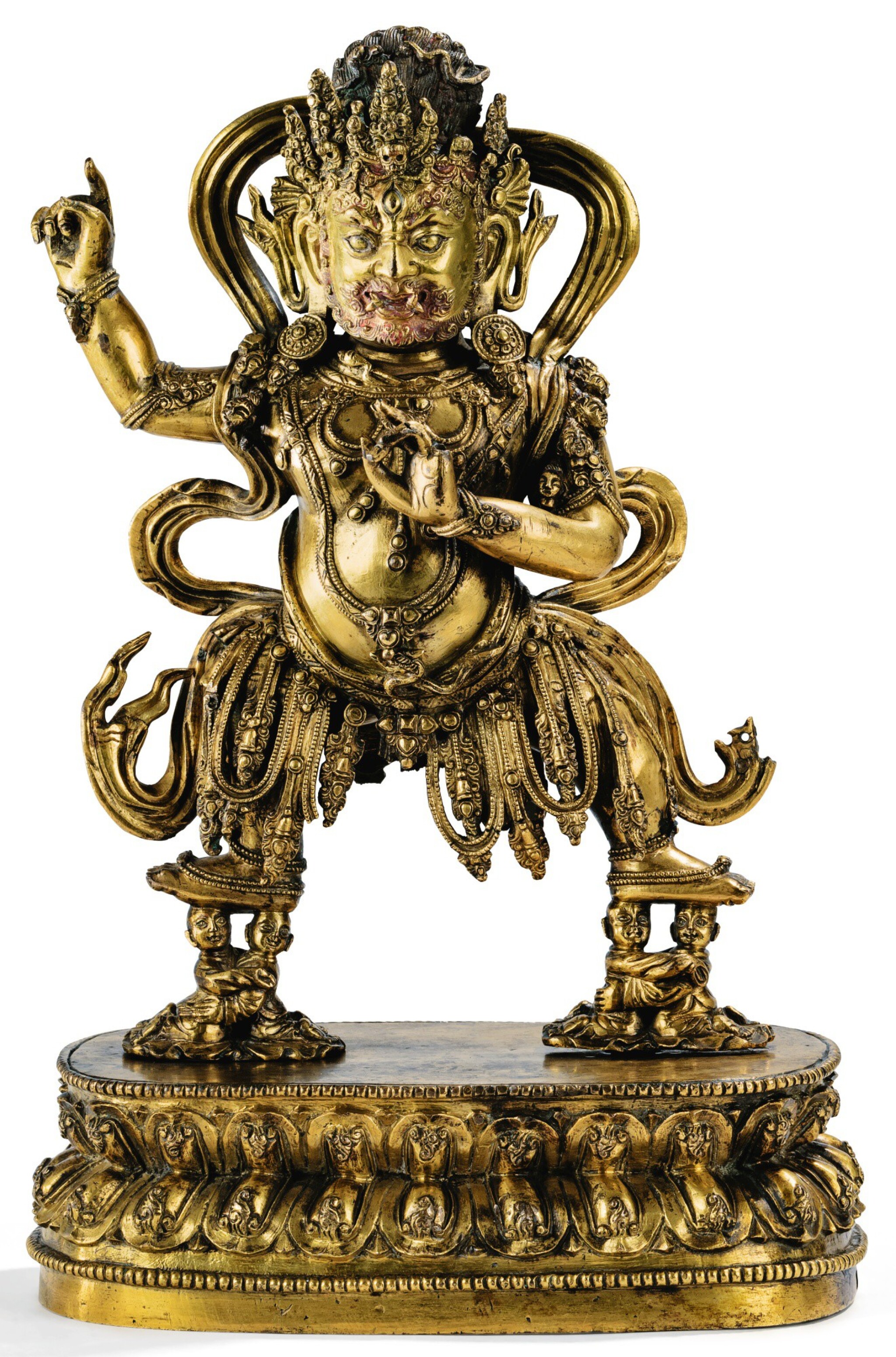 This figure and base are cast separately and are richly gilt and heavily cast. There is minor overall wear and scratching to the gilding and to the surface. Any attributes that may have been there are missing. There is a rectangular-shaped opening to the back. Several areas have been broken off, including one tip of the crown, the tip of the ribbon to the lower left side of the figure, and a few beaded jewels hanging around the lower part of the skirt, the small finger of the figure's left hand and a stress crack to another finger of the same hand and to one finger of the right hand. There are also several cracks, including to one tip of the crown (slightly loose), a beaded jewel to the right side of the figure (secured with screw), and, the areas above the left ankle and right knee. There is break above the knee joint above the right leg and a break to the ankle of the left leg which has been secured.

The base may be associated. The two openings possibly of a later day.

The attributes are missing from the hands of this powerfully modelled tantric deity, making the iconography uncertain. The ithyphallic god displays attributes that distinguish the wrathful Yidam deities of Tibetan Vajrayana Buddhism, including a flaming moustache and beard; a now fragmentary garland of severed heads; a skull crown; a beaded apron of human bone; a snake coiled around a mass of flaming hair; and one draped over the left shoulder and around the corpulent body. Regal jewellery adorns ears, arms and ankles, and a billowing scarf frames the deity as he stands with feet planted in a dramatic and aggressive posture.

The Chinese symbol of two embracing boys beneath the feet of the Yidam is an unusual feature in a Vajrayana Buddhist context, and may not be original. The refined modelling of the deity, however, bears stylistic and iconographic similarities to good early Ming gilt bronze sculpture: compare the style and modelling of the earrings with the Zhengtong period Buddha dated 1439, lot 18 in this sale. The large snake head entwined with its own tail at the abdomen is a classic design used in tantric imagery throughout the Yongle (1403-24) and Xuande period (1426-36), cf. the Vajrabhairava formerly in the A&J Speelman collection, Sotheby’s Hong Kong, 7th October, 2006, pp. 92-9, lot 812: cf. also the bone apron and the powerful modelling of a mid-fifteenth century Guhyasadhana Dharmaraja in the Potala, Lhasa, see Ulrich von Schroeder, Buddhist Sculptures in Tibet, Hong Kong, 2001, Vol. II, p. 1289, pl. 362C.

Close similarities to stylistic and iconographic design in classic early Ming Vajrayana gilt bronze sculpture suggests that this figure may be confidently dated to the fifteenth century. A Mahakala in the Palace Museum, Beijing, in The Complete Collection of Treasures of the Palace Museum: Buddhist Statues of Tibet, Hong Kong, 2003, pp. 180-1, cat. no. 172, is undated but has as an almost identical pedestal design and similar jewellery to a Vajradhara dated 1436 in the Beijing Capital Museum, in Selected Works on Ancient Buddhist Statues, Beijing, 2005, fig. 58, see Michael Henss, Buddhist Art in Tibet, Ulm, 2008, p. 214, fig. 36. The Palace Museum Mahakala is thus likely to date to the first half of the fifteenth century. Stylistic similarities between the present tantric figure and the Palace Museum Mahakala would suggest that this Yidam may also be dated early to mid fifteenth century.