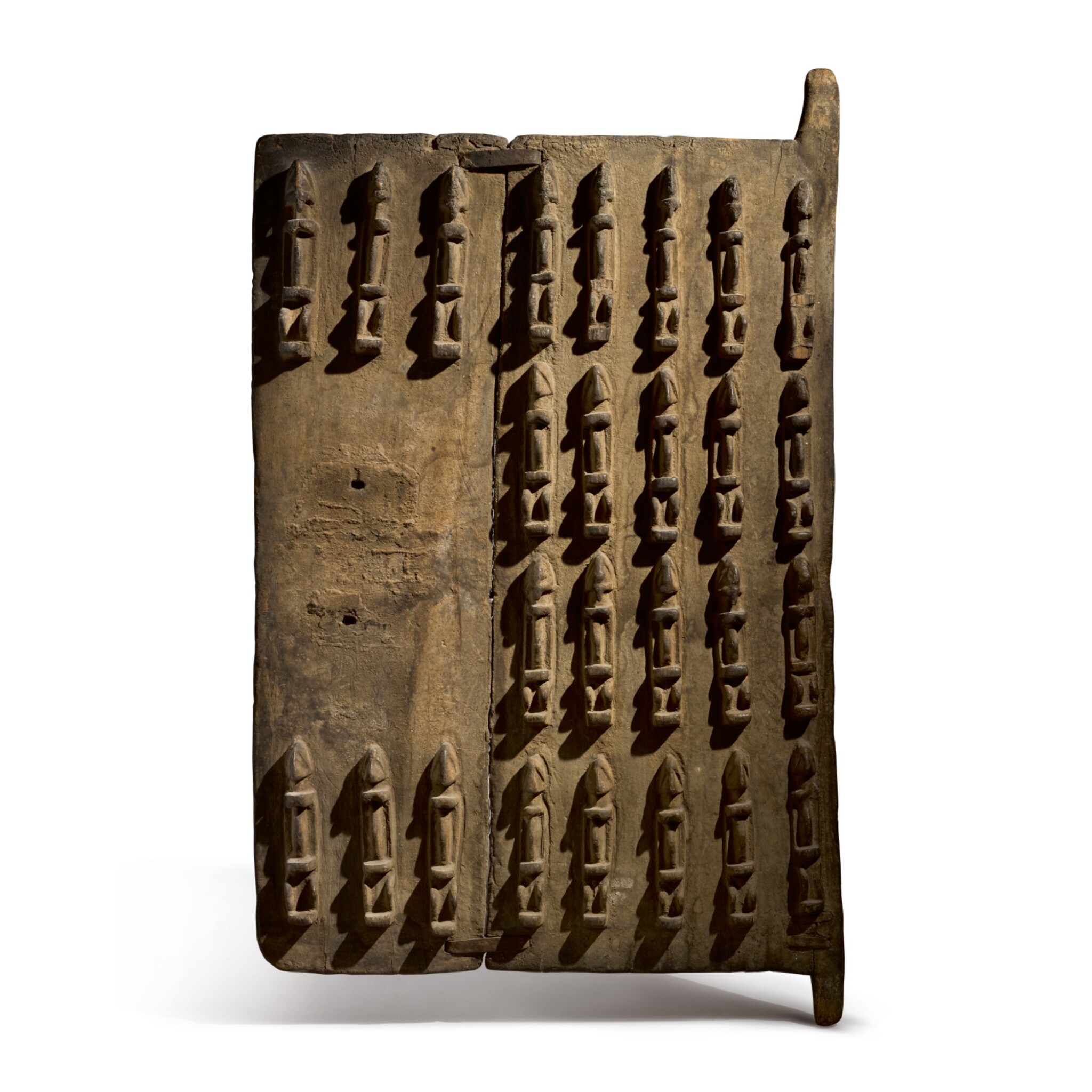 Private Collection, New York, acquired at the above auction

This finely-carved shutter or door once adorned a Dogon granary, serving both to protect and sanctify the life-giving stores of food contained inside. According to Hélène Leloup (Dogon Statuary, Strasbourg, 1994, p. 487), rows of figures seen on Dogon granary doors represent patrilineal ancestors. The presence of male and female figures in the present example suggest the male-female duality which is central to Dogon origin myths; these primordial couples are the progenitors of humanity, the ideal compliments to one another, and the source of life.

LaGamma (Genesis: Ideas of Origin in African Sculpture, New York, 2002, p. 28) notes: "In 1931 a team of French researchers led by Marcel Griaule arrived in the village of Sanga, in present-day Mali, to undertake a study of Dogon culture. Griaule's investigations sought to expose the inner workings of Dogon thought and religious belief about the world and its origins. In the process he became aware of a vast corpus of myths that described 'a complex cosmogony, an epic struggle between order and disorder, and the place of humanity within the universe' [Ezra, Art of the Dogon, New York, 1988, pp. 15-16]. According to the Dogon mythological system described by Griaule and other members of his team, the divine power of Amma created the first living being, called Nommo, who multiplied to become four pairs of twins. One of these Nommo twins rebelled against the order set in place by Amma. In response, Amma, seeking to purify the universe and restore order, sacrificed one of the other Nommos. Thus Nommo's body was cut up and scattered throughout the universe, and from these parts Amma created eight ancestors of humanity: four males - Amma Serou, Lebou Serou, Binou Serou, Dyongou Serou - and their four female twins. In the final phase of genesis, these eight ancestors, together with another Nommo and everything needed for human life, were placed in an ark and sent to Earth [ibid., p. 20]. Griaule and his colleagues based their investigations on the premise that 'the everyday object may reveal in its form or decoration a concious reflection of this complex cosmogony' [Griaule, Dieu d'eau, Paris, 1965, p. xiv]."