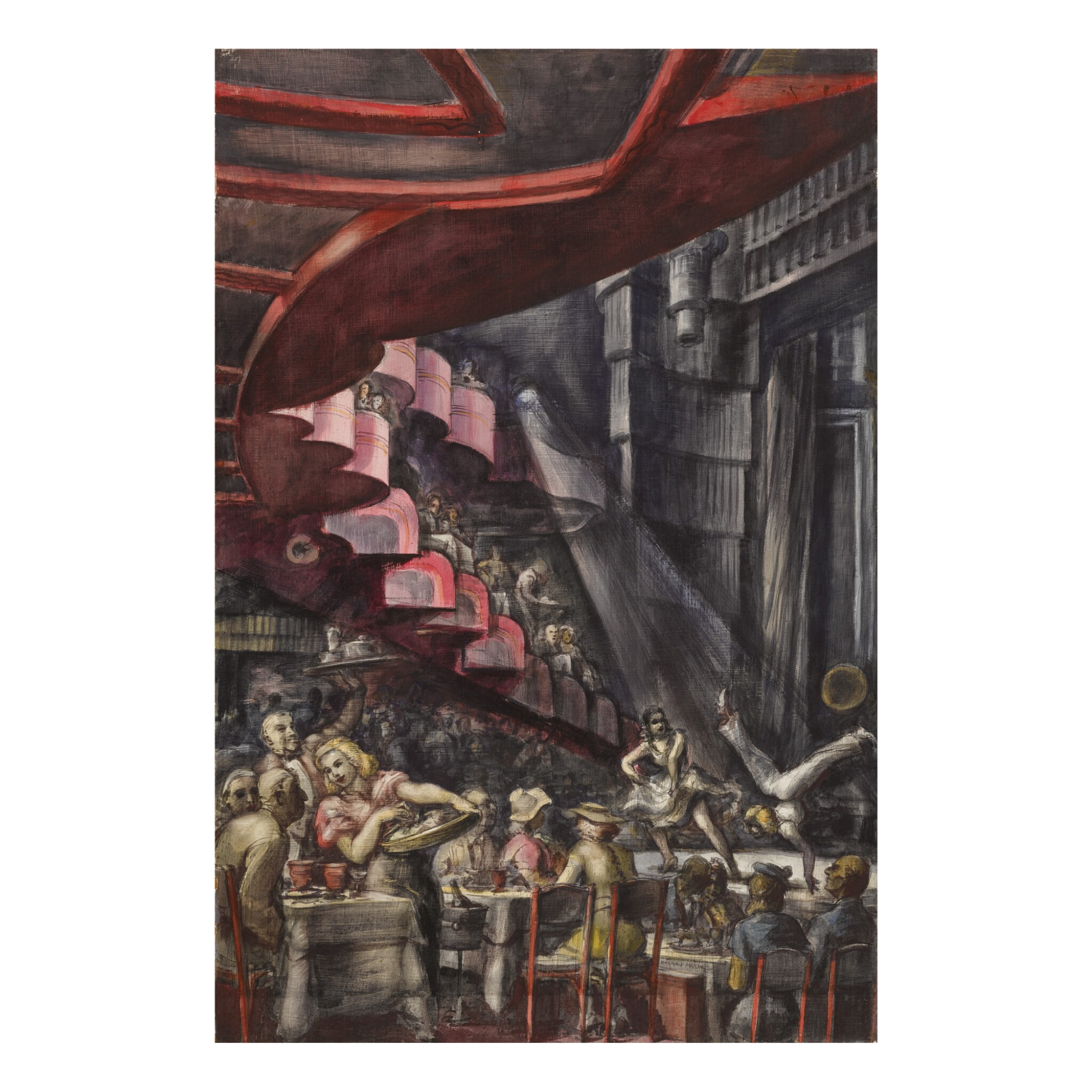 tempera and pencil on gessoed Masonite

After graduating from Yale University in 1920, Reginald Marsh moved to New York to pursue a career as a freelance illustrator and caricaturist for several city-wide and national publications, including The New Yorker, Vanity Fair and The Daily News. To supplement his income, Marsh also designed curtains and sets for theatrical productions. In countless paintings, drawings and sketches, he sought to capture the city’s modernity. Often teeming with lively human figures, his scenes depict many of New York’s iconic landmarks, including Coney Island and Times Square, along with seedier locales such as subways, The Bowery, burlesque parlors and dance halls. These works, coupled with his depictions of what became known as the “Marsh girl” – an attractive an independent reinvention of the “Gibson girl” – helped to define the artist’s distinctive aesthetic. Painted by 1938, Cabaret depicts a lively musical performance within a dramatic art deco structure built in New York during the interwar years.

In 1919, Thomas Hart Benton introduced Marsh to the egg tempera medium. Marsh wrote of the unique medium, “…It opened a new world to me. Egg is a fine ‘draftsman’s’ vehicle and very easy to handle…The luminosity and clearness of drawing is preserved, yet a certain greasy quality of the yolk gives a ‘fat,’ oily effect. Drying is instantaneous, and superimposed brush strokes are easily made…I put egg yolk on a kind of belt line production for a dozen years and chucked oil forever” (as quoted by Lloyd Goodrich, Reginald Marsh, 1955, p. 8). Marsh utilized tempera extensively for the remainder of his career. As demonstrated in works such as Cabaret, this immediate and multilayered medium allowed him to expertly capture the vitality and dynamism of urban life. The present work was used as an illustration for a story titled “Vaudeville Wears False Whiskers”, which was published in Fortune in 1938. Given Marsh’s close relationship with Senator William Benton, it may have been a direct gift from the artist or a later purchase by the Senator.