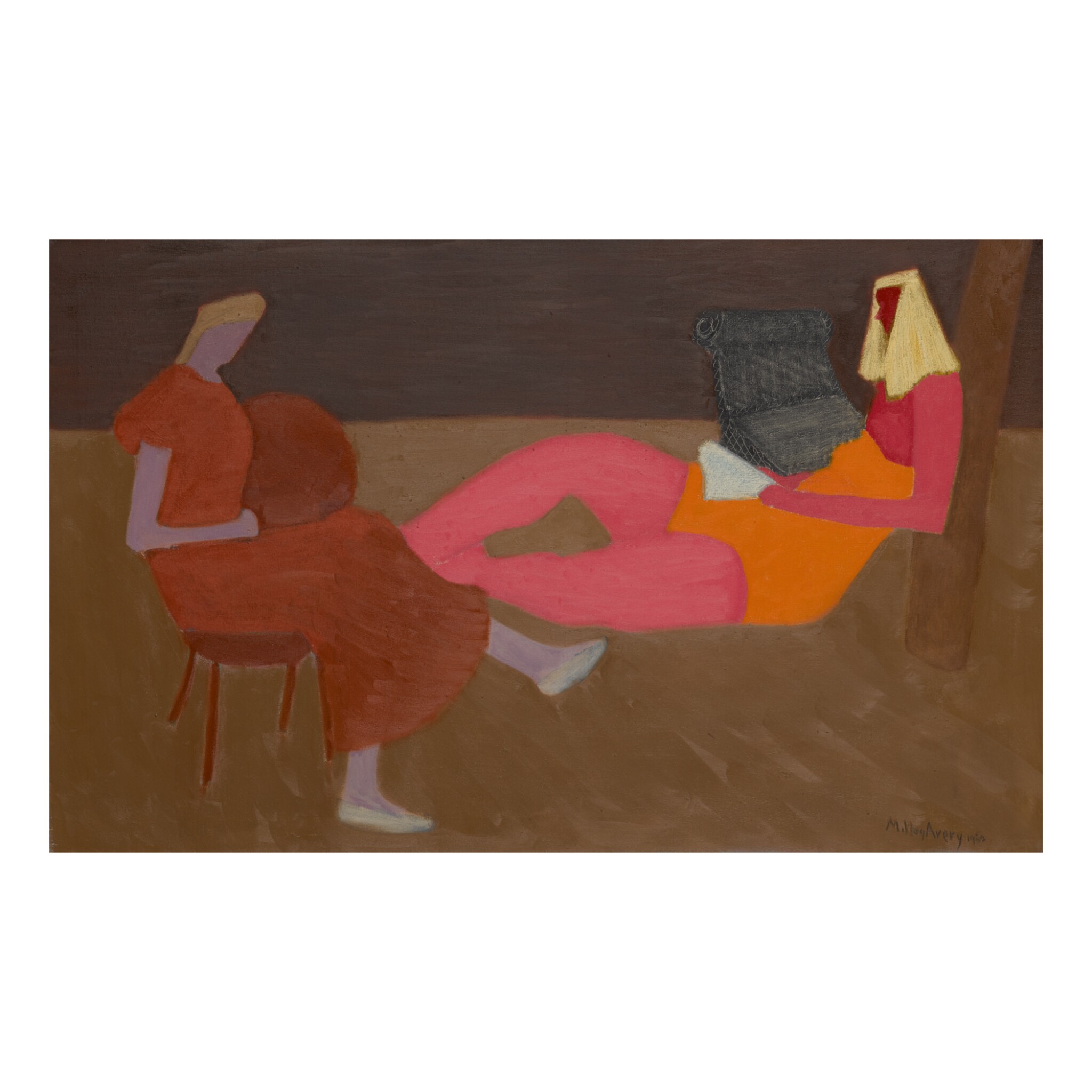 Acquired by the present owner from the above, 1998

Porch Sitters belongs to a remarkably innovative and productive period in Milton Avery’s nearly 50-year career, when he began to reformulate the lens through which he viewed the world around him. “His pictorial focus shifted from the description of individual parts within a composition to the harmony of the whole,” explains Barbara Haskell. “Overall tonal harmonies replaced the contrasting color areas typical of his work of the preceding decades…by broadly generalizing contours, and minimizing shapes and graphic details, he sought to transcend the particular factual accidents of his subjects and capture their universality—whether of individual form or of essential relationships between objects…” (Milton Avery, New York, 1982, p. 158). Painted in 1952, Porch Sitters exudes a striking sense of harmony and balance, illustrating Avery’s ability to reinvent a representational, domestic scene as a complex arrangement of color and pattern.

In Porch Sitters, Avery depicts his daughter, March, as she reads, accompanied by a female companion. Born in 1932, March became a frequent source of inspiration for her father throughout her childhood and adolescence, and along with his beloved wife, Sally, served as Avery’s most important subject and muse (Fig. 1). While images of both women pervade his oeuvre, Porch Sitters is an outstanding example of this iconic imagery, expressively capturing the close bond the artist shared with his daughter.

Porch Sitters was likely painted in Woodstock, New York where the Avery family often spent the summers during this period. With their bodies positioned closely together, the two women are depicted relaxing outdoors in a scene that emanates leisure and tranquility. Although the primary elements of the scene are instantly recognizable, the artist reinterprets the scene through an economy of means, deconstructing both the figures and their setting into simplified areas of color. He strives to maintain a flattened pictorial plane, only suggesting illusionistic recession and in fact manipulating it as he depicts March’s companion in the foreground with her legs overlapping March’s, yet at the same time portraying March herself in a medley of brightly colored hues that seems to propel her figure forward in the picture plane. The resulting spatial tension reveals an artist exploring the structural function of color, and how it could be used to delineate three-dimensional depth, form and space within the flatness of the picture plane.

Indeed, Porch Sitters exemplifies the evolution in treatment of color that Avery’s work underwent in the early 1950s. Previously known as the “American Fauve” due to his preoccupation with vibrant, contrasting colors similar to those used by painters such as André Derain and Henri Matisse, Avery now adopted a more refined and atmospheric palette, ultimately striving to achieve an overall tonal harmony within a single composition (Fig. 2). Concurrently, he began to zealously experiment with monotype, a form of printmaking that involved the sponging of wet, heavily diluted paint onto plate glass. Avery executed nearly 200 prints during this period, and when he returned to painting, the canvases he produced became characterized by a much more fluid application of pigment, as he delicately applied washes to create large and chromatically nuanced planes of color.

Here, Avery has predominantly replaced the brighter tones of his earlier work with softer hues of rich burgundy and taupe that demarcate the porch and sky. He unites these large color areas through a delicately applied red underpainting. The effect creates a more diffuse, atmospheric quality that ultimately contributes to the unity of the composition and presages the ambient fields of color he would continue to expand through the remainder of his career. Indeed, today Avery is considered among the earliest American practitioners of chromatic abstraction. While exemplifying the distinctive blend of realism and abstraction that defines Avery’s most celebrated style, Porch Sitters also illustrates Avery’s experiments with the expressive power of color and positions him as the precursor to such iconic American painters as Adolph Gottlieb, Mark Rothko and the proponents of the Color Field movement, who would go on to push his innovative ideas fully into the non-objective (Fig. 3).