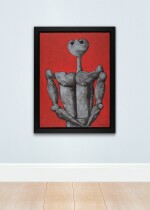 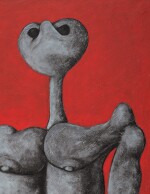 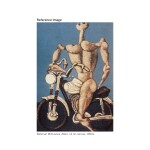 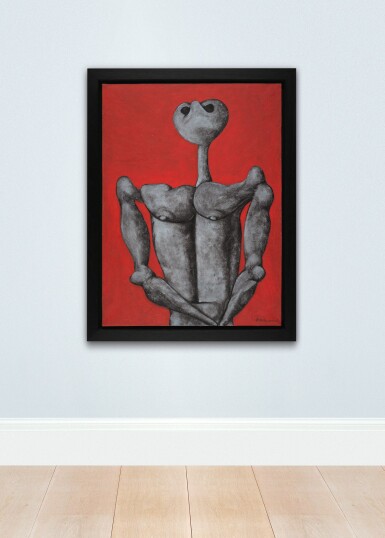 signed and dated B. Mohasses '66

This work is in very good condition. There is no restoration apparent when viewed under the UV light.

Collection of the artist, Rome

Francesco B. Collection, Italy (acquired directly from the artist)

Private Collection, USA (acquired directly from the above)

Acquired directly from the above by the present owner in 2016

Bahman Mohassess was indisputably the most acclaimed Iranian artist of his era. Often referred to as ‘the Picasso of Iran’, Mohasses was ahead of his time in many ways. He showed artistic ability at a very young age, by fourteen he was learning to paint from a local teacher in Rasht, Iran. He then moved to Tehran where he attended the Tehran University Faculty of Fine Arts, and in 1954 he moved to Italy to study at the Fine Art Academy of Rome.

Mohasses was a well-read intellectual, familiar with Greek mythology, early European classics, and French intellectual thinkers. His scope of knowledge alongside his own inclination towards existentialism, influenced and added to his artwork in significant ways. Mohasses was not only complex and charismatic, but also fearlessly vulnerable and ferociously opinionated. His strong characteristics were projected throughout his lifetime of works, evoking the same aesthetic daringness of Louise Bourgeois and Pablo Picasso.

As one of the great minds of the 20th century, Mohasses did not aspire to appeal to a mass market. He was not interested in beautifying his works – his aesthetic was rather an emphasis on the human condition in all its raw misfortune. He depicted dark figures of mythological origin: beasts and minotaurs, as vessels to express his personal anguish and despair.

This 1966 work is a perfect example of Mohasses’ aesthetic: a robust and austere figure, whom despite a strong-muscular torso, stares back at the spectator with desperate and vulnerable, hollow eyes. Set against a stark bleeding red background, the work reflects Mohasses’ unique ability to portray mixed emotional states of strength and vulnerability in one work. The strong torso yet notably displaced eyes, are perhaps a reflection of Mohasses himself, who often felt alienated and helpless in a world ravaged by political conflict and cultural adversity.

Through-out his life, Mohasses’ works faced destruction on many levels: lost, stolen, confiscated, censored, dismantled or destroyed if not by others, then by Mohasses himself, who snubbed the notion of a legacy, posterity, or inheritance. Mohasses’ entire oeuvre is credited with the artist’s ability to depict raw feeling, bordering existential anguish. The mid-1960s to the early 1970s was a prolific period for the artist. His work from the 1960s has held a particular fascination to the discerning eye due to its depth of expression and its chilling host of quasi-mythological characters.

In the words of Mohasses himself, upon describing one of his minotaur work’s, he exclaims: “My creatures exist in a theatre stage. If you look closely, this Minotaur here is currently dying right before the spectator’s eyes!” (Mitra Farahani, Director, Fifi Howls From Happiness. Butimar Productions, 2013).