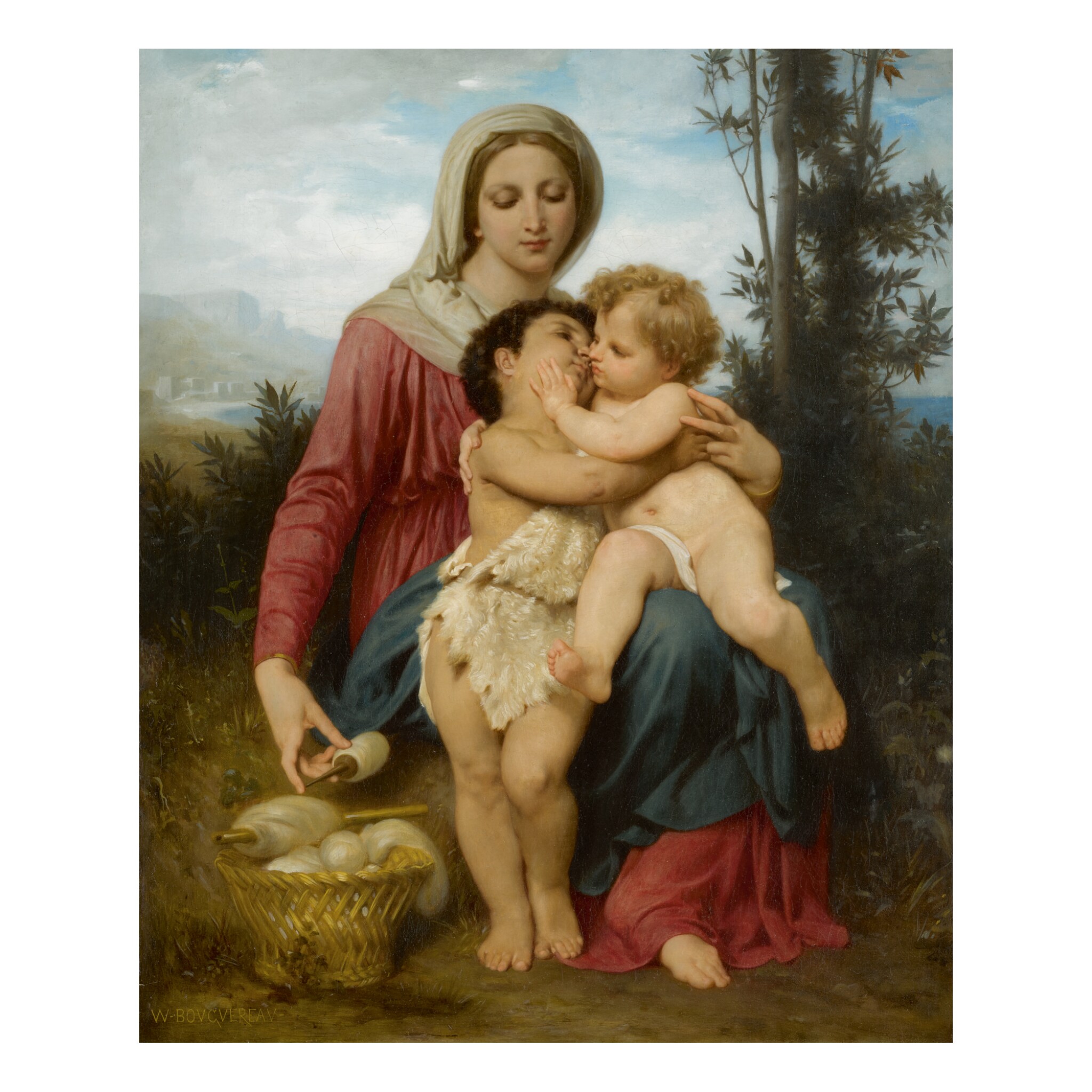 We would like to thank Frederick C. and Kara Lysandra Ross for kindly confirming the provenance of this lot.

The present lot is a réduction of William Bouguereau’s celebrated Salon picture, Sainte Famille (1863, Private Collection), well-known during the Second Empire because of its illustrious provenance. The large-scale religious work was purchased by Napoleon III shortly after the opening of its Salon exhibition. It was intended for his wife, Empress Eugénie, who exhibited it in her Tuileries apartments. She kept it in her collection for the remainder of her life, even after her exile in England, where the work was displayed in her fine gallery at Farnborough Hill, Hampshire.

As a result of this renown, engravings after this canvas were highly sought after and circulated on the market. Beginning in 1859, Bouguereau had begun to paint réductions of major paintings to facilitate the production of engravings. Because the original paintings upon which these engravings were based tended to be quite large, réductions, typically one half or one third of the original’s size, were less cumbersome for engravers. Despite the reduced size, these works were faithful copies of the original compositions. Réductions were sometimes painted in collaboration with his studio, though the artist’s hand is evident in the masterful treatment of faces, hands, and drapery.

Set in an Italianate landscape, the subject of the present lot is instantly recognizable. The Virgin Mary, with her traditional blue cloak, holds the infant Christ on her lap as Saint John the Baptist, wearing his characteristic animal hide, lovingly embraces him with a tender kiss. The basket of thread at John’s feet could represent Mary’s symbolic role as a spinner of the Thread of Life, recalling Medieval and Renaissance images of the Madonna not enthroned but instead engaging in common household tasks, such as sewing or reading, allowing the pious to see themselves reflected in the divine.

Religious paintings make up an important part of the devoutly Catholic Bouguereau’s oeuvre. Though he did receive a number of clerical commissions, he also painted biblical subjects that were chosen independently. These compositions were inspired by the works of Renaissance masters such as Michelangelo and Raphael who he encountered after winning the Prix de Rome, when "his youthful meditations had evolved into the pious reflections for which he had an instinctive leaning" (Damien Bartoli and Frederick C. Ross, William Bouguereau, his life and works, New York, 2010, p.146). Years later, in a letter to Paul Eudel dated 1886, Bouguereau wrote, "the artists I place above all others… are firstly Michelangelo, Raphael, and Leonardo da Vinci, those sturdy caryatids that have borne on their giant shoulders the weight of everything known in their day" (quoted in Bartoli and Ross, 2010, p.460).

Shortly after winning the Prix de Rome, Bouguereau painted L’Amour fraternel in 1851 (Museum of Fine Arts, Boston, fig. 1). This simple and harmonious triangular composition of Madonna, Christ and John the Baptist set against a landscape became an archetype that Bouguereau would adhere to for years to come. This compositional arrangement, idealized and bucolic yet unassuming, first seen in L’Amour fraternel and later the present work, recalls the Madonna and Child paintings of Raphael, exemplified in his famed La belle jardinière (Musée du Louvre, Paris, fig. 2).