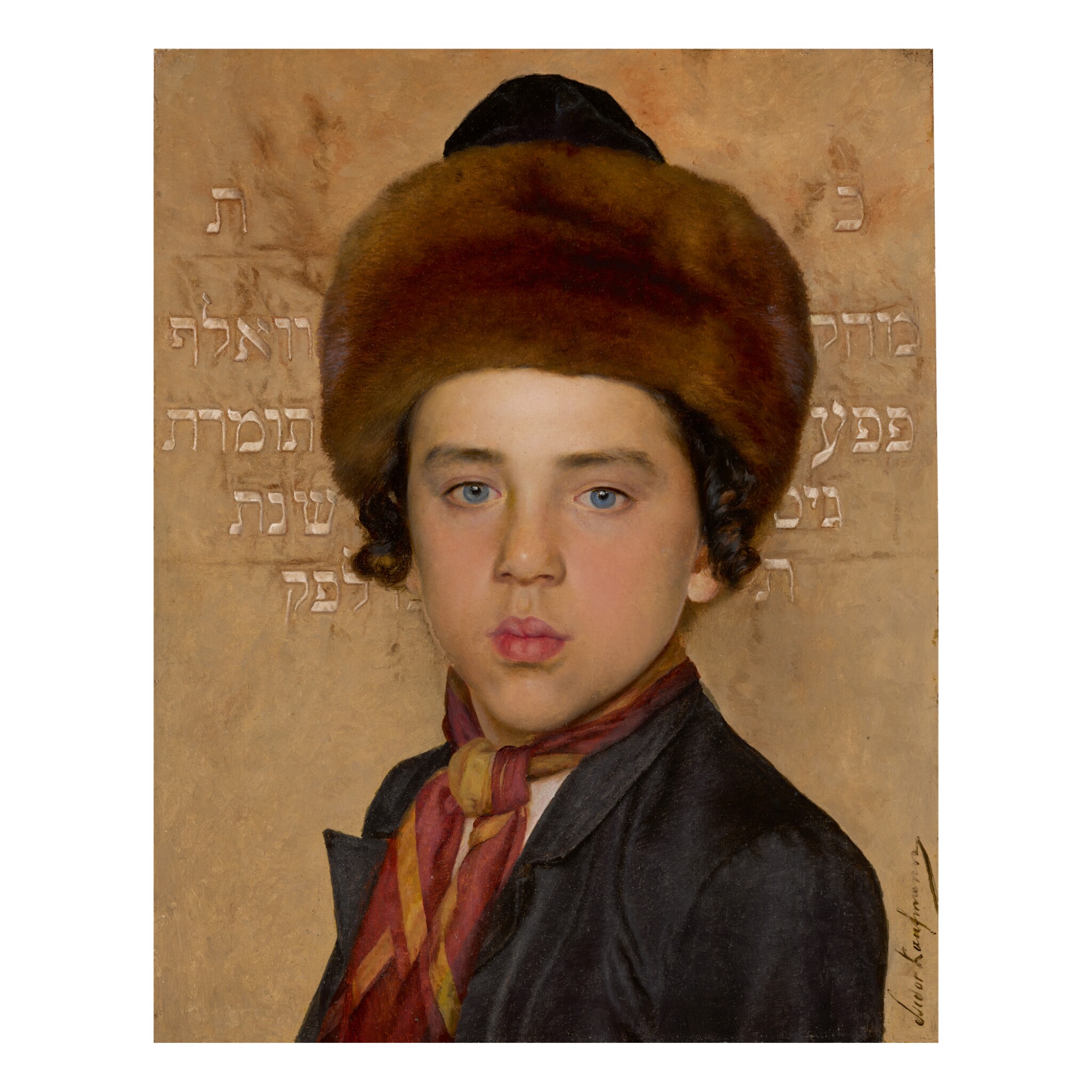 PORTRAIT OF A BOY

In this arresting image, Isidor Kaufmann’s son, Eduard, poses as his model and looks directly outward with piercing blue eyes resting fixedly on the viewer. Kaufmann employed his considerable talent in rendering the myriad textures of the boy’s Hassidic clothing, from the soft velvet and lustrous fur trim of the spodek to the jauntily tied red and gold scarf contrasting with the matte black jacket. The spodek (or spodik) was a type of tall fur hat or streimel favored by the Polish Hassidim whom Kaufmann would have encountered during his summer visits to the small towns and centuries old synagogues in Western Hungary, Galicia and Russian Poland.

Eduard is enveloped by the soft golden glow of a parokhet (the curtain which covers the Torah Ark), which gives the image a beautiful luminosity. Though the gold embroidered dedication is mostly obscured by the sitter, the two letters at the top of the picture spell Keter Tora (Crown of Torah), which often appeared on Torah Ark curtains. In the second row, at left, is the word Wolf, another version of the name Isidor, a possible reference to the painter himself.

Kaufmann’s lustrous colors and precise line, portrayed brilliantly in the present work, won him the admiration of many during his lifetime: “In addition to the brilliance of his colors, it was especially the objective accuracy of his drawings that disciplined the interaction of all pictorial elements and in combination with the brightness of the images inspired the feeling of clarity which reminded some of Kaufmann’s contemporaries of no less a master than Hans Holbein the Younger” (G. Tobias Natter, ed., Rabbiner, Bocher, Talmudschüler; Bilder des Wiener Malers Isidor Kaufmann, 1853-1921, exh. cat., Vienna, 1995, p. 29).

Kaufmann was celebrated for his synagogue interiors and his dignified portraits of rabbis and Talmudic scholars, yet his images of young orthodox boys are among his most popular subjects, pointing to the preservation and continuation of Jewish culture. They can also be placed among the finest Naturalist and Realist paintings of his contemporaries in France and Germany. The wide-ranging reach of Kaufmann’s work was secured by several international exhibitions, including the Exposition Universelle of 1900 in Paris, where he was one of many European artists revealing regional and cultural themes (Richard I. Cohen, “Artist’s Biographies,” p. 175-6; Gabriel P. Weisberg, “Jewish Naturalist Painters: Understanding and Competing in the Mainstream,” The Emergence of Jewish Artists in Nineteenth-Century Europe, exh. cat., The Jewish Museum, 2001-2002, p. 149). More recently, Kaufmann’s place in the history of Viennese portraiture was recognized with his inclusion in the landmark exhibition Facing the Modern: The Portrait in Vienna 1900 at the National Gallery, London in 2013-14, alongside such titans as Gustav Klimt, Egon Schiele and Oskar Kokoschka.

Another slightly larger version of this composition is in the collection of the Jewish Historical Museum, Amsterdam (no. 02977).