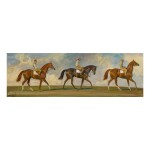 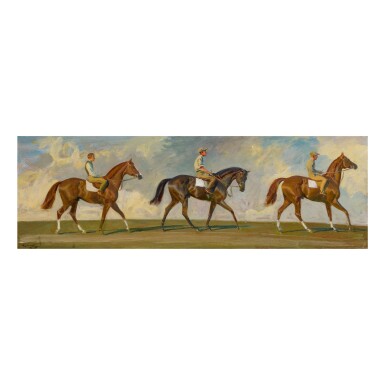 Richard Green, London (donated by the artist with proceeds to go to the Hungarian Uprising Relief Fund, according to an inscription on the reverse)

The University of British Columbia, Vancouver (gift from the estate of the above and sold, Sotheby’s, New York, October 12, 1994, lot 215, illustrated)

London, The Royal Academy of Arts, Diploma Gallery, Works by Sir Alfred Munnings, 1956, no. 226 (lent by the artist)

In The Queen’s Horses: "Corporal," "Biscuit," and "Aureole", three thoroughbreds are arranged in a single line, as if a classical frieze, silhouetted with their grooms against a pastel blue, cloud filled sky. According to an inscription on the reverse the horses - from left, Corporal, Biscuit and Aureole - belonged to Queen Elizabeth II, an accomplished horsewoman herself. Sir Alfred James Munnings was familiar with the Royal Family and their deep attachment to horses and racing long before he painted the present work in the early 1950s.

The inscription further details that this work was painted at the stables of Captain Cecil Boyd-Rochfort, a war hero who was trainer for King George VI and then Queen Elizabeth II from 1943 until 1968, the same year he was knighted. Boyd-Rochfort’s stables were at Freemason Lodge in Newmarket, about forty miles from Munnings’ home at Castle House, Dedham, the racecourse that is home to both the 1,000 Guineas Stakes and the 2,000 Guineas Stakes. Munnings kept a studio at the track, courtesy of the Jockey Club, and made the journey often to the races, commenting “Be it spring, summer or autumn, for me it is a succession of lovely sights… I never tire of this journey from Dedham to Newmarket, through the loveliest districts in Suffolk” (Sir Alfred James Munnings, The Finish, London, 1952, p. 201-02).

Corporal – at far left – was foaled in 1952 by Court Martial (1942) out of Carmen. Court Martial was bred by Lord Astor and won both the 2,000 Guinea and the Champion Stakes in 1945; he went on to be a two-time leading sire of the year. Munnings painted Corporal’s great-grand-sire Fairway (1925) and great-great-grandsire Son-in-Law (1911).

Aureole – depicted at far right – was a bright chestnut with a white blaze and three white socks. His sire was Hyperion, the winner of The Derby and the St Leger in 1933, owned by Lord Derby and painted by Munnings in the 1930s (Sir Alfred James Munnings, The Second Burst, London, 1951, p. 266). His dam was Angelola, second in the 1948 Oaks and winner at the Yorkshire Oaks. Bred by George VI, Aureole passed to Queen Elizabeth on the king’s death, and had a reputation for being high strung and excitable. While he had a strong record through 1952 and 1953, it was not until 1954, his four-year-old season, that he found true success. In that year, Aureole won his last four races: the Victor Wild Stakes at Kempton, the Coronation Cup at Epsom, the Hardwicke Stakes at Royal Ascot, and the King George VI and Queen Elizabeth Stakes at Ascot, a race named after the Queen’s parents.

Aureole’s victories inspired excitement in his young owner and in her subjects – his win at Ascot was declared “one of the most popular victories in British turf history” by the Australian Associated Press (“Queen’s Win Was Most Popular in History,” The Mercury, Hobart, Tasmania, July 19, 1954, p. 3). Due to his winning record and season winnings of over £30,000, the highest ever for a Royal horse, Queen Elizabeth II was named the leading owner in Britain in 1954, the first time a reigning sovereign had topped the winner’s list (John Hislop, “Reviewing the Past Season,” The Observer, November 14, 1954, p. 12). Munnings depicted Aureole and his Royal owner multiple times. Her Majesty The Queen and her racehorse ‘Aureole’ with trainer Captain Cecil Boyd-Rochfort and jockey Eph Smith was presented to the Queen in 1957 and is now in the Royal Collection.