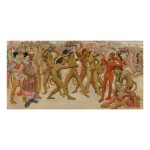 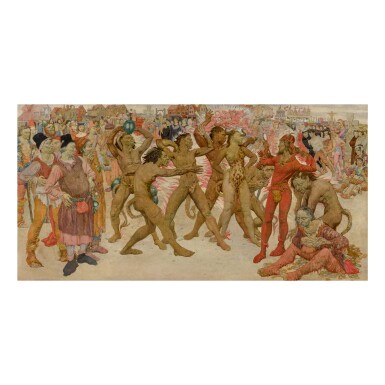 Lined. The surface presents well. There are a few isolated areas of faint craquelure, with a pin dot loss beneath the underarm of the sin at far left. There is surface dirt and dust at the extreme edges. There is minor frame abrasion near the upper left corner, with two associated pin dot losses. There is an additional small dot of loss at the lower right edge. Under UV: varnish fluoresces green unevenly. There are two 1 1/2 inch vertical, finely applied repairs near the lower right edge and at the upper center edge (both somewhat visible to the naked eye), and a small 1 1/2 inch wide area of inpainting at lower left. There are a few isolated finely applied dashes of retouching and reinforcements in and around the figures. There is some inpainting in the upper left corner and, a few dots of retouching at the right upper edge.

Noel Ruth Laura Helen Nisbet (later known by her married name Noel Laura Bush) was a prodigious and imaginative artist and illustrator who found inspiration in her Pre-Raphaelite predecessors. Raised in a family of artists, she remembers “I was fortunate in my early days, in being brought up in imaginative surroundings and an atmosphere of books, for my father was a writer of romances, a painter, and a poet” (as quoted in Jeff A. Menges, 101 Great Illustrators from the Golden Age, 1890-1925, New York, p. 141). Formally trained at the Clapham School of Art, beginning just before the turn of the century, she received medals for her work, and was elected to the Royal Institute of Watercolor Painters and the British Watercolour Society, in 1926 and 1945, respectively.

A regular exhibitor at the Royal Academy, Nisbet often earned praise, and in 1913, The International Studio lauded her in a review of an exhibition at the Victoria and Albert Museum: “The vigour and dedication of Miss Nisbet’s pen-drawing showed no falling off in these studies of hordes of savage warriors of a bygone day, which were as full as ever of invention and careful detail” (W.T. Whitley, “The National Competition of Schools of Art,” The International Studio, July 1913, p. 292).

Painted in 1940 Seven Deadly Sins is inspired by William Langland’s fourteenth century narrative poem, William’s Vision of Piers Plowman. Considered a precursor to Chaucer’s Canterbury Tales, the poem is narrated by the wandering figure of William, also called Will, who is guided on a spiritual quest by Piers Plowman, himself an allegory of Christ. This scene is drawn from the second vision, passus five, in which Will observes the personifications of sin. Recognized here through Langley’s graphic descriptions: Gluttony, “gulp[ing] down a gallon and a gill;” Wrath, with his “foul mouth” and “neck hanging;” Lust, arms reaching for the woman beside him; the Devil himself, producing demonic visions; the female incarnation of Pride; Envy, crouching in bitter anger “and a knife by his side;” Vainglory, gazing into a mirror; Greed, grasping at coins, “hungry and hollow;” and Sloth, slumped in general malaise, “beggared for [his] foul sloth” (William Langland, The Book Concerning Piers the Plowman, translated by Donald and Rachel Attwater, London, 1957, passus V).

The traditionally recognized seven sins are Lust, Gluttony, Greed, Sloth, Wrath, Envy and Pride. In this scene, the appearance of Vainglory as a self-involved subset of Pride (both female) features as an eighth figure in this scene, along with the Devil as the ninth. While some townspeople are aghast as the Sins squabble, in the background chaotic vignettes emerge. A twisted carnival of guillotines and nooses is shown alongside jesters and acrobats, a coffin is hauled away from the gallows which loom on the horizon, the procession led by a prisoner in ropes, accompanied by a monk. Around the guillotine behind Pride, an exchange of prisoners occurs, one approaching in a cart, the other being taken away in another coffin.

Nisbet's work is too rarely seen and the emergence of this large and ambitious canvas sheds light on her creative nerve and flair for dramatic, impactful compositions which should be celebrated. Sometimes described as “the last Pre-Raphaelite,” her broad influences and use of anachronistic imagery in contemporary narratives also invites comparison to her American peers, Maxfield Parrish and N. C. Wyeth.