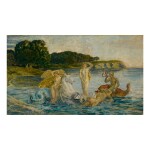 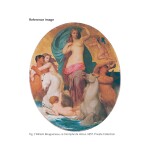 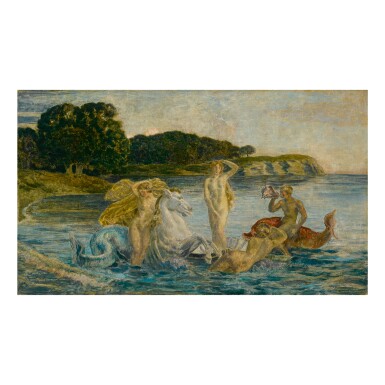 ÉMILE-RENÉ MÉNARD | THE BIRTH OF VENUS

ÉMILE-RENÉ MÉNARD | THE BIRTH OF VENUS

THE BIRTH OF VENUS

The following condition report was kindly provided by Simon Parkes Art Conservation, Inc.: This work is in very good condition. The canvas is unlined. There is one small reinforcement on the reverse corresponding to a restoration about an inch square in the tail of the hippocampus. Under ultraviolet light, one can see a few very small dots of retouching in the figure in the center, and a spot near the bottom edge beneath the hippocampus. Although some of the original color reads quite strongly, no other restorations are apparent. The work should be hung as is.

Symbolist painter Émile-René Ménard was born in Paris; his father was the Director of the widely read publication Gazette des Beaux-Arts and his uncle, Louis Ménard, was a philosopher. In a 1912 exhibition catalogue featuring Ménard’s work, it was noted that with this cultured upbringing “his intelligence could not fail to open itself to all forms of beauty, whether of reality or dream” (A Collection of Works by Members of the Société des Peintres et des Sculpteurs, exh. cat., City Art Museum of St. Louis, 1912, p. 53). He first began to paint landscapes in Barbizon and Normandy, inspired by his family’s friendships with Jean-Baptiste-Camille Corot, Théodore Rousseau, Charles-François Daubigny and Jean-François Millet, who often visited his home. The artist studied at the École des Beaux-Arts and in the studio of William Bouguereau at the Académie Julian. His academic training and exposure to seventeenth century masters of classical landscape such as Nicolas Poussin and Claude Lorrain were an important part of his artistic upbringing, but it was also his close study of the Impressionists’ radical new means of rendering light and his travels in Corsica, Greece and Sicily that would shape his Symbolist oeuvre.

Ménard is celebrated for his idyllic, classical scenes, which are usually set on the shores of the Mediterranean and feature familiar figures from mythology and Antiquity. The Birth of Venus depicts the goddess of love as she was born from a shell and brought to shore by an ocean breeze, flanked by sea-bound attendants: two graceful nymphs, a hippocampus (the mythological creature that is half horse and half fish), a dolphin, and a triton, a messenger of the sea whose conch shell has the power to control the waves. While Ménard likely drew inspiration for this popular subject from many sources, elements of the present work recall one of Bouguereau’s early depictions of Venus designed in 1857 for the Émile Pereire house in Paris (fig. 1).

The composition of The Birth of Venus is dreamlike as the soft purples and pinks of twilight reflect off the turquoise sea. Ménard’s paintings are marked by a recognizable pastel-colored haziness, as if his works are somehow inspired from distant memory. The catalogue that accompanied a 1975 Paris exhibition of the artist’s work notes that “it is in the quest of the eternal that Ménard shows the irreproachable beauty of the antique in these idealized landscapes. He filters and renders sublime those spiritual moments of twilight when all sinks into gloom, of dawn when all is reborn—the great symbol of death and life” (E.R. Ménard, 1862-1930: Symbolisme Intime, exh. cat., Galerie Tanagra, Paris, November 12, 1975-January 15, 1976, p. 7).