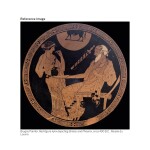 Thomas McLean, London (acquired at the above sale)

Manuel Cervantes, Mexico City (acquired at the above sale)

Private Collection, Los Angeles (by descent from the above)

Acquired from the above in 2009

By 1896, the year the present lot was completed, John William Godward had begun to name his classical models after important women of Greek and Roman history, literature and mythology. Though his figures were often depicted idling away long afternoons on Mediterranean terraces or in lavish marble interiors, names such as Andromeda and Campaspe connected them to a historical narrative. Briseis is described in Homer’s Iliad as the wife of King Mynes of Lyrnessus, who was celebrated for her beauty, though her story was marked by tragedy. Her town was an ally of Troy and, after it fell to Achilles and his troops, Briseis was taken as his concubine. Briseis famously came between Achilles and the King of Mycenae, Agamemnon, who demanded that Briseis become his own concubine, almost costing the Greeks their campaign in the war. Briseis was a decisive character in the Trojan War, and an apt heroine for Godward to depict.

Briseis is a showcase for Godward’s idyllic, classical world, from the exotic tiger skin and translucent white tunic to the woven tapestry in blue and gold featuring rosettes and Pegasus. While Briseis is far removed from the battlefield, there is a hint of melancholy in her downcast and contemplative gaze. From the Renaissance to the nineteenth century, Briseis is often depicted at the most dramatic moments of her story—either being taken from Achilles’ tent or mourning the death of his friend Patroclus— while Godward’s painting provides a more intimate view of the Trojan heroine.

The model in Briseis is Rose Amy Pettigrew, who began posing for Godward in 1887. Along with her sisters Harriet (Hetty) and Lily, she modeled for some of the best-known artists in London, among them James McNeill Whistler, John Singer Sargent, William Holman Hunt, Philip Wilson Steer, and John Everett Millais. The sisters were the most highly sought-after models in London because they had a very distinctive, pre-Raphaelite look (Swanson, 2018, p. 204). Rose Amy continued to model for Godward until she married Harry Waldo Warner (1874-1945), a famous violinist and composer, in 1896.