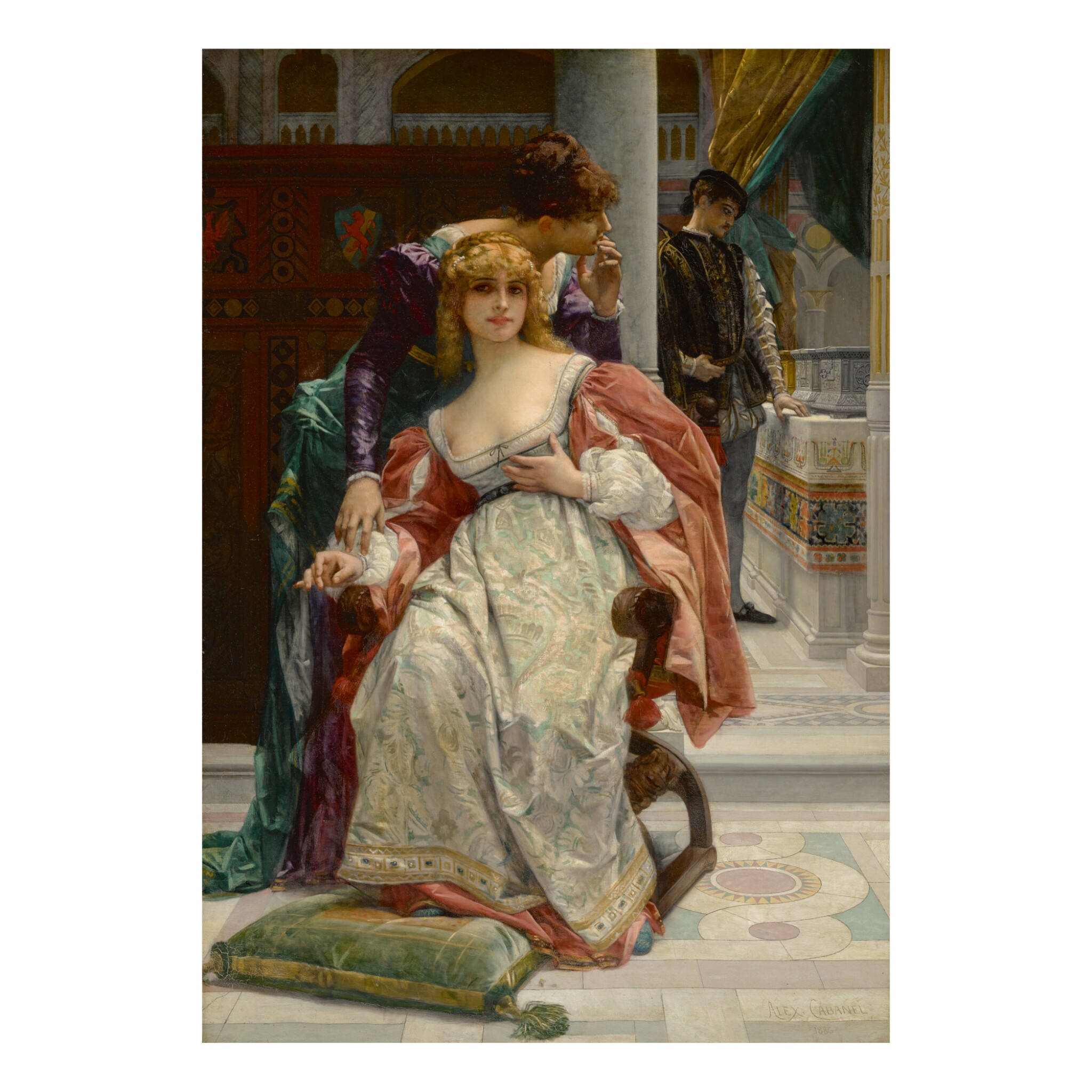 Private Collection (acquired at the above sale and sold, Shapiro Auctions, New York, May 21, 2016, lot 545, illustrated, as Portia and the Caskets, Scene from the Merchant of Venice)

Following on his compositions inspired by Hamlet and Othello, Alexandre Cabanel chose a Shakespearean play not often depicted by French painters: The Merchant of Venice. At the center of the plot is the heroine Portia, the beautiful, quick-witted and resourceful daughter of the wealthy merchant Antonio. The decision to depict this character could have been inspired by the popular and renowned 1878-80 Lyceum Theatre production of The Merchant of Venice in London, in which actress Ellen Terry, a favorite of the Pre-Raphaelites, starred as the female protagonist ("Les grands thèmes," Alexandre Cabanel 1823-1889: La tradition du beau, Sylvain Amic and Michel Hilaire, eds., exh. cat., Musée Fabre, Paris; Wallraf-Richartz-Museum, Cologne, 2010, p. 395, fig. 1).

In 1881, Cabanel completed a large-scale depiction of Act III, scene 2 of The Merchant of Venice, which was exhibited at that year's Salon (fig. 2), showing Portia and Bassanio, the young Venetian nobleman whom she loves. According to Portia’s father’s wishes, each suitor that seeks her hand in marriage must choose between one of three caskets: one of gold, one of silver, and the other of lead. Whichever suitor chooses the casket containing Portia’s portrait will become her husband; if he does not, he must leave the country and remain unmarried forever. The 1881 composition depicts the moment when Bassanio must choose between the caskets. He rejects the two most ostentatious caskets of gold and silver and instead selects the one of simple lead, proclaiming, "And here choose I; Joy be the consequence."

Five years after Cabanel’s first painting of Portia and the caskets, he approached the subject again but with a different compositional focus. La belle Portia is equally exquisite in its rendering of the heroine’s elaborate brocade dress as well as the cool marble and detailed woodwork of the interior. This Portia, with her strawberry blonde hair and striking eyes, could have been inspired by Ellen Terry’s performance. However, in the present work, Cabanel invites a psychological connection between the viewer and Portia, who, instead of turning to watch this pivotal moment, gazes away and clutches her heart as her future hangs in the balance. There is a pensive stillness, as only Portia, her lady-in-waiting Nerissa, and a suitor populate the scene. Though the 1881 composition emphasized the importance of Bassanio’s role in the plot, perhaps this man is just one of Portia’s many suitors and not her lover, her sphinxlike expression one of indifference.