Property from an Aristocratic Italian Collection 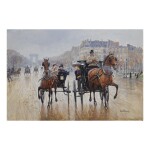 Property from an Aristocratic Italian Collection

We would like to thank Patrick Offenstadt for kindly confirming the authenticity of this lot which will be included in his forthcoming supplement to the Jean Béraud critical catalogue.

In 1889, a Danish visitor to Paris remarked that its boulevards were “the great rendezvous where the whole population flocks together to satisfy its great craving for sociability, where people meet with the wish of being together, and associate with the amiable courtesy and easy approach that is a consequence of the consciousness of being mutually entertaining” (Richard Kaufmann, Paris of Today, translated from the Danish by Olga Flinch, New York, 1891, p. 73). Jean Béraud captures this impression of busy “modern” life in Rond-Point des Champs-Élysées, a panoramic depiction of the iconic avenue, full of an uncountable number of carriages out for a day’s ride. In post-Hausmann-era Paris, the beau monde spent much of their day riding and promenading on the expansive and orderly boulevards and avenues— transforming them into plein air receiving rooms. Of all the streets, the Champs-Élysées afforded the best opportunities to see and be seen — particularly during a drive from the Rond-Point, a circular crossroads decorated with flower beds and fountains, to the avenues radiating from the Arc de Triomphe, seen in the background, and beyond to the Bois de Boulogne. As Béraud depicts in the present work, a social exchange between carriage riders, despite the quick pace of the horses and the chill in the air, was a commonplace sighting.

Rond-Point des Champs-Élysées helped earn Béraud his fame as one of Paris’ most scrupulous and devoted observers. As journalist Paul Hourie described: “When you paint scenes from everyday life you have to place them in their context and give their authentic setting. This means that, in order to be sincere, you have to photograph them on the spot and forget about the conventions of the studio. As a result, Jean Béraud has the strangest life imaginable. He spends all his time in carriages… in search of a scene” (as quoted in Patrick Offendstadt, Jean Béraud 1849-1935, The Belle Époque: A Dream of Times Gone by, catalogue raisonné, Cologne, 1999, p. 9). The artist’s ingenious mobile studio allowed careful study of the activity of the city, and this immediacy allows Rond-Point des Champs-Élysées to be both a fleeting moment of urban pleasure and a lasting document of contemporary social trends.

In the present work the artist captures the increasingly commonplace female carriage driver of the era, a trend noted in Croqueville's (pseudonym for the Duchess of Fitz-James) social history Paris en voiture, à cheval, aux courses, à la chasse (1892). From the 1850s women’s enthusiasm for driving grew, and through the following decades they moved from countryside outings to quiet morning rides in Paris until, by the 1880s, they routinely led carriages through the busy traffic of the afternoon. Indeed, Béraud’s confident, smartly dressed woman commanding a cabriolet with her male passenger anticipated les femme cochers, the first professional women cab drivers on the streets of Paris in 1907 (fig. 1).