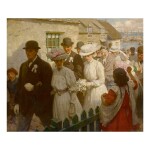 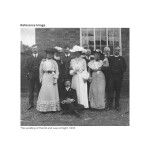 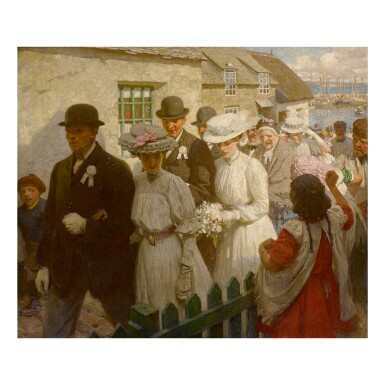 We would like to thank R. John Croft F.C.A., the great nephew of Dame Laura Knight R.A., R.W.S., for his contributions to the catalogue entry for this work, which will be included in his forthcoming catalogue raisonné of Harold Knight R.A., R.O.I, R.P.

The following condition report was kindly provided by Simon Parkes Art Conservation, Inc.: The work is in excellent condition. This work is restored and should be hung in its current condition. There are very few retouches. These retouches are all clearly visible under ultraviolet light—in the left glove of the mother of the bride and in the sky in a small group in the upper right and in a few dots on the extreme left edge. Any other unevenness to the paint layer when viewed under ultraviolet light is all original to the artist.

Harold Knight studied at the Académie Julian in Paris under Jean Paul Laurens and Benjamin Constant. In 1897, he trained at the Nottingham School of Art, where he met Laura Johnson (the future Dame Laura Knight), one of the most accomplished female painters of her age. The two married in 1903 and later became the first husband and wife Academicians in the history of the Royal Academy (Laura admitted in 1936, and Harold in 1937). In 1907, Laura and Harold settled in Cornwall, where they were central to the artistic communities in Lamorna Cove and Newlyn.

A Village Wedding was Knight’s first painting of Newlyn, where the work was first exhibited in 1908. Leaving St. Peter’s Church in Newlyn, the confetti-sprinkled bride and groom are likely from local fishing families. According to their friend Norman Garstin, the move to Cornwall from Staithes, in Yorkshire, precipitated in the work of both husband and wife "an utter change in both their outlook and method: they at once plunged into a riot of brilliant sunshine of opulent color and sensuous gaiety," which is evident in the brightly colored palette of the present work (as quoted in Caroline Fox, Dame Laura Knight, Oxford, 1988, p. 28).