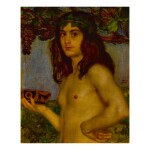 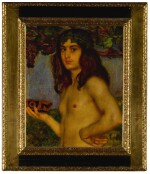 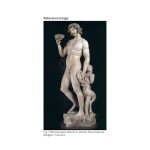 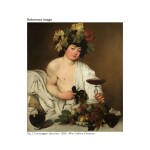 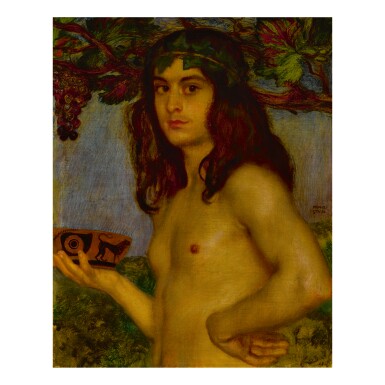 oil on canvas laid down on panel

We would like to thank Albert Ritthaler for kindly confirming the authenticity of this lot.

The following condition report was kindly provided by Simon Parkes Art Conservation, Inc.: This work is restored and should be hung in its current state. The panel is unbroken and shows original vertical battens on the left and right. The painting is clean and varnished. An old varnish had become slightly uneven in the lower right; there are three horizontal lines of retouching to address this, and another horizontal line in the lower center. The arm holding the bowl in the lower left has received a thin glaze to better match the tonality of the remainder of the picture. There is also one small retouching in the lower sky to the right of the bowl.

Munich, Internationale Kunstausstellung "Secession," 1900, no. 302a

Antiquity and mythology provided an endless source of inspiration for Franz von Stuck and rather than paint evocations of the classical past, his idiosyncratic interpretations engage a distinctly modern, psychological intensity. At the Fin-de-siècle, writers, artists and scientists were interested in the desires and anxieties of the human psyche, as well as questioning society’s moral, religious and spiritual constructions. Stuck’s art is connected and runs parallel to the influential work of his contemporaries Richard Wagner, Friedrich Nietzsche and Sigmund Freud, whose redefinition of sexuality and interpretation of dreams were reflected in Stuck’s wide-ranging oeuvre.

Dionysus, or Bacchus (synonymous with the name of his followers, the Bacchae), was the son of Zeus and inspired festivals and worship throughout the Mediterranean, in part for bringing mortals the gift of wine and its release from cares. He embodied the relentless energy that drives growth and transformation and was the god of epiphanies, arriving unannounced to overturn the bounds of daily life. He appears frequently throughout centuries of Greek and Roman art, initially shown as a powerful bearded figure in the sixth and early fifth century B.C., and is later depicted as a beautiful, languid youth. From ancient reliefs of sarcophagi and Attic vase painting to oils by Renaissance masters to contemporary art in the twenty-first century, the erotic charge of Dionysus has inspired artists for thousands of years, his symbolism almost universally understood.