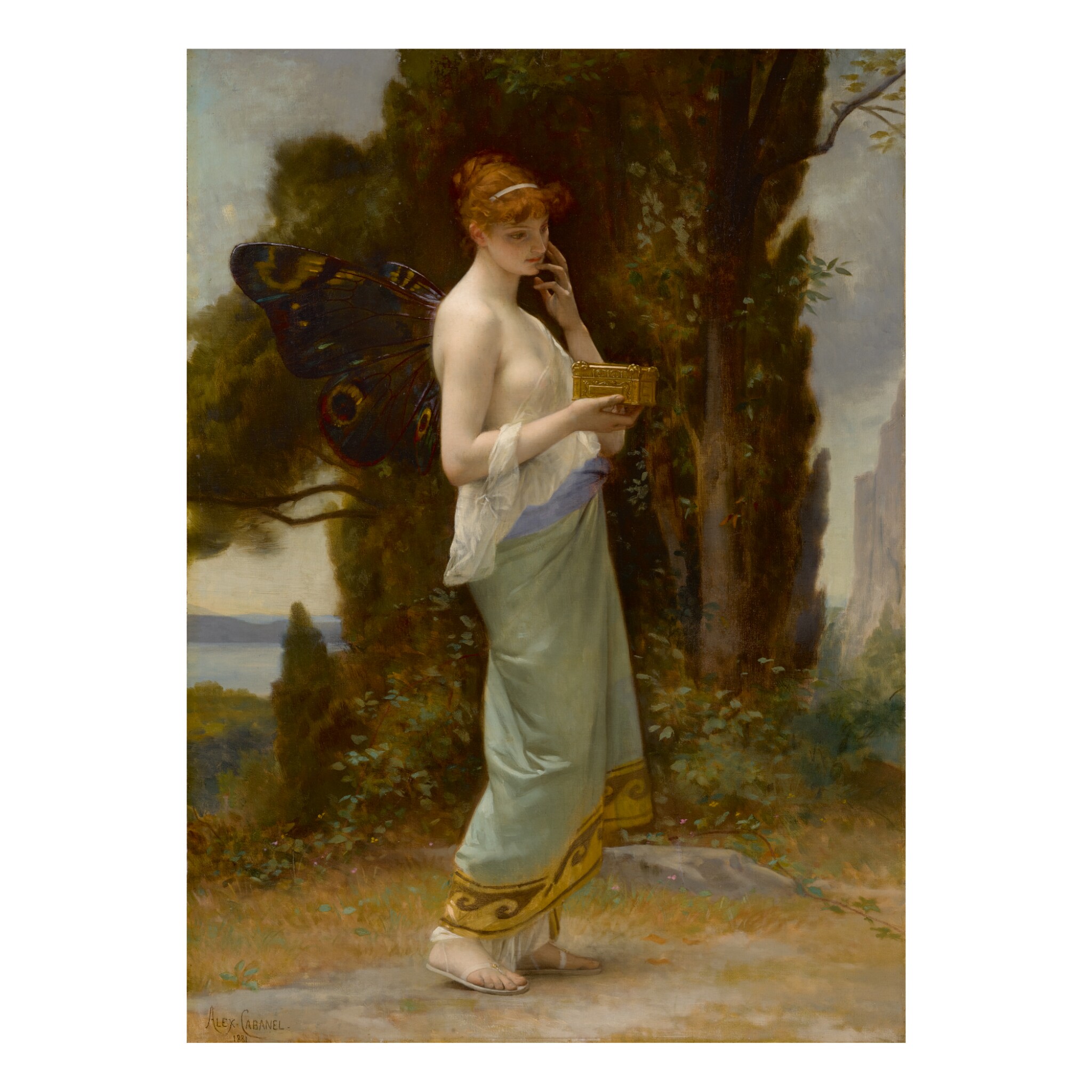 We would like to thank Stanley Mazaroff for kindly providing provenance for this lot.

Lined. The surface presents well. There are a few isolated pin dot accretions, including on the figure's proper right shoulder; and frame abrasion at the upper center edge with a few associated pin dot losses. Under UV: varnish fluoresces green. There is a 3 1/2 inch vertical repair to the right of the figure's knee (somewhat visible to the naked eye); a vertical area of inpainting on the tree at upper right; and a 3 1/2 inch horizontal line of inpainting at upper center. There are finely applied dots and dashes of reinforcement in isolated areas.

Please note that there is updated provenance available for this lot in the online catalogue.

Probably, Samuel Putnam Avery (acquired directly from the artist through George A. Lucas as agent, November 1881)

Entering the École des Beaux-Arts at the age of seventeen, Alexandre Cabanel achieved early success and became one of the most influential Academic artists of the nineteenth century, along with William Bouguereau and Jean-Léon Gérôme. After winning the Prix de Rome in 1845, he exhibited regularly at the Salon and his 1863 submission, La naissance de Vénus (Musée d’Orsay, Paris, a study for which sold in these rooms, February 1, 2019, for $175,000), brought him international fame and success and has since become an icon of nineteenth century painting. Because of this renown, Cabanel was frequently elected to the Salon jury, and as a professor at the École he taught many of the period’s most celebrated artists, including Jules Bastien-Lepage, Jean-Joseph Benjamin-Constant, Henri Le Sidaner and Aristide Maillol.

In Psyché, as in La naissance de Vénus and Echo (1874, The Metropolitan Museum of Art, New York), Cabanel has isolated a mythological figure in an evocative landscape. The tale of Cupid and Psyche greatly appealed to audiences for its obvious themes of love, beauty, jealousy and perseverance; with the ultimate conclusion that love conquers all. Psyche is shown here with an elaborate pair of butterfly wings, as her name in Greek literally means "soul" or "butterfly," and she has come to represent transformation and the human spirit's ability to emerge from darkness. She carries a small box, or pyxis, which she has taken to the Underworld in order to collect the beauty of Proserpina.

In myth, Psyche, a young mortal woman of exceptional beauty, drives the powerful goddess of love, Venus, into a jealous rage, and she commands her son Cupid to make Psyche fall eternally in love with a monster. Cupid approaches Psyche in her sleep and is so overcome by her beauty that he accidentally scratches himself with his golden arrow, falling deeply in love with the human girl. Venus devises a complex series of trials in response, intending to destroy the couple. Cabanel’s scene illustrates a pivotal moment of the final task, when Venus demands that Psyche travel to the Underworld. Not knowing how to get there, she climbs a tower with the intent to throw herself off of it and enter the world of the dead, but the tower speaks to her and reveals the route. The young mortal woman prevails, but upon returning to the land of the living she considers the potential power of the contents of the box, her moment of ponderance captured in Cabanel’s painting. Overcome by curiosity and hoping to acquire even greater beauty, she opens the box and falls into a deep, unmoving slumber. Cupid finds her and removes the cursed sleep and replaces it in the box, then lifts her into the heavens where the two are united in a marriage blessed by Jupiter. Psyche is ultimately transformed into a goddess.

The first owner of Psyché was the influential collector and agent George A. Lucas, and on November 17, 1881, he wrote in his diary “at Cabanel’s & paid 10,000 fs for picture of Psyche holding box –" (Randal, p. 531). As his biographer Stanley Mazaroff writes: “If Lucas had a favorite painter, it was certainly Cabanel. He likely fell in love with the artist’s luscious, over-the-top The Birth of Venus (La naissance de Vénus) which was the cause célèbre of the 1863 Salon. Thereafter, he referred to Cabanel by name no less than 165 times in his diaries. Lucas knew him not only by reputation but also as an active proponent of his art. He frequented Cabanel’s studio, studied his paintings, and in 1872 began to encourage his American clients, especially Henry Walters and Samuel Avery, to purchase the artist’s work” (Stanley Mazaroff, A Paris Life, A Baltimore Treasure, The Remarkable Lives of George A. Lucas and His Art Collection, Baltimore, 2018, p. 18). Lucas bequeathed most of his collection to Walters and much of it was transferred to the Baltimore Museum of Art, where Cabanel’s portrait of him hangs today.