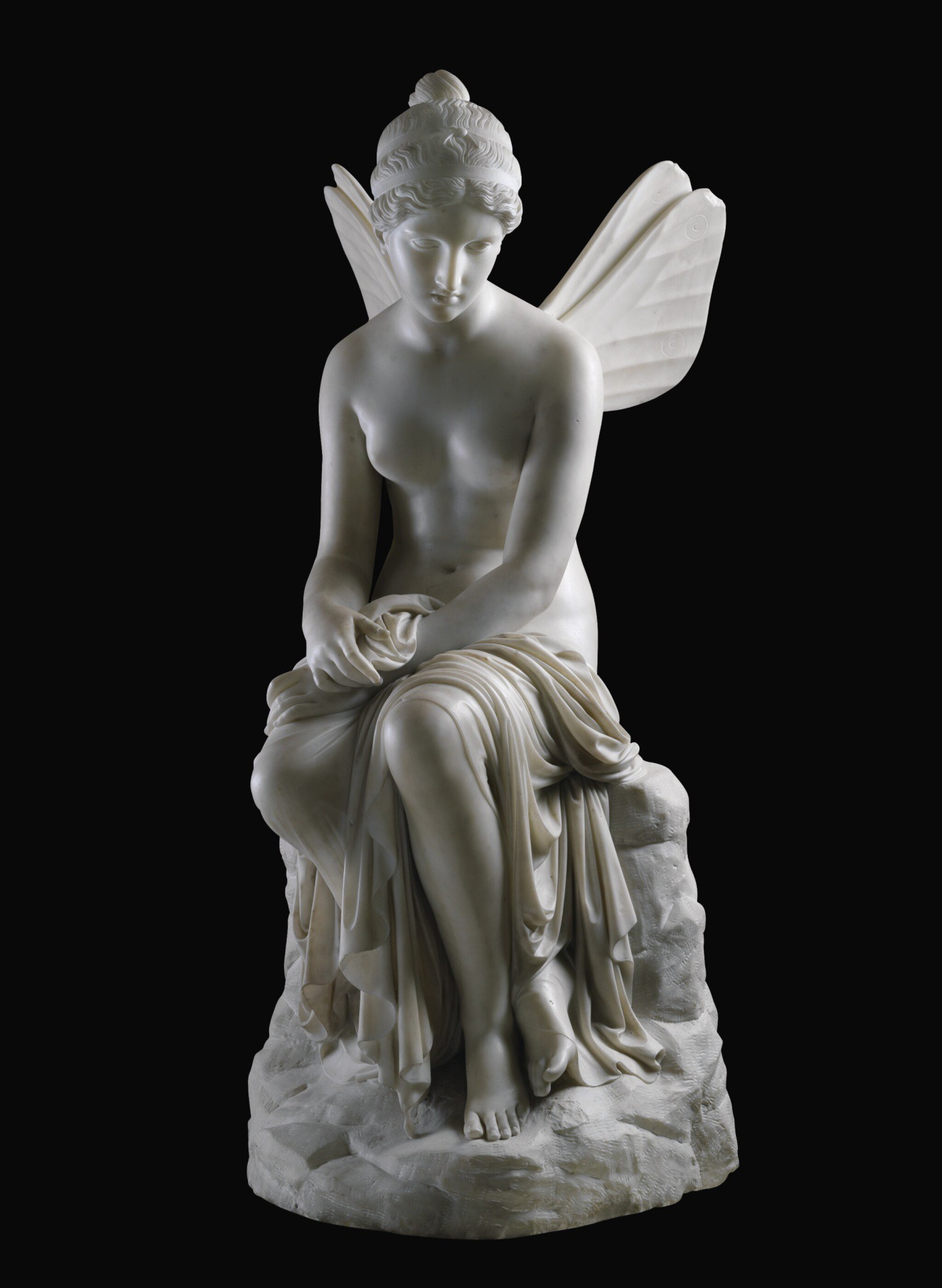 Overall the marble is in very good condition with minor dirt and wear to the surface consistent with age. The sculpture has a beautiful original surface which is well preserved, with standard minor abrasions, consistent with age. There are some natural inclusions in the marble. The proper right thumb is reattached. One curl at the back of her head is restored. There is a single chip to the upper edge of the proper right of wing, and some small chips and remnants of old repair to the upper edge of the wings on the proper left side. There are small areas of restoration at the original joint where the wings meet the body.

The Worshipful Company of Drapers;

Following the French Revolution, a new generation of European sculptors descended on Rome to seek their fortunes. Among them were Rudolph Schadow, John Gibson, Adamo Tadolini and Pietro Tenerani, all of whom encountered a city and a market dominated by the masters Antonio Canova and Bertel Thorvaldsen. Tenerani apprenticed with his uncle Pietro Marchetti from whom he learned how to polish and finish marbles. Upon winning a scholarship in 1815, Tenerani entered the studio of Bertel Thorvaldsen in Rome where he further honed his skills. He became a member and professor of the Accademia di San Luca and was later elected president. Among Tenerani’s illustrious patrons were William Cavendish, 6th Duke of Devonshire, Crown Prince Ludwig of Bavaria, Queen Victoria and Pope Pius IX.

Tenerani’s first model (in plaster) of Psyche Abandoned (Psiche Abbandonata) was made in 1816 and subsequently sold to the noblewoman Marchesa Carlotta de’ Medici Lenzoni. The antiquarian Giuseppe Antonio Guattani observed Psyche in Thorvaldsen’s studio and greatly admired the emotional realism and naturalism which differed from the colder Neoclassicism typical of the work of the leading sculptors of the time. Tenerani’s Psyche is introspective and demure, qualities which are underscored by the delicate carving of the soft flesh, her nearly transparent butterfly wings (one of the meanings of ‘psyche’ in ancient Greek is butterfly) and the textural variations throughout the carving. The level of finish in Tenerani’s body of work, including the present sculpture, is distinctive.

These subtle aspects of Tenerani's work were appreciated at the time by the scholar Pietro Giordani, who first contemplated Tenerani’s figure of Psyche at the home of the Marchesa Lenzoni in Florence. Some years later, in 1836, he made the sculpture the subject of a short book entitled The First Psyche by Pietro Tenerani:

'In the house of Signora Carlotta de’ Medici Lenzoni I met, and I saw several times a girl of fourteen [in] fifteen years, beautiful; [which] is really meant to be contemplated. Nor can anything else but look at it, with admiration, with affection, with desire to see it again but you cannot hope, but she hears you; much less that she answers you, all occupied by a melancholy, which in truth is beautiful and dear in that pretty and dear face. We talk about her a lot: no one would dare speak to her; because no one presumes to know how to console her.'

The model was exhibited at the Palazzo Caffarelli in Rome where Prince Clemens von Metternich attempted to acquire the Marchesa’s sculpture but agreed to wait for Tenerani to carve him a new statue. The prominent English banker Alexander Baring, also a patron of Canova, the French general Bertin de Vaux, the English Lord Tornvendson and Henry Labouchère, first Lord Tauton (the previous owner of the present sculpture) were equally dazzled by Tenerani’s depiction of Psyche and also commissioned figures from him. The present Psyche was included in the Royal Academy exhibition of 1846, where is garnered more accolades and was subsequently sold at auction in 1881. Recently, Stefano Grandesso (op. cit., no. 13) notes that the present marble 'cannot be identified with certainty' with any of the copies commissioned by the above mentioned noblemen. However, the most likely explanation is that the present piece was purchased by Labouchère after he had seen the original plaster model and ordered a marble version (the present sculpture), after which, in 1846, Labouchère lent the sculpture to the Royal Academy exhibition.

The story of Cupid and Psyche from Apuleius' Metamorphoses written in the 2nd century AD concerns the overcoming of obstacles and the ultimate union between Psyche ('Soul' or 'Breath of Life') and Cupid ('Desire'). Psyche was a princess so beautiful that the goddess Venus became jealous; and she instructed her son Cupid to make Psyche fall in love with a hideous monster; but instead Cupid himself fell in love with Psyche. He only visited her at night and ordered Psyche not to attempt to look at him but she disobeyed him and in doing so lost him. In her search for Cupid, Psyche undertook a series of cruel and difficult tasks set by Venus in the hope of winning him back. Cupid eventually could not bear her suffering and pleaded their case to the gods. Psyche became an immortal and the lovers were married in heaven.

With his chisel, Tenerani describes, in the present marble, the moment when Psyche loses Cupid. She is shown as an adolescent girl with a pair of wings, seated on a rocky outcrop with drapery falling gracefully on her left leg and covering her right thigh. Her head is slightly tilted to her proper left with her gaze cast downward, indicating her despondency. Her hair is gathered in a chignon fastened with two ribbons.

Tenerani’s Psyche Abandoned was considered one of the most famous Neoclassical sculptures and brought the artist widespread fame and notoriety which led him to produce numerous versions for patrons, with slight variations to each composition. In the wake of his success, Tenerani created his Psyche Fainting of 1822, now in the Galleria Nazionale d’Arte Modena.