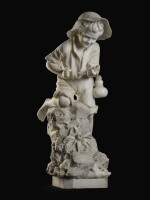 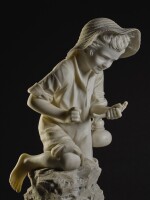 Overall the condition of the marble is very good with minor dirt and wear to the surface consistent with age. There is minor natural veining to the marble consistent with the material. There are some minor naturally occurring inclusions in the marble. There are minor chips and abrasions including to the edges of the hat, the underside of the proper right foot, to the proper right shoulder, to the edges of the base and to some of the high points of the rockwork. There are a few minor splashes of paint and dirt marks, including to the proper left shoulder and top of the hat. The fishing rod is lost.

Son of the sculptor Nicolò Bazzanti, Pietro was a central figure in the production of Florentine sculpture at the end of the nineteenth century. He is associated with such sculptors as Cesare Lapini, Ferdinando Vichi and G.Pugi, all of whom executed works bearing the inscription Galleria Bazzanti. These sculptors produced accomplished copies after the Antique and well known models by many of the greatest Italian sculptors including Donatello, Giambologna, Canova and Bartolini.

They were also responsible for a number of original genre pieces, capturing images from Italian pastoral and domestic life. Bazzanti's study of a fisherboy ranks amongst the finest compositions of this mode of sculpture, capturing in sensitive detail both the boy's expression of delight as he admires his catch and the realistic texture of the rocks and undergrowth beneath him, as well as the straw of his broad-rimmed hat. The signature in French on the present lot indicates that the marble was produced for the international market.