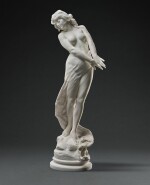 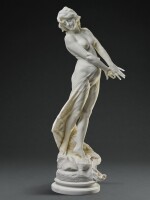 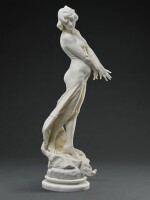 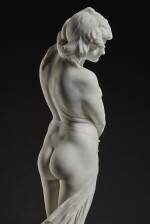 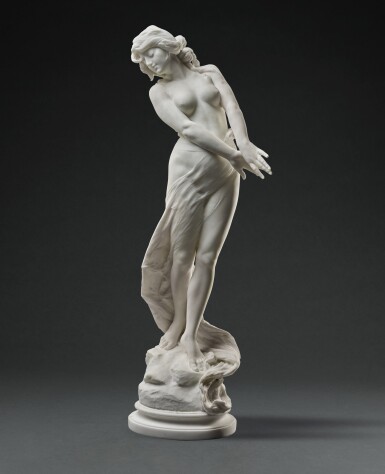 Overall the condition of the marble is good with minor dirt and wear to the surface consistent with age. There is natural veining to the marble consistent with the material, including some slightly open but stable veins to the proper left leg. There is a joint at the proper right little finger which may be original or an attachment. There is particular dirt to the proper left upper arm. There are minor naturally occurring inclusions in the marble. There are paint restorations to the back and back of the hair and to the proper left arm; these are probably natural inclusions which have been filled and concealed with paint. The surface is slightly dry in these areas. There are minor chips and abrasions including to the edges of the base.

Ferdinando Vichi was a prolific and respected sculptor in Florence in the last part of the 19th and the first half of the 20th century. An alabaster workshop was associated with his name in the late 19th century, and he was connected with artists such as Cesare Lapini and Guglielmo Pugi, established sculptors of the Galleria Bazzanti workshops. Although Vichi also worked on subjects after the Antique and Renaissance-inspired models, it was Romantic sculpture he truly excelled at. As his reputation grew, he received not only local commissions, such as a memorial for the fallen of World War I in his native Florence, but also for a more international clientele, who seemed to prefer his Romantic style. This elegant model is illustrative of the artist's imaginative idealisation of the female form. It demonstrates a high technical virtuosity, particularly in Vichi's mastery in the modelling of flesh, the serene facial expression, and the thin, seemingly translucent drape partially covering the Nymph's lower body. The gentle S-curve of the composition adds to the sense of elegance and serenity exuded by the figure.