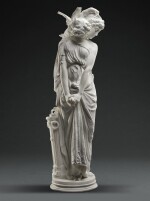 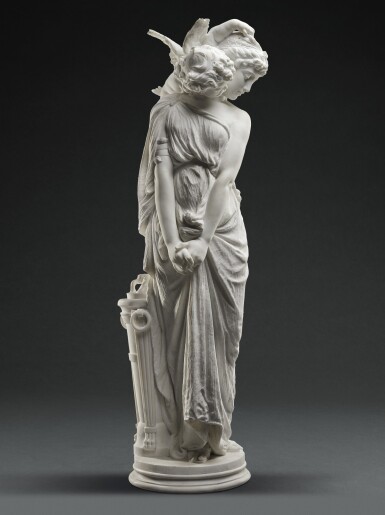 ATTRIBUTED TO ANTONIO ROSSETTI (B. 1819), ITALIAN, CIRCA 1880 | LA TENTAZIONE DI UNA VESTALE (THE TEMPTATION OF A VESTAL)

ATTRIBUTED TO ANTONIO ROSSETTI (B. 1819), ITALIAN, CIRCA 1880 | LA TENTAZIONE DI UNA VESTALE (THE TEMPTATION OF A VESTAL)

ATTRIBUTED TO ANTONIO ROSSETTI (B. 1819)

LA TENTAZIONE DI UNA VESTALE (THE TEMPTATION OF A VESTAL)

The playful exuberance of this beautifully carved, life-size marble is characteristic of the Italian sculptor Antonio Rossetti, who established an international reputation with his striking genre statuary.

Another life-size version of the present model, signed by Rossetti, was sold at Christie's Paris on 12-14 December 2018 as lot 75 (€90,000). The model can almost certainly be identified with La tentazione di una Vestale, which Rossetti is recorded to have exhibited in Rome in 1879. The modestly clad Vestal Virgin is being teased by an insolent putto representing the God of Love. Although the present marble is unsigned, the considerable finesse of its carving points towards Rossetti's authorship. Note the minutely textured surface of the dress and base, and the woman's intricately carved headdress.

Born in Milan, Antonio Rossetti received his initial training under Francesco Somaini before moving to Rome in 1843, where is documented to have been active until at least 1889. Rossetti's works were exhibited widely, including in Liverpool (1877), London (1888), and Chicago (1893). ATTRIBUTED TO ANTONIO ROSSETTI (B. 1819), ITALIAN, CIRCA 1880 | LA TENTAZIONE DI UNA VESTALE (THE TEMPTATION OF A VESTAL)
Lot Closed
Lot 50