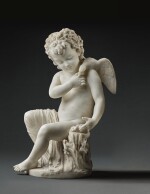 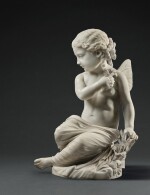 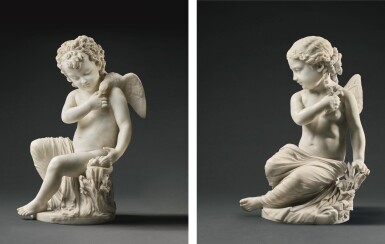 PIO FEDI | PAIR OF PUTTI AS ALLEGORIES OF PEACE AND INNOCENCE

PIO FEDI | PAIR OF PUTTI AS ALLEGORIES OF PEACE AND INNOCENCE

PAIR OF PUTTI AS ALLEGORIES OF PEACE AND INNOCENCE

A student of Lorenzo Bartolini, Pio Fedi rose to prominence as a sculptor in his native Florence. He continued his studies in Vienna before winning a stipend in 1840 to train with Pietro Tenerani in Rome.

An alert visitor to Florence who stands in the Piazza della Signoria and inspects the sculptures in the famous Loggia dei Lanzi, will be struck by an ambitious nineteenth-century marble group of the Rape of the Polyxena positioned between two seminal works from the Renaissance: Benvenuto Cellini's Perseus and Giambologna's Rape of the Sabines. Modelled by Fedi in 1855, it captures the political spirit of the time. The group was interpreted as the personification of the Risorgimento and resistance to domination by foreign powers. When it was inaugurated in 1866 it quickly became the most talked of sculpture in Italy, thus propelling the previously little-known Fedi to fame and rendering him the leading Florentine sculptor of the 1860s.

This charming pair of idealised children epitomises the purity of Fedi's artistic vision. Essentially neoclassical in style but imbued with a Romantic softness, the figures are conceived as allegories of the virtues of Innocence and Peace. The girl with butterfly wings alludes to the mythological character of Psyche, whose naivety and inexperience, as recounted in Apuleius' Metamorphoses, ultimately win her the undying love of Cupid. Peace - a subject which surely would have resonated with Fedi's compatriots - is represented as a boy attending to a dove whilst gently protecting her nest.