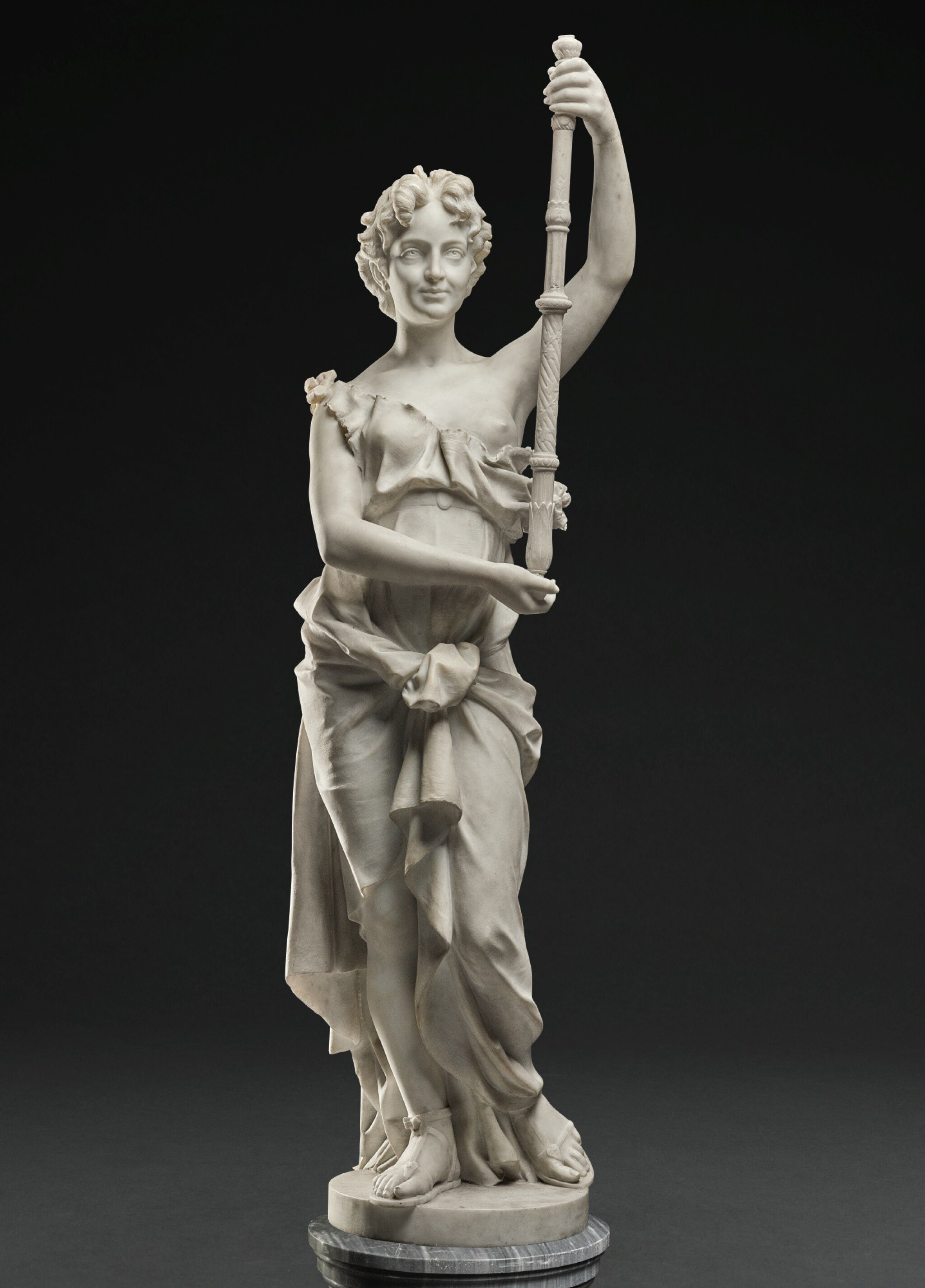 Overall the condition of the marble is good with minor dirt and wear to the surface consistent with age. The torch or staff is reattached in three places (with original pieces). The raised proper left hand has a joint at the wrist: this could be original or reattached. There are some marks to the proper right forearm and a small scratch near the collarbone. There is natural veining to the marble consistent with the material. There are abrasions to some of the edges of the drapery and a few small chips around the edges of the integral base. There are a few minor splashes of paint and dirt marks, particularly to the integral base and a few to the chest. The grey marble base is in good condition with general wear. The interior is hollow at the top. We recommend that this is filled by a conservator for stability (the figure sits on top).

Achille Canessa, born in Genoa, was active in his native province Liguria for most of his life. Having executed a monument for Garibaldi in 1885, he established a reputation as a talented funerary sculptor. His elaborate grave monuments can still be found across the region, including on the Staglieno cemetery in Genoa and the Zinola cemetery in Savona. His tomb of Vincenzo Aonzo in Savona is particularly noteworthy, displaying the sculptor's talent in creating complicated poses and swirling drapery (op. cit., pp. 286-287). Although Canessa's grave monuments found particular favour with the local community in Liguria, making him an exceedingly popular local sculptor (Sborgi, op. cit., pp. 380-382, lists over 120 works by Canessa, mostly at the Staglieno cemetery), he also exhibited internationally, most notably at the International Exhibition in Chicago. The work exhibited was a marble monument to Christopher Columbus, which was commissioned for the town of San Juan in Puerto Rico (another version of the statue is in Druid Hill Park in Baltimore). Canessa travelled to San Juan to oversee the completion and installation of the work, and stayed until its inauguration.

The present lifesize figure, possibly an allegory, shows an elegant woman clothed in ample drapery, holding a torch. The figure, with its realistic facial features and hair parted at the centre of the forehead, is reminiscent of the impressive figures on the Aonzo monument in Savona. Marbles by Achille Canessa are rare on the market, making the sale of this Torchbearer a rare opportunity to acquire a lifesize marble by the sculptor.