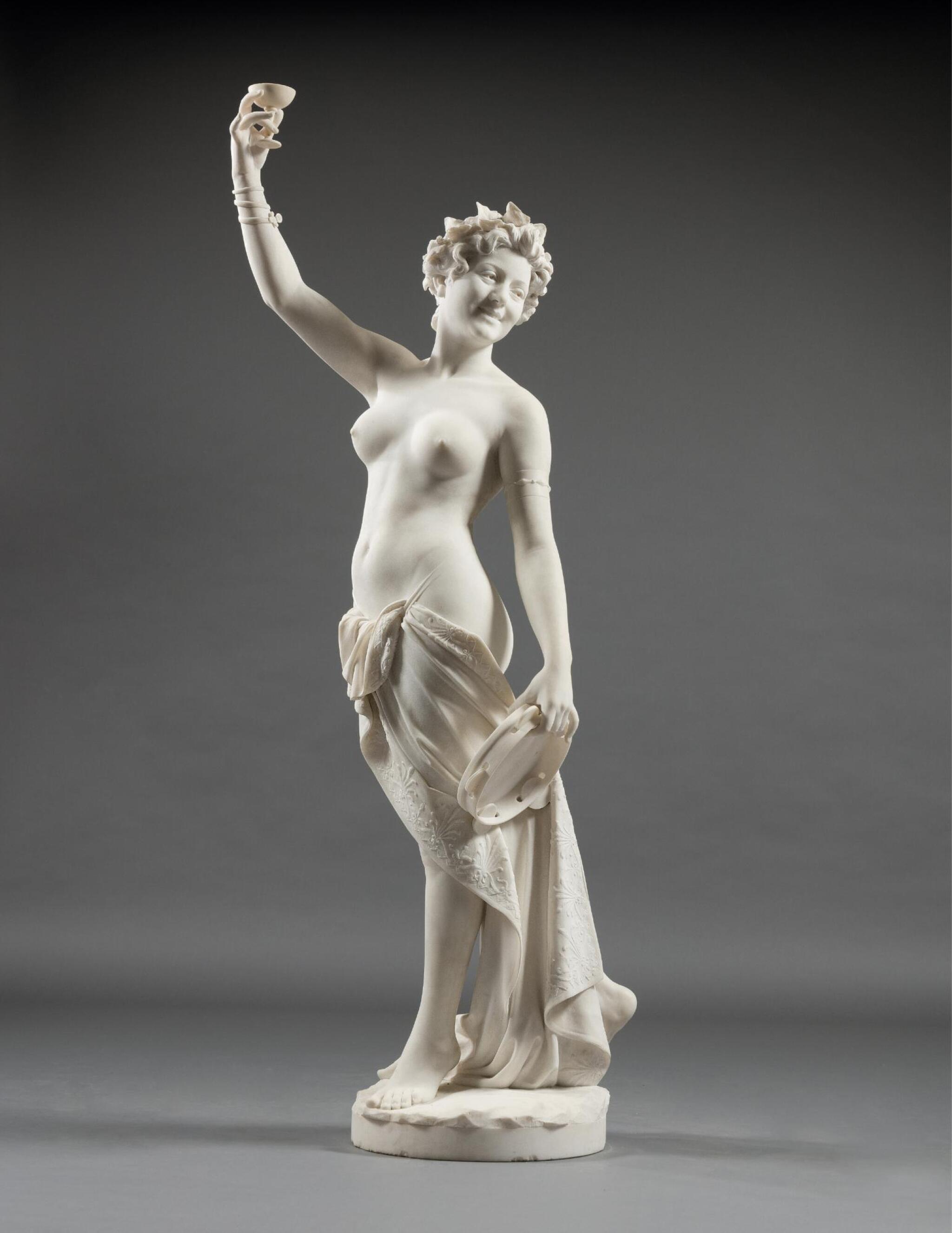 This exuberant marble represents an exciting rediscovery from the little-known oeuvre of the Florentine sculptor, Raffaele Bartoletti. Its beautiful composition and brilliant technical execution reveal Bartoletti to have been an artist of remarkable skill and imagination.

Garlanded with vine and raising a cup with her right hand, whilst holding a tambourine in her left, the ravishing nude depicted by Bartoletti is clearly identifiable as a Bacchante. In Graeco-Roman mythology, Bacchantes - also referred to as Maenads - were the female followers of Bacchus, the god of Wine. Notorious for their ecstatic frenzy brought about by dancing and intoxication, Bacchantes were celebrated as well as feared in ancient discourse. In classical Greece they were frequently depicted on clay vessels used in symposia, stimulating the intoxicating proceedings with Bacchic imagery. The present marble thoroughly embodies the sense of euphoria associated with Bacchantes. Looking over her left shoulder with a triumphant smile, the woman strides forward and shows off her beautifully arched form, with the flimsiest of drapes concealing her modesty. Her genesis in the distant, classical past is evoked by her exotic arm bands and the beautifully carved foliate pattern adorning her drapery, which is held in place by an insubstantial girdle.

The Bacchante’s raised right arm and dynamic pose are reminiscent of the celebrated Hebe by the great neoclassical sculptor, Antonio Canova. Bartoletti’s marble is, however, a wholly Belle Époque statue, imbued with an exultant eroticism only the late 19th century could have produced.

Born in Pistoia, Raffaele Bartoletti enrolled at the Florentine Accademia di Belle Art in 1872, becoming a prizewinner in 1879 and graduating in 1881. He clearly went on to have a distinguished career as a sculptor, as he is recorded to have exhibited across Europe. In 1900 his work was shown in Paris, and the following year he exhibited in Munich as well as Florence, in the latter with a plaster group titled Lezione d’amore (Love Lesson), which indicates that his favoured subject matter was genre sculpture.

Pietro Bazzanti was a central figure in the production of Florentine sculpture at the end of the 19th century. His highly successful studio was established by Pietro’s father, Niccolo Bazzanti, in 1822 and remains open today. Specialising in sculpture after the antique, as well as original allegorical and genre pieces, Bazzanti’s studio attracted accomplished sculptors such as Cesare Lapini, Ferdinando Vichi, Guglielmo Pugi, and clearly also Bartoletti, all of whom executed works bearing the inscription: Galleria Bazzanti.

The sale of the Bacchante presents a rare opportunity to acquire a beautifully carved, life-size female nude from the golden age of Florentine marble carving.