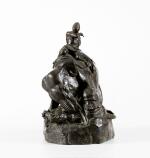 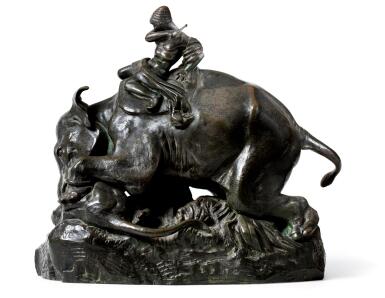 Overall the condition of the bronze is good, with minor dirt and some wear to the surface consistent with age. The bronze is cast in sections, and joints are slightly visible to the elephant's tail and neck and around the elephant's feet,

Barye combined classical technical understanding with the freedom and imagination of Romanticism. He was innovative in the production of his bronzes - he supervised castings and chased them himself until 1875.

Barye was fascinated by animals early in his career and studied them in the Jardin des Plantes, Paris, and drastically revolutionised the animal subject matter, which was rated low in hierarchy.

This lively image of an elephant crushing a tiger with a man sitting on top conveys a dynamic energy, typical for Barye’s animals and much liked by the Parisian bourgeoisie, his chief clientele.

Barye made different variations of this model, one without the man titled Éléphant écrasant un tigre, which was created for the Duke of Montpensier in 1847, and a more elaborate version titled Chasse au tigre made for the Duke of Orleans, which shows three men sitting on the elephant.

Un Indien monte sur un éléphant écrasant un tigre can be found in important collections, such as the Walker Art Gallery in Baltimore and the Louvre in Paris.