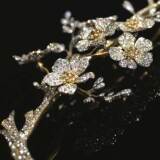 Established in 1821
Interested in selling a work by Vever?
Start Selling

Thanks to the seventh generation of this family of jewellers, Vever, associated with the most sumptuous creations of Art Nouveau, returns to Rue de la Paix. The event celebrates the two hundredth anniversary of the house founded in 1821 by Pierre-Paul Vever in Metz.
In 1870, Lorraine was annexed to Germany and his eldest son Ernest left his native city to settle in Paris. He was established at 19 rue de la Paix, in the most prestigious street in the capital. Ernest Vever was much appreciated among his peers and became President of the « Chambre syndicale de bijouterie, joaillerie, orfèvrerie».

In 1881, he handed over the business to his sons, Paul and Henri, who won their first Grand Prix at the 1889 World's Fair thanks to their "jewellery bouquets”. Henri Vever, as an Art Nouveau daring jeweller used unexpected materials like horn, ivory, enamels and hard stones to capture the beauty of nature into jewellery and collaborated with René Lalique and Eugène Grasset.

In 1924, Henri donated his collection of 19th century jewellery to the “Musée des Arts décoratifs” in Paris and, a generation later, the family donated to the museum the entirety of their photographic archives. Vever's work is also to be found in the Paris collections of the “Musée d'Orsay” and “Petit Palais”.